Commenting on the mass realization that Mercedes are super-conservative, only because the victim’s changed.

“My thoughts, prayers and condolences to everyone affected by the Paris attacks.”

You may or may not have noticed that I haven’t reviewed F1’s races around Mexico and Brazil. There’s a good reason for that – There was very little newsworthy actually worth talking about. Nico Rosberg has been perfect the last two races for Mercedes, and I already talked about him extensively last week and how he’s become the scapegoat for criticism in a sport insistent on keeping him in the corner, often for the sake of pushing Lewis Hamilton… Guess what? We got some more of that yesterday.

As I said, Brazil was average. A 5/10 race, given how I know you guys like it when I rate these things. Played out like a lot of average races in this era, Mercs in the distance, with Sebastian Vettel the only guy even close, only with the guy with the black helmet in front. I know, shocker right?

But there was something different post-race, and that was the media focusing on “dirty air” and the nature of being unable to pass at Interlagos, Martin Brundle really stirring the pot with his podium interview with Lewis Hamilton, like he wanted a juicy soundbite of Lewis complaining about the state of sport, to Sebastian Vettel reeling off lengthy quotes about how to improve the sport.

Now, I’ve said my piece of how to improve the sport before, but the problem I have with all this, is the approach of the mainstream media, and how many fans are now taking the bait with “dirty air”, improving the “show” and criticizing Mercedes for no good reason.

What many drew on for this race yesterday, was that Mercs didn’t let Hamilton change his strategy to try and get ahead of Rosberg, because he “looked faster”, just like Mexico a fortnight prior. Here’s the problem with that… Mercedes have no obligation to change from the optimum strategy just to please the fans, by taking an unnecessary risk. That’s kind of what F1 is all about, winning as easily as possible if you can help it. Y’know, that thing Alain Prost made an entire career out of. Sure, it’s not sexy, but it’s effective.

Here’s what people don’t want to admit – With Mercedes, whoever leads through Turn 1, wins about 80% of the time. Why? Because their leading driver has the benefit of dirty air, and they get first priority on pit strategy. It’s a near unbeatable combination, only broken a couple of times by Hamilton when the dirty air effect hasn’t been as bad, which isn’t as often as people think.

So when Rosberg gets criticized for “not giving Lewis a fight”, think about the uphill struggle he has to climb, because that’s what Lewis Hamilton had to experience yesterday. Mercs don’t care which driver is in front, as long as they take the 1-2, like any smart team would. If anything, they get ridiculously paranoid when another car’s in contention, because they’ve made strategical screw-ups on quite a few occasions. 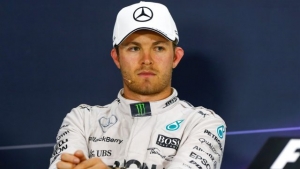 See, it goes back to that Rosberg column I wrote about last week, where I said that he’s often criticized for very small reasons. I don’t think it’s a coincidence that this conversation is gathering more traction, now the shoe’s on the other foot. There’s been instances previously this season where Rosberg has been stuck behind Lewis this season, such as Australia, and Canada, and the conversation about dirty air wasn’t anywhere near as bad as it is now, when Lewis is the unfortunate victim.

It’s a shame, because ultimately, I agree, it’s something that needs to be addressed, but it’s being used more as a convenient excuse for Lewis not winning, now the season’s over, and the media need a large narrative to tick over for the rest of the season now Lewis has won. It’s like it’s a surprise that Nico Rosberg is able to win from the front, something he hasn’t done 12 times before or something? So all those times Rosberg was in range and was a victim of dirty air, why didn’t we complain then? Why didn’t we give Rosberg the benefit of the doubt we’re so quick to give Lewis?

Remember China, where Nico Rosberg was vilified for speaking out about the nature of dirty air, and how he wasn’t able to pass Lewis? We just got a carbon copy of that in Brazil yesterday, and if anything, the media gave Lewis a back rub, a blankie, and a cup of cocoa in an understanding, grandmotherly sort of fashion, usually reserved for Danny Kent whenever he messed up in Moto3. See, this is the nature of a sport that doesn’t want to criticize Lewis Hamilton, because for many media members, he’s their meal ticket, and the thing the sport revolves around. It’s fickle and says a lot more about the agendas the media has and how the sport is portrayed.

And contrary to popular belief… Brazil isn’t that great a track when it doesn’t rain. People love it as a place and as a potential finale because it’s unpredictable, mostly for weather reasons but when it’s fully dry… It doesn’t deliver, like many of the more modern tracks that people can’t wait to bash, ala Sochi.

Like I said earlier, Dirty Air is a legitimate concern and something that needs to be addressed for 2017 when the car designs change, but right now, it’s more being used as another convenient stick to beat the narrative drum with, along with people digging up new excuses for Lewis, such as pit strategy, or the possibility of him “Phoning it in” now the season’s over.

Mercedes don’t owe us a damn thing, they just want to win, and are doing so in brilliant fashion. We as fans have a bloodlust for entertainment in a sport that can only do so much for that, given its other conflicts, like politics and technology. The sooner we just take things at face value, the sooner our collective blood pressure go down. And that’s hardly a bad thing.[/fusion_builder_column][/fusion_builder_row][/fusion_builder_container]