“…This is quickly becoming Jorge’s season to lose.”

Hey guys, Dre here again, and I’m back at it with another review, this time for Round 6 of the MotoGP 2015 Championship, in the 90,000 strong Italian Grand Prix at Mugello. In this round, Jorge Lorenzo confirmed his recent form with another incredibly dominant victory, but it was Andrea Iannone who would captivate the Italian crowds as he beat Valentino Rossi to 2nd, but with Marc Marquez in the gravel again, is his season over?

In other news, Tito Rabat roared back to his best with a narrow win over Zarco, and in Moto3, Miguel Oliveira made history as Danny Kent continued to cement his Championship campaign. All that and more in my Italian Grand Prix review!

This is becoming an ominous trend. Jorge Lorenzo may not have [/fusion_builder_column][fusion_builder_column type=”1_1″ background_position=”left top” background_color=”” border_size=”” border_color=”” border_style=”solid” spacing=”yes” background_image=”” background_repeat=”no-repeat” padding=”” margin_top=”0px” margin_bottom=”0px” class=”” id=”” animation_type=”” animation_speed=”0.3″ animation_direction=”left” hide_on_mobile=”no” center_content=”no” min_height=”none”][fusion_tooltip title=”I’m VERY suspicious Andrea Iannone jumped the start…” placement=”top” trigger=”hover” class=”” id=””]gotten the holeshot[/fusion_tooltip], but after passing him on Lap 1, Jorge was never seen again, taking the win by 5.5 seconds as the Ducati’s and the Honda’s went to war with themselves over 2nd place, with Valentino Rossi lurking in the wings.

Without any shadow of a doubt, Jorge is back to his utterly boring, but brilliant self. For those still unaware, I’m no Jorge fan at all, only rarely does he win captivating races, where the action tends to be behind him, but I can’t deny, when he’s in this form, he’s unbeatable and brilliant. And with Dovizioso having a sprocket failure, it’s becoming a two way fight between him and Valentino for the Championship as the two hold a near 40 point advantage over the rest of the field. Shades of 2009 anyone?

Meanwhile further down, it was Andrea Iannone who blew me away with a heroic ride to take 2nd place, his career high finish at his home GP, after a brilliant first career pole position the day before. And I love the fact he celebrated like he’d won! Considering he had fractured his funny bone and had a dislocated shoulder in Le Mans two weeks ago, this may be a ride of the season contender. He had yet another big fight with Marc Marquez, and this time, he came out the winner with that astonishingly fast Ducati proving a nightmare to pass on the 1.1km long home straight.

And with Iannone 2nd, and Valentino Rossi 3rd, the incredible Italian fanbase celebrated in force, because let’s be real here, no-one was here for Jorge. But with just 2 points separating the Yamaha pair as the calendar heads to Catalunya in a fortnight, the title race is looking interesting, but Vale needs more than 3rd places with the form #99 is in. I have a bad feeling, it’s Jorge’s title to lose… 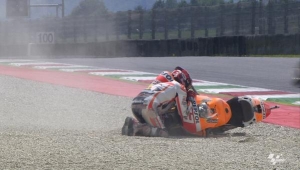 What a friggin’ Greek Tragedy from the reigning Champion this past weekend. After crashing in qualifying and dropped out of Q2 by Yonny Hernandez, Marquez pulled off one of the greatest starts in MotoGP history as he surged from 13th to 3rd in the space of a lap and a half. Astonishing stuff from Marc and a reminder of what a special talent he can be… before he lost the front end in Sector 1 and next thing you know, he’s in the gravel and out. A valiant effort but alarm bells are ringing in the Honda camp.

It’s becoming more and more evident that Marquez has a bike that doesn’t suit his riding style this time around. Many have been quick to point out their problems, like Nicky Hayden’s former crew chief, as well as Motorbike expert David Emmett, who have said that due to the aggressiveness of Honda’s engine this season, they’ve turned the Factory Honda into a bucking bronco… not the best combination for a guy like Marquez, who’s essentially redefined the style of riding a bike in this era and is already at the ragged edge half the time.

I suspect Marquez is flattering that Honda and is at 100% to salvage any kind of result, and with Dani Pedrosa still on the mend from arm pump, and 3 seconds off the nearest factory bike, Honda’s got some work to do. Sure, they’ll fix this problem, but this season may have to be abandoned. Yamaha have won five out of the six rounds this season, and with the seamless downshift finally working on their bikes, it looks like no-one’s cracking that team this season.

I do hope Marquez bounces back. He’s a mega star, and exactly what the sport needed and needs, and even through his struggles, he remains thoroughly captivating. He gave us MotoGP’s version of Ayrton Senna in Donington 93’, and that was awesome. 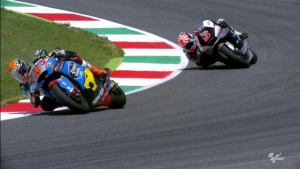 Welcome back, Tito! A well-judged, metronomic performance from the reigning Champion as he took a narrow, but a relatively comfortable win in the end, despite Johann Zarco’s late surge towards the end. It was a tense race, but in typical Moto2 fashion, not the most entertaining. I think we peaked at about Lap 3 when Simone Corsi at home went around the outside into Turn 1, not seeing Sam Lowes on the tighter line, and colliding with him. Corsi paid the karmic penalty with him binning the bike in the gravel, but Lowes lost several seconds as he ran wide, in his own words “cost him a podium” and saying “Corsi was a bit stupid”. Hard to disagree with the man, bonehead pass attempt from Corsi, and the second time he’s done this this season, like he did with Rabat at Turn 1 in Losail.

Also, in a reverse kinda day, it was Thomas Luthi who hit the deck in a rider error, while his struggling Kalex teammate Dominque Aegerter bounced back to take his first podium of the season in 3rd, narrowly beating out Sam Lowes for it. A brilliant performance from Dommy and I’m glad to see him in the mix again. I hope it continues, as I’ve always had a soft spot for his near dirtbike riding style! Props to Luis Salom and Julian Simon for their 5th and 7th place finishes as well, a much needed Top 5 for Salom who’s had a rollercoaster of a time in Moto2 to date. And props to Speed Up, they may not have won at home, but their bike is legitimately competitive and that deserves some serious praise. 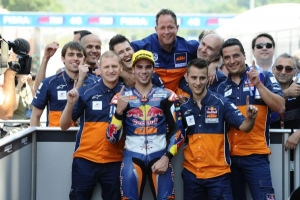 This was definitely overdue, but congratulations to Miguel Oliveira for a brilliant performance and his first Moto3 win, narrowly beating Danny Kent by just 0.071 of a second to take the win. A historic performance as Miguel became the first Portuguese rider to ever win a GP race, and a much needed win for the KTM factory team, as Honda have been giving them a spanking all season long. Just like last year too, we had another finish for 3rd as Romano Fenati just managed to hang on a hometown scrap against his former teammate, Francesco Bagnaia.

In a weekend where the Top 2 classes were thoroughly mediocre, it was a pleasure to see that once again, Moto3 absolutely delivered in another slipstreaming classic scrap, with just 2 seconds covering the Top 10. Danny Kent won’t be over the moon with 2nd, but he’s still extended his Championship lead to 46 points, and with no clear #2 title rival at the moment, the consistency of Kent is all he needs at the moment, and he’s doing an outstanding job. Remember when we all thought Fabio was an instant title contender? Amazing how quickly things change.