“Mercedes shoot themselves in the foot. According to the Internet anyway.”

You mean the Internet over blew a Mercedes error? Never. Hey guys, Dre here for a review of the Monaco Grand Prix of 2015, and in this review, we talk about the shocking incident from Mercedes under the Safety Car that arguably robbed Lewis Hamilton of his first Monaco victory since 2008, as well as Nico Rosberg making history with his third consecutive Monaco win. We’ll also talk about how it was blown WAY out of proportion, as well as the Max Verstappen/Romain Grosjean crash and the Alonso/Hulkenberg tangle, and why Monaco has to go. So, let’s talk about the worst Monaco GP ever… until the last 15 laps. 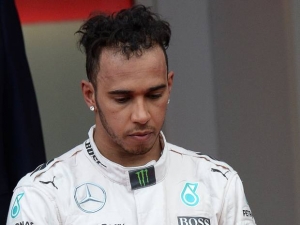 Whoops. It was the pit stop that changed the entire dynamic of the GP. With only 10 laps to go, Hamilton makes an unscheduled pit stop under the safety car with a 23 second lead, for seemingly no good reason, essentially gifting Nico Rosberg his third consecutive Monaco victory, with Nico becoming only the fourth driver ever to pull off a hat-trick on the streets. It cost Hamilton 10 points, with him finishing 3rd behind Sebastian Vettel’s Ferrari, with Lewis himself declaring Vettel “impossible” to pass, despite the new set of Super Soft tyres he was using.

Mercedes effectively crapped the bed on this one. A technical glitch had told Hamilton that Rosberg had pitted, when he actually hadn’t, and with Hamilton thinking his tyres were losing temperature, he pitted for a fresh set, even though the team had advised him not too, according to Lewis himself who said: “I saw a screen and thought I saw Nico had pitted, the team told me stay out. I said the tyres were bad and wanted to pit…”. Now if that isn’t Lewis admitting at least partial responsibility for what happened, then I don’t know what is.

To all our disappointed fans out there, we feel your pain. We got it wrong today and that’s the simple fact. We will grow stronger from this

Mercedes were more than willing to take the rap on Twitter for it, almost unfairly because no-one held a gun to Hamilton’s head and forced him to pit now did they? It was a collective mistake from the team and from Lewis himself, because after all, this is the Internet, and it needs someone to blame. My first thought this morning was: “Shit, we all need to calm the hell down, given this was a mistake that cost Mercedes a grand total of… 3 points.”

A Mercedes driver still won, and it was only a 1-3 as opposed to a 1-2. I would say I’d have made a bigger deal out of this if it weren’t for Vettel being unable to catch Rosberg on the undercut and costing the team a win, but let’s be real here, we’re only going mad here because Lewis Hamilton was the victim. If the roles were reversed, I suspect the much more prominent Hamilton fan base would be too busy going mad at how lucky they were to get gifted a win at Rosberg’s best track.

Lewis Hamilton was very unlucky yesterday. No-one’s arguing that. The team made a minor mistake. But this is the Internet. And anyone who was criticising Nico Rosberg for winning lucky, missed the point, and are idiotic. It’s not his fault that the team made a mistake. Don’t take your frustration out on him, just because he benefitted. I applaud the class that Nico showed after celebrating his win, and the relative good grace that Hamilton (eventually) showed, because he’s be real here, he was going to leave the car outside the tunnel and probably [/fusion_builder_column][fusion_builder_column type=”1_1″ background_position=”left top” background_color=”” border_size=”” border_color=”” border_style=”solid” spacing=”yes” background_image=”” background_repeat=”no-repeat” padding=”” margin_top=”0px” margin_bottom=”0px” class=”” id=”” animation_type=”” animation_speed=”0.3″ animation_direction=”left” hide_on_mobile=”no” center_content=”no” min_height=”none”][fusion_tooltip title=”Sorry, been watching WAY too many Scrapheap Challenge re-runs on Dave.” placement=”top” trigger=”hover” class=”” id=””]sail back to Stevenage via a custom made boat[/fusion_tooltip].

Let’s not forget what caused said 15 lap drama. This is a tight one, with Max Verstappen trying a bold pass into Turn 1 on Romain Grosjean, and him clipping the rear wheel of RoGro’s car, before hurtling into the padded barrier at a mere… 177 mph. Jesus. Says a lot about how far we’ve come in terms of car safety when that happens, and yet Max can climb out of the car 10 seconds later without a scratch.

Max has since been given a 5-place grid drop for the Canadian GP as a result of causing a collision, and while many speculated that Grosjean brake checked him, I still think Max was going into the corner too hot and committed to the move rather late. I think that was the right call from the stewards on this, as with the 5-second time penalty they gave Fernando Alonso for his contact with Nico Hulkenberg, as “random” as Fernando himself seems to find it.

I know many people will argue that the stewards need to be more consistent, I also accept that’s going to be near impossible with the fact that they change every GP. If they were the same every time, many fans would accuse them of corruption. Can’t win if you try really.

As for people like Felipe Massa and Romain Grosjean, who couldn’t wait to bury the kid afterwards, feel free to ignore his very impressive start to the season, not to mention the fact he’s already a future star in the making. It just makes you look stupider. 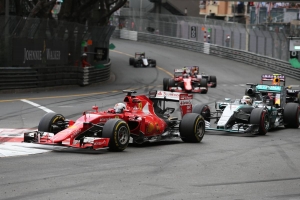 [/fusion_imageframe]Why are we still coming here?

I’m just going to come out and say it – WHY ARE WE STILL COMING HERE? The first 65 laps of that race were some of the most boring F1 I’ve ever seen. I was seriously going to give this race a 2 out of 10 score, because next to nothing happened for the first 85% of it.

Monaco doesn’t fit modern F1 any more. It just doesn’t. It’s near impossible to pass, even with DRS, and qualifying becomes the most important part of a race weekend, and that should NEVER be a thing.

I totally get that its a nice spectacle event and that it looks nice, but it’s out of touch now and it just doesn’t produce exciting races any more. Last year was a fluke and I don’t care what anyone tells me. Monaco has to go. I’d rather get that Azerbaijan street race off the ground, at least we’d have something new to look at.

PS: If you haven’t already seen it, feel free to check out my video version of this highly captivating classic: