“The Return of The Hamilton.”

Welcome back to the status quo. It was time for Round 7 of the 2015 Formula 1 Championship as the circus headed to Montreal and the Circuit Gilles Villeneuve. And on this occasion, it was Lewis Hamilton that took his 44th career pole, his 4th win of the season, and his 4th win in Canada, in a controlling victory where ol’ Nico just had no answer for him.

But it was further back where the fireworks too place, as Felipe Massa and Sebastian Vettel had to claw their way back from disastrous qualifying sessions, with surprisingly strong results. So, let’s break down what was a mediocre, but talk worthy Canadian GP. And don’t worry, I’ll be addressing that statement in this review too. 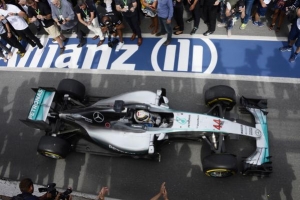 All Hamilton had to do, was to make sure that he stayed ahead into Turn 1. He did, and that was pretty much the end. I feel a little bit bad for Nico Rosberg, he and Lewis were so evenly matched in the 2nd half of the race, Rosberg just couldn’t stay with him given the dirty air, and the subsequent braking problems he had in the race. If anything, I was just waiting for an attack that just didn’t materialize. Hamilton claimed he was “always in control” and I can definitely see why. Rosberg just doesn’t have a consistent answer to win a race against Hamilton right now, and it’s only going to hurt him in the long run.

It was a weekend of 4’s for Lewis Hamilton, as he scored his 4th win of the season, his 4th win in Montreal, his 44th pole position, and his 14th consecutive podium, putting him just 5 behind the all-time record of Michael Schumacher’s 19, and Fernando Alonso’s 15. Just me, or this season looking very ominous already, with no real threat from behind? 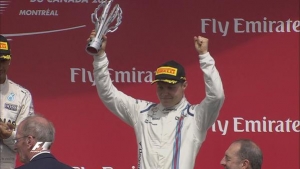 [/fusion_imageframe]Williams Back On The Podium, Kimi struggles

Well done Val Bottas for a superb performance to score Williams 1st podium of season, breaking the trend we’ve seen so far this season. Before this race, 17 of the 18 podiums spots had been taken by Hamilton, Rosberg and Vettel after all. He took advantage of a Raikkonen spin to pass in the pits, and he did a brilliant job of making an impromptu 1-stopper work after Williams admitted that wasn’t the original plan, but Bottas going 28 laps on the Super Soft tyre with solid pace, made the difference.

Kimi Raikkonen had another sloppy performance, a spin on his new tyres, effectively wrecking his race and demoting him to 4th. Not a good look when Ferrari boss Sergio Marchionne was in town. Even more so with his teammate being faster than him in the latter stages of the race, despite being on the slower compound tyre. This was a weekend where Raikkonen could steal some headlines, but unfortunately, it was for the wrong reasons. 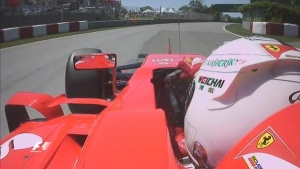 Props to them both for some solid passing attempts as well, Felipe Massa in particular, who had a superb dice with Sauber’s Marcus Ericsson in the early going, the pass of the race into Turn 1. Sebastian Vettel was in the wars a couple of times, he himself claiming he was “too aggressive” early on, but did a good job in dealing with a very defensive Fernando Alonso, and a near collision with Nico Hulkenberg, who had to spin over the inside kerb on the final chicane to avoid contact. Hard, but good fair racing.

Vettel was reasonably pleased with his 5th, and if anything, he was too harsh on himself. I think he was the driver of the day, and it only makes you wonder what could have been if he hadn’t have had that penalty for passing under a red flag, a really dumb move from the former Champion. Still, Vettel hasn’t finished a race outside of 5th this season so far. Given Mercs stranglehold, he really can’t be asking for much more at the moment. Apart from maybe a wrench in a Mercedes gearbox. 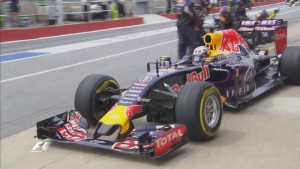 Yikes, 7 Mercedes powered cars in the Top 10? Did we travel back in time to last year? Danill Kyvat was the only Renault powered car in the points, and the difference in power-units are making a big difference, with Lotus getting both cars in the points for the first time since 2013, and Nico Hulkenberg back in the points as well as the usual suspects. Daniel Ricciardo in 13th, his lowest finish since joining Red Bull, and the Toro Rosso’s were nowhere to be seen.

And it’s not going to get any better for the Milton Keynes bunch, given that Austria and Britain are fast on the horizon. A great performance from the Lotus team though, they’ve not looked this strong since that 2013 season of old, despite Romain Grosjean’s silly collision with Manor’s Will Stevens.

Much has already been made of Red Bull’s struggles, so I’d be sounding like a broken record here, but when Daniel Ricciardo, the happiest guy in the world, can only laugh when talking about bad the car is at the moment, a solution needs to be made, and fast, the last thing Red Bull needs is a threat from the midfielders. Because there’s a good few tracks similar in nature to Canada, and it looks like a pain train might be coming. But hey, at least they’re not… 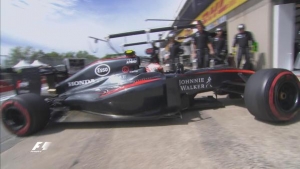 The struggle continues down in Woking, as McLaren-Honda suffer yet another double DNF, a humbling after scoring points in Monaco. Jenson Button failed to qualify and had to take his 5tn engine parts, leading to drive-through, but had power issues the whole way through, and it says a lot when Fernando Alonso called the team “amateurs” and wanted to forget fuel management, after his dice with Sebastian, a clear statement of “what’s the darn point in fuel saving, we’re not going to finish anyway!” and right he was.

Ron Dennis said before the race: “We’re going backwards to go forwards”, but there’s very little forwards progress here and we’re nearly halfway through the season, with a car that has a greater than 50% failure rate. That’s completely unacceptable if you’re Manor, let alone a team with the prestige and resources of McLaren AND Honda.

I know so many McLaren fans on the Internet, and they are an extremely passionate and understanding bunch, and I totally understand their frustration. I think they will get there… just not anytime soon. 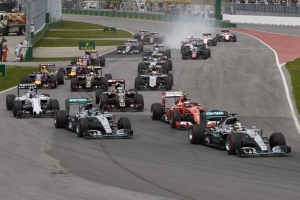 Canada 2015 was only a decent grand prix by anyones standards… my response to that is, well, what did you expect? In the words of my Dad when I couldn’t get a Playstation 2 for my birthday, “They can’t all be winners, kid.”

Canada has had two of the best races of the 21st Century of decent times, with 2011 and 2014 being classics for various reasons. Not every Canada race is going to produce a belter. No wonder 2013’s mediocre showing was forgotten about so quickly.

For me, if an F1 season has 3 really good races, it’s a pretty great season. 2014, we got spoilt with 3 classics in Hungary, Bahrain and Canada. This era, has been surprisingly good so far, despite the largely mediocre 2015 season so far. I just think we hold Canada to too high a standard. It’s just a track. I know some are more likely to produce a crazy race than others, but if you spun every race on a roulette wheel since the turn of the century, the odds of watching something better than a 7/10 race, are pretty darn slim.

Canada yesterday, was about as good as a race could have gotten given there was no differing strategy, or major incidents that dramatically altered the race. And those, are less common than you think. A shame we didn’t get a battle at the front, but that’s hardly a new thing in this era of V6 hybrids. Let’s suck it up people.