Well… that was certainly newsworthy at least. Round 7 of the MotoGP Championship had the crazy train head to Catalunya for the 2nd of four Spanish rounds, and while the story at the top was the same, the story below was anything but. Jorge Lorenzo took his 4th consecutive win, with Valentino Rossi right behind him, but it was a war of attrition and shock over the course of the weekend, with unlikely pole sitters, more guys in the gravel than the Le Mans 24 Hours, and Marc Marquez cracking under pressure. All that, and some amazing tactical riding in the lower classes. All that and more as I take a look back, at a crazy Catalan weekend. 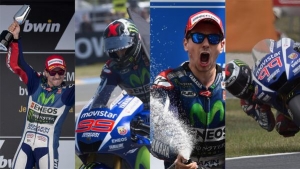 [/fusion_imageframe]Jorge Lorenzo Does It Again

The phrase: “I survived the 2015 Catalan Grand Prix”, should be printed on a T-Shirt very soon. Or at least made into a meme, because that’s how the Internet works these days.

Jorge Lorenzo, was Jorge Lorenzo. Simple as that. I’d talk about his performance more, but given the previous three races, I’d sound like a broken record. He took the holeshot, and held on as Valentino Rossi tried desperately to reel him in, but he just couldn’t manage it. Jorge said after the race that “That was the most I’ve ever pushed, in my life.”, and Lorenzo’s style is so smooth, you’d never have guessed he was at 100% to try and hold off a riled up Vale.

As Vale said in his post-race Interview, his pace was equal, if not slightly better than Jorge’s, but once again, he gave himself way too much work to do, by qualifying 7th on the grid. He was lucky some of his other contenders hit the deck, making his job a little easier, but if Valentino really wants this title, he HAS to improve his one-lap pace, because he can’t afford to keep giving up vital seconds at the start of the race to Lorenzo, with one of his main strengths being the fact that he’s an excellent starter.

This is the best Jorge Lorenzo I’ve ever seen at the moment. He just set a new MotoGP record with over 100 consecutive laps led. Right now, he’s looking borderline invincible. He’s not captivating to watch in any sense, but when you’re that good, you have to stand up and applaud what he’s doing. Because right now, it’s been nearly 2 months since anyone gave him a decent race. 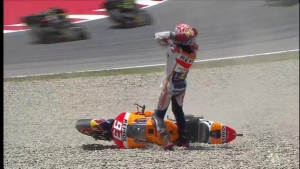 [/fusion_imageframe]The End Of The Line for Marc Marquez

And so it came to pass, that Catalunya was the race that Marc Marquez kissed his hat-trick goodbye, in a glorious case of over-worked brakes and an explosion of gravel.

It’s hard not to feel for Marquez. Again, broken record alert here, but every MotoGP fan knows what the real deal is here with him. When you’re on a bike that doesn’t do what you want it to do, you’re going to struggle, especially when you have a resurgent Yamaha in the same field as you, and the strongest field in the sport’s history. Even more so, when you were a master of the previous year’s Honda and what it could do.

Marquez’s crash in the early stages was the act of a desperate man, who knows he probably has little left to lose, and who knows, the only way he has any slim chance of winning the Championship from 50 points back, is to attack Jorge at the throat. Even if he overcooked it. I don’t know why so many people were surprised when he crashed, given he said he’s in a “win it or bin it” situation with this 2015 Honda and that he’s not going to stop riding his usual style to compensate. In this year’s field, you don’t have the luxury of playing it safe. No-one’s ever done that in this sport and won a Championship.

It’s a shame we’re seeing Marquez struggle this much. And I don’t care what anyone tells me, his 10-race winning streak was incredible last season, and not the same as Jorge’s now. He was 10 times more entertaining, and had many classics and insane comebacks in that run. Whether you love Marquez or hate him, the sport needs an exciting guy like him at the front, and this situation sucks for everyone. It’s quickly turning into the year from hell for Repsol Honda. 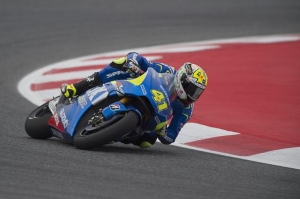 [/fusion_imageframe]Suzuki Steal The Show in a war of Attrition

Okay, so who had a Suzuki Pole-Position, 7 races into the season? I can’t lie, I got very emotional seeing the celebrations in the garage, given how hard Suzuki have worked for the last 2 years to make this return possible, and they’ve done just about everything right so far.

I grew up watching MotoGP in the late 90’s, and seeing Kenny Roberts win the World Title on that beautiful Suzuki in 2000 was what made me fall in love with the sport. To see them back up the top with an incredible lap record by Aleix Espargaro was a thing of beauty, and a testament to not only how brilliant a pair of riders Suzuki have, but also how quickly they’ve made that bike competitive. A truly sensational effort, their first pole position since Assen 2007 and their first 1-2 since 1983.

It was a crying shame when Aleix crashed from 4th in the race, but a superb 6th place from class rookie Maverick Vinales, ahead of the factory running Scott Redding, was a testament that Suzuki are getting better by the race. And with the Honda runners struggling, and Ducati inconsistent, long may it continue. Suzuki should be applauded for doing an exceptional job, it’s another thing the sport needs.

The other shocker, was just how many people hit the deck during this race. Crutchlow was the first – which is quickly becoming a drinking game this season, but he was joined by Pol Espargaro (His humbling by Bradley Smith continues), Andrea Dovizioso (A rare collector’s item), and the heartbreaking Aleix Espargaro fall in the latter stages that gift-wrapped Andrea Iannone a 4th place finish. When Stefan Bradl finishes 8th on that awful production Yamaha, you know you’ve witnessed a war of attrition. Just a shame that was the most exciting part of the race. 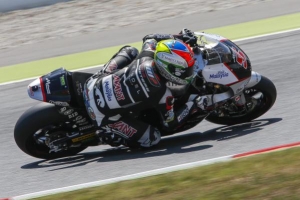 I was told by a friend of mine on Twitch last week that “Johann Zarco is a fraud”. Ha.

Seriously, when do we stop seeing his form as a fluke and realize that we’re seeing a serious title contender here, who’s barely giving his rivals an inch? Because this was the best ride of Zarco’s career and I was incredibly impressed with his performance yesterday.

In a race where Tito Rabat and Alex Rins pushed each other to oblivion levels for all 23 laps, Zarco paced himself brilliantly, inched his way through a tight field, including a surprisingly fast Luis Salom, Sam Lowes, before tailgating the leading pair, before diving down the inside on Rabat into Turn 5 to take the win, forcing mistakes from Rins and Rabat on the last 2 laps to seal it.

Zarco learned from Mugello, where mis-timing his late push cost him a real chance of the victory. This time, he was perfect, and when you can force Tito Rabat into a mistake, you know you’ve got him by the nuts. Exceptional stuff, and with Zarco carrying a 40 point lead through 7 rounds, it’s hard to see where he’s going to drop big points, because he’s been super consistent this season the Kalex he deserved.

Also, he needs to do that backflip more often. Freaking awesome. Great 2nd by Alex Rins as well by the way. The kid recovered well after a strong of 3 bad performances. Sometimes, it’s easy to forget he’s still just 19 years old.

Honestly, it’s been a long time since we had a Moto2 race that captivating. Long may it continue. I hope. 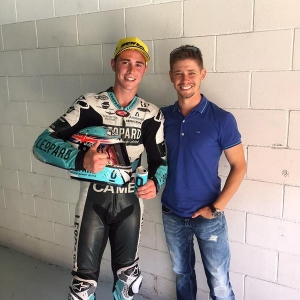 Yet ANOTHER broken record alert here, but what can you say that hasn’t already been said about Danny Kent this season? Yet another superb performance from the 21 year old Brit, as he scored his 4th win of the season in another Moto3 classic.

We got another leading string of bikes, with Miguel Oliviera, Jorge Navarro, Efren Vazquez, Niccolo Antonelli, Danny Kent and Enea Bastianini all fighting for the win, and the nasty effects of massive slipstreaming down the home straight, but with Kent crossing the line for the final lap in 5th, he swung around the outside of Turn 1 with everyone else on the inside line, and passed 3 men at once (!!!), before passing at Turn 4 for the win, holding off a rampant Bastianini in the final sector.

The tactical nouse from Kent has always been one of the strongest parts of his game, such as when he passed 6 men in one lap at Brno last season, and when he left the inside lane open at Jerez when Fabio Quartararo inevitably went for the divebomb and failed, and Kent is showing why he’s a different mustard to the rest of the field as he extends his Championship lead to 51 points.

Two extra things worth noting before I go – Firstly, just how good has 17-year old Enea Bastianini been this season? Scored his first pole in sensational fashion this past weekend, and he finished 2nd in a near victory yet again this round. The first win is coming, and the fact he’s ahead of some really good, and experienced riders tells me “The Beast” is going to go far, very soon.

And finally, what got completely missed by BT Sport’s highly competent Keith Huewen (Ha!), Efren Vazquez produced a carbon copy of Valentino Rossi’s pass on Jorge Lorenzo in 2009, off the final corner, robbing Antonelli of his first Moto3 podium. Absolutely outstanding, and another Moto3 classic.