And so it came to pass, that the finale of the MotoGP Season would be headlined by a Spaniard looking for his fifth World Title, and the greatest ever looking for one last hurrah. But in this case, it was Jorge Lorenzo who led from start to finish, holding off the Honda’s to take the win and the title, with Valentino Rossi going on a charge to finish 4th from the back of the grid.

It was a stunning start from Vale, past 9 bikes by the time he was at Turn 3, very reminiscent of Marquez’s charge from the back 3 years prior. He hit the road block of the faster Satellites early on, and despite Danilo Petrucci being awful in letting him through, he was in 4th by one-third distance. Vale himself said the Top 3 would be impossible, and he was right, Pedrosa 11 seconds down the road by the time he was clear and would now have to hope for both Honda’s beating Lorenzo…

…And it was something that never came. It was a race of tactics, Lorenzo with Swiss-train efficiency at the front, Marquez throwing the house at Lorenzo to try and pass at the end but failing, with Pedrosa in third, saving his front tyre before hard charging at the end. 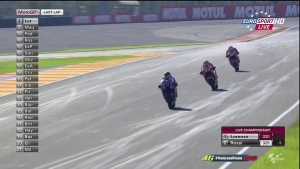 [/fusion_imageframe]What was disappointing about this was that we had a fantastic end to an otherwise decent race, but Marquez was quickly accused of not going hard enough to try and pass Jorge… At Valencia. Where it’s super difficult to overtake. Y’know, the guy who was overly aggressive a round ago. See, this is the only awful part of an otherwise tremendous season, where now people are manipulating Marc Marquez to suit their own agendas. The world’s fastest scapegoat.

Valentino Rossi has embedded such a seed in people’s minds from that Sepang Press Conference, that we take EVERYTHING Marquez does with cynicism. And that’s a shame, because whether people want to admit it or not, he’s the future of the sport. God forbid a guy with 6 DNF’s this season tone it down a notch after a HORRENDOUS week of abuse. See my point here? I’ll take about this more in my upcoming Season Review, but yikes. Awful, and awful to see his fans boo the riders on the podium too. A taint on what was a great race and a great season.

Also, a mention to Nicky Hayden in his 216th and final MotoGP Race. He’s been a tremendous ambassador for the sport, and its biggest American representative since Kenny Roberts Jr, and I wish him all the best in World Superbikes in 2016. Him and Mickey van der Mark should be FUN. 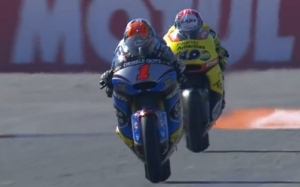 [/fusion_imageframe]As for Moto2, a brilliant return to form for Tito Rabat, a Grand Slam victory in his first race back after his broken arm, and what a fantastic way to bow out as Moto2 Champion, in a performance he dominated from start to finish.

Alex Rins put in a valiant effort in 2nd place, equally Rabat stride for stride but just not close enough to try a pass for the win. A shame that Thomas Luthi was not able to keep it close for third, but another shoutout is due to Lorenzo Baldassari for 4th place, a tremendous result to close what’s been a difficult season for Forward, his consecutive Top 5 finish.

Johann Zarco just wasn’t there on the day in 7th place, but with that result, he surpasses Rabat’s Intermediate class scoring record, with 352 points. Not his day today, but a nice cherry on top of what’s been a dominant Moto2 Season. Still, in any case, nice to see Rabat bow out of the class with… exactly that. And after his incident on the opening lap, I hope Hafizh Syahrin is okay, looked like he took a nasty concussion. 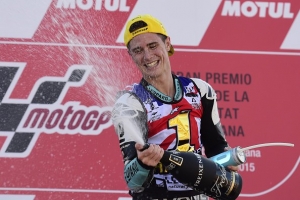 [/fusion_imageframe]And congratulations to Danny Kent, Britain’s first World Champion in 38 years, as he took a pretty comfortable finish to take the title over Miguel Oliveira who once again used his brilliant racecraft to take his 6th win of the season. Kent’s gameplan was to stay on the back of the leaders, and as much as I joked about his paranoia mid-race, constantly looking back, it may have turned out for the best, given the crazy crash at the final corner from Niccolo Antonelli, collecting Romano Fenati and Efren Vazquez right at the death. Hindsight is 20/20, but when you have a 24 point lead with 25 on the table, you can do things like that.

Props to Miguel Oliveira though. He’s been fantastic in the 2nd half of the season, almost matching Kent’s 1st half stride for stride. Very much looking forward to seeing how it all turns out in Moto2 as teammates next season. Should be fun.

And just before I go, I’d like to say thank you to everyone who’s been reading these reviews all season long, it’s been a tremendous season, one with some true classics in there. They’ll be a Season Review and some upcoming stuff down the road, but again, it’s been a pleasure, so thanks for taking the time out to care about my opinion. It means a lot. Dre x