An Open Letter to Valentino Rossi

First of all, commiserations on not winning the MotoGP Championship. There is no doubt in my mind, and in the eyes of many, that you were incredible and inspiring this season. Most riders are done past 30, you led the Championship for nearly every round, at 36. I didn’t think this was possible, especially after you and Jeremy Burgess split up. That ride at Valencia this weekend was one of your finest, and it would have been more than worthy of a World Champion.

I have to be honest though – I’ve never rooted for you as a fan, and after your actions in the last fortnight, I probably never will.

I know the title fight with Jorge was a tense one, one where form seemed to go back and forth between you and him. I’ve been watching this sport for 15 years and I know how you operate, and to be honest, I was surprised at how cordial you were, despite Jorge running his mouth a fair bit… then Phillip Island happened. 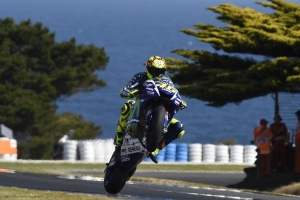 [/fusion_imageframe]I don’t know what was going through your head after that race, but you changed. Was it Aragon? Were the rumours true that you questioned Dani Pedrosa over why he raced you so hard? Do you genuinely believe that if you’re a title contender, you have a divine right not to fight with someone who is involved at that level? Because if that’s the case, that’s disappointing and a disrespectful mentality to have. If you honestly expect a race to take place and guys are going to move over for you, then that’s asinine. These riders have jobs, sponsors, and teams to work for, they aren’t compromising themselves for your benefit.

And in any case, if you’re so sure on that mentality, why were you so aggressive with Jorge Lorenzo at Motegi, when you were out of the title fight in 2010, even making contact with him twice? You broke your own unwritten rule to make a point?

As I said, something changed within you at Phillip Island. Did you feel like now was the time to pull the trigger and play the mind games with people, like you’ve done with rivals in the past? Max Biaggi? Sete Gibernau? Jorge Lorenzo? Because what you were saying made no sense. You defended Andrea Iannone for running his race, then called our your own fans who were giving him abuse… Right before you laid into Marc Marquez for intentionally playing with you all in the race.

Marquez said he tried to cool his front tyre off in the middle section of the race, as it was overheating. Do you know how these Honda’s have struggled this season? You haven’t ridden one in over a decade. I’m going to assume you watched the Valencia race. Did you see Dani Pedrosa’s race? He too, backed off in the middle portion to cool his front, then came back storming towards the end. That alone, validates what MM was saying. Check the lap times like you dug out at Sepang if you’re still unsure. 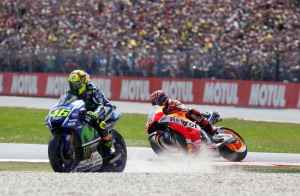 [/fusion_imageframe]I write about you on this website, and I accused you of gunning for Marquez because you knew it would hurt. Jorge’s mentally untouchable nowadays. Marquez IDOLIZED you. No question. He wouldn’t be racing today if he wasn’t. You questioned that… to try and upset the apple cart. To see what effect it would have. Unless you believe that with every fiber of your being, there was no other valid reason I could think up. You had a great relationship with Marquez, or so it seemed. It was awesome to watch on camera too. Hard racing, but fair, and with maximum respect. Was this your old school mentality that suddenly changed your perception on him? Or was it just the mind games that were so sure was going to work again, that backfired when Marquez actually gave it back?

Did you think it was revenge for Assen and Argentina? Because Marquez doesn’t discriminate when it comes to hard battling, surely you’ve seen, he’s like that with everyone. He’s not got a grudge, he’s just a rider who wants to win, like yourself, and like everyone else. Sometimes, it’s okay to take something on face value.

Why would Marc help Jorge, if not for a paper thin reason that you can never prove, and would never hold up in a court? Accusing Marquez of being a “bodyguard” makes you look stupid more than anything else. As Marc retorted, if he was protecting Jorge, why was he running so close? Sure, it looks a little different than the usual Marquez, but again, check the lap times…

…that was Marquez at his maximum. He wasn’t holding back. He just couldn’t find a way around. Sure, it’s easy to pass people at Valencia when you’re on a bike that’s a second a lap faster than anything else, but saying otherwise is disrespectful to Marquez AND Lorenzo, who pulled off a brilliant ride under incredible pressure to win. Not everything is out to get you Valentino. You sound like one of those American gun nuts who blame videogames for people going out on shooting sprees. The government isn’t going to start an uprising, and Marc Marquez isn’t out to hurt you… He’s out to beat you, and everything else.

And the worst part about this is, your influence is so strong, your power over your fans so great, that I don’t think you even realize it. You’re the most popular man in Motorsport, no less. Motorsport’s Muhammed Ali. Your fans have had to keep quiet for a little whole given you were uncompetitive for a long time, but now you’re back, they’re even more vitriolic than you were in your comments.

Marc got death threats on the Internet. He had his home and family ransacked by Italian press, desperate for a story, because of your words. You’ve now alienated him so badly, no-one’s taking his word seriously anymore, every action on track and off, now heavily scrutinized and questioned, something I adamantly believe, would never have happened, if it wasn’t for your rant at Sepang. 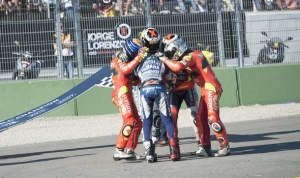 [/fusion_imageframe]BT Sport had one of the most biased commentary calls of a race I’ve ever seen. Talking over Jorge’s deserved celebrations to talk about how “unlucky” you were, despite you costing yourself a massive chance at the title, over you something as needless and petty as trying to run Marquez off the track, something even you admitted, you regretted. It was so disrespectful to Jorge and his achievement, and of course, the fans spoke about your words, more than they did about the race and his title, the limelight he won and earned.

Whether you want to accept responsibility for your position as the biggest star in Motorsport, is down to you ultimately, but I’ll tell you this, it’s done more damage than I think you’ve realized. Lorenzo, Pedrosa and Marquez booed for no good reason, Dorna having to cover their tracks with needless rider meetings and cancelling press conferences, Danilo Petrucci getting attacked for letting you through, embarrassing Dorna further by bailing on the awards ceremony, even though you were runner-up.

That same award ceremony, where Jorge Lorenzo carried the sport with dignity and class, standing with his crew and thanking them on stage personally for the help that won him, his 5th World Title. That could have been you. It should have been, in victory, or in defeat. MotoGP has just had one of it’s greatest ever seasons… But we’re all talking about your words. You’re the greatest talent this sport’s ever had, there’s no reason for you to put a gun to it’s head, just because things didn’t go your way.

Sure, this is your sport. You made it that way with your actions on and off the track. Remember those amazing celebrations and that charming charisma that made this sport what it is today? It’s been replaced by someone who’s coming across like a bitter old man, refusing to take responsibility for his actions, and looking for someone else to blame. I mean, who calls their own boss to their Motorhome? You’re better than that and the sport deserves better than that.

You’re 37 next season. You’ve been awesome for the last two, inspiring, captivating, back to your best. End your career on a high note, before it’s too late, and this sport’s good name gets further dragged through the mud, because if it does, it’ll be through you. MotoGP needs its Doctor back.