It’s about damn time, #93! Welcome back to the MotoGP Race Review series, and for Round 9 of the Championship, MotoGP headed to the Sachsenring in Germany, as Marc Marquez continued his reign of German dominance and efficiency as he took his sixth consecutive German GP win, with Dani Pedrosa returning to prominence as he finished 2nd, his best result of the season behind the Yamaha’s. In the lower classes, it was Xavier Simeon who made history with his first career win, as Frankie Morbidelli angered the racing Gods as he collapsed… right on top of Tito Rabat’s broken collarbone. Also, Danny Kent would romp off the victory in a Leopard 1-2, as the Italians behind went to war. All that and more, in a very interesting MotoGP weekend in Germany! To the bratwurst! 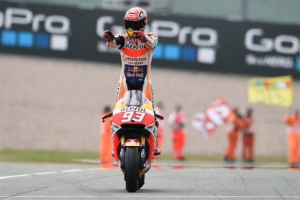 Just a reminder, Marc Marquez is really good at this whole, bike riding thing. He hasn’t lost a race in Germany since 2009, and once again, he was unbeatable on this one, taking control of the race off of Lorenzo, who couldn’t get the grip in the tyres for more than a few laps, and was untouched afterwards. Would you believe this has been the longest streak of races since a Marquez MotoGP win, with 7?

Don’t get me wrong, I’m not hailing him back for real, Germany has always been a track built for the Honda’s and they’ve been practically unbeatable round there, the last time a Yamaha won around there was 2009, and Jorge Lorenzo has NEVER won a race in the country, so you could bet the house on MM93 taking this one. A great result by Dani Pedrosa in 2nd as well, a nice bit of vindication after his arm pump struggles.

As I said, let’s pump the brakes before we start hailing Marquez back, he himself said the track masks the ongoing issues with the 2015 Honda, but it’s a big deal that Marquez was able to admit that he was enjoying himself again, and that he’s been competitive the last two rounds. With a Misano test and Indianapolis on the cards in three weeks time, we’ll know soon if the true Marquez is back. Don’t ever forget, there’s nothing more dangerous in MotoGP, than a rider who knows he has nothing to lose, and with MM 65 points back from Valentino’s championship lead, I think he qualifies in that discussion.

Valentino Rossi extended his Championship lead to 13 points as well after he beat Jorge Lorenzo to a podium spot. You can tell this is a tense title situation right now between the Yamaha’s, and with neither teammate able to land a killer blow, I have a feeling this is going to last a good while yet. All of a sudden, Marquez could play a key role as to where this title ends up going. 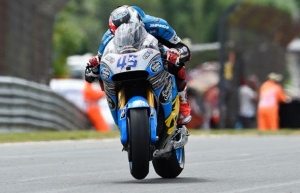 It’s hard not to feel a little bad for Scott Redding this season. I’ve always thought he’s suffered as a knock-on effect of Honda’s issues, but he’s having a seriously difficult time at the moment. He’s struggled all season long, to the point where he even fancies a Pramac Ducati over his current Factory Honda bike. That says a lot.

He says he felt a lot better about the bike this weekend, and looked very fast in practise, only to lose out in Q1 and qualify 14th, before falling in the race on the opening lap. When you twin this with Marc VDS publicly expressing their disappointment over their results so far this season, with Tito Rabat in their back pocket, and a clause in his contract that can cut him loose at the end of the season if he fails to make the Top 7 in the Championship, we might have a new contender for the “Bradley Smith Mid-2014” hotseat award. And that would be a shame for the very talented 22-year old. 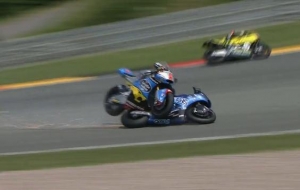 We had a first time winner last year in Dommy Aegerter, and we got another one here. I call this win a good bit of karma for Xavier Simeon, who I still remember was challenging for the win at COTA before getting his handlebar tangled with Johann Zarco, so I guess it was only fitting he steal the win from under Zarco’s grasp off the final corner, ala Sete Gibernau on Vale from 2005. A moment of history for the young Belgian, the first of his countryman to win a race since 1983.

Further back, we had come carnage as a heroic performance from Tito Rabat was shattered by a rather reckless Franco Morbidelli, a surprisingly high result given his form this season, and the fact he was racing for the win for a large chunk of the race, losing out on the last turn, dropping himself and collecting Tito, who of course, landed on the broken collarbone he suffered last week. When it rains, it pours for the reigning champ. I mean, how unlucky do you have to be? Just like that, a unreal performance was snatched from right underneath him, and it makes it the second time he’s been collected by someone else this season. And now he has to have ANOTHER surgery to fix the plate he had put in. Ouch.

That crash now puts Rabat 65 points behind Championship leader Zarco, who all of a sudden, is probably feeling a heck of a lot better about losing another shootout in Germany. If you know what race I’m referring too, give yourself a pat on the back. 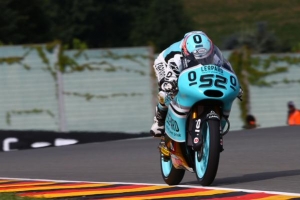 Stop me if I’ve written this before, but Danny Kent is unreal. Yet another dominating victory for the British ace, who’s looking practically unbeatable on tracks that don’t rely on heavy slipstreaming. If he gets a rhythm going, he’s now practically invincible. His 5th win of the season extended his Championship lead over Enea Bastianini to 66 points, and through nine rounds, he’s won 5 rounds, and only been off the podium once, and that was finishing 4th at Le Mans from 31st on the grid. He’s set to smash Alvaro Bautista’s all-time third class record of 336 points from back in 2006, and it he’d totally deserve it too.

A great performance from his teammate Efren Vazquez in 2nd who break the big pack to take a comfortable Leopard 1-2 finish, with the trio of mad italians, Enea Bastianini, Romano Fenati and Niccolo Antonelli in a big scrap for 3rd, with “The Beast” coming out on top, his 6th podium of the season. But let’s be real here, it’s Danny Kent’s title. In the words of Larry Bird: “So which one of y’all is finishing 2nd?”