“No, seriously, Codemasters, you have to do better than this.”

Hey folks, Dre here, and this is the one you’ve been waiting for, as I review F1 2015 on the Xbox One, also available on Playstation 4 and PC. This has been the much anticipated first foray from Codemasters into the next generation consoles, after choosing not to do it with GRID Autosport. So, how does the sixth Codemasters F1 game stack up on Xbox One? Well, it’s amazing at its core, but has some serious, almost game breaking technical problems.

Obviously, the most clear thing to address first is the look and presentation of the game on next-gen, and the game performs very well in this regard. The graphics aren’t magnificent, but decent, and I’m very glad the game plays at 900p60 on Xbox One and 1080p60 on PS4. It makes a huge difference and makes the racing experience all the more smooth and enjoyable. Less racing games than you think, play at 60fps, so I’m very glad that F1 2015 has this from the start. There’s a small amount of frame drops in stormy weather, and the replays only play at 30, which is a shame, but on the whole, the game performs well. Special praise has to be given to the gameplay when the weather is “Stormy”, it’s awesome. 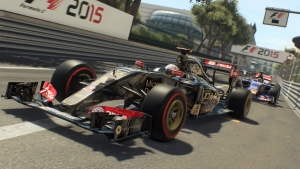 [/fusion_imageframe]The game is also better presented than in previous years, a step that Codemasters have gone backwards on over the years. The game has many more in-depth cutscenes before races, replicating that pre-race feel, with real life F1 commentators David Croft and Anthony Davidson on the mic. Also, I love how you’re on the grid, in the car before a race as you finalize your race strategy. A nice touch. A shame though that some of the lines are repetitive, there’s numerous grammatical and spelling errors in the subtitles, and Davidson’s lines sound really scripted. And for all this, we’re still behind F1 2010 in terms of presentation. FROM FIVE YEARS AGO.

So, how does the general gameplay hold up? Well, for the most part, it’s excellent. As said, the 60fps gameplay is a real compliment, and the game’s handling model has been re-done from the ground up, and it feels pretty good on the whole. The cars have a more authentic brake-by-wire system like in real F1, and while it takes some getting used too, the cars feel great, enjoyable to drive, and satisfying, even over longer distance races. A minor annoyance, is how the lack of feel once tyres are more worn, but it’s only a minor criticism. I’ve greatly enjoyed playing the game, and the game rewards you in time by making you a more consistent driver as time goes by.

Also, the AI are much improved. In previous F1 games, the AI was ultra-conservative, backing out of any passing attempt, and that gave off a very unappealing product to race from a single player standpoint as the AI were very easy to manipulate. Not in F1 2015, though. They are more aggressive, but never to the point where it hurts your experience, they are now capable of racing wheel to wheel and are more committed to passing than ever before. I know many hardcore online players that are genuinely more into the single player experience than ever before, and that’s a great endorsement for the game’s much improved AI.

[/fusion_imageframe]However, there are still notable glitches within the AI themselves. They are painfully slow in Qualifying, making qualifying on pole ridiculously easy. Sometimes they’ll enter the pits on the final lap for no apparent reason, and I’ve seen many a case where a team will pit both its drivers on the same lap, which is completely silly and would never happen in a real F1 race as the second guy would get screwed. Also, sometimes the game will freeze you in 2nd gear on pit release, and that’s annoying. And even more ridiculous, the Safety Car has been removed, a fundamental part of the game and sport, and that’s very disappointing given the game does have more collisions, AI mistakes and random failures. Simple matters that could very easily be patched, and the lack of a Safety Car is unforgivable.

What’s also noticeable, is the sheer differences in difficulty. Legend AI will give any player a stiff challenge if they’re not using the Top 3 cars, but why with the 6 different difficulties, does there have to be 1.5-2 seconds a lap between them? The gaps are too big, and it’s easy for good players in-between like me, to either play a game that’s too easy on Expert, but too challenging to enjoy the experience on Legend. A more sliding scale like Project Cars, wouldn’t have gone amiss.

Another problem with this game is its sheer lack of content. F1 2014 last year was criticized for being a very “bare bones” F1 experience. This year’s game, somehow, has even less to its name. Most notably, Co-Op Championship play, and the promising Scenario Mode, has also been scrapped, as well as the “Career Mode” as we know it. Replacing Career, is the new “Championship Season” mode, where you represent a driver in the 2015 or 2014 World Championship, and then play as them over a season. 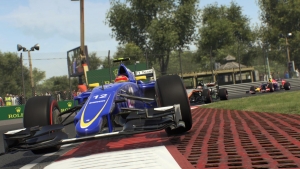 [/fusion_imageframe]Now, I’m not massively upset that Career Mode got removed, it had slowly gotten worse and worse as time and the games had gone on, but this is not really an adequate replacement. It offers very little as a mode, compared to just doing the entire 19 race calendar in “Quick Race” mode. Also, the way the mode is structured is restrictive and flawed. If I want a full, 3-stage qualifying, I HAVE to do 100% races? If I want One-Shot qualifying, races have to be 25%? That’s ridiculous, and there’s zero reason at all for the game to be so restrictive over its options, which is probably the best way of describing the mode.

You can also take this one step further with the new “Pro Season” mode, a hardcore version of said Championship Season, that forces you to play with No Assists, every session replicated like a real F1 race weekend, 100% distances, the HUD switched off, and you being locked into the cockpit cam. If you’re the hardest of the hardcore, or a true masochist, you could get something out of this, but you could do 90% of that in “Championship” Season anyway, so I hardly call this a “new mode”, and the majority of players won’t even bother touching this mode.

Which brings me to Multiplayer, which at the time of writing, is completely broken. Codemasters claimed a completely new netcode was written for this game, yet somehow they managed to find a way to make it worse than last year. The Matchmaking takes forever to set up lobbies, we STILL can’t fill a full grid of 20 cars like actual F1, and for some reason, they split matchmaking for races into five playlists, for seemingly no good reason at all.

On top of that, the game has large amounts of lag, and “Phantom” cars being replaced by AI when the game’s netcode de-syncs, and there are so many glitches, YouTubers have made montages highlighting them all. No game in 2015, should have a Multiplayer this bad on release. Period. It’s practically unplayable, and it’s a dying shame for the hardcore league racers out there, that have to reply on Multiplayer to carry the weight of the game’s longevity, as there really isn’t much to the single player experience to keep you busy. 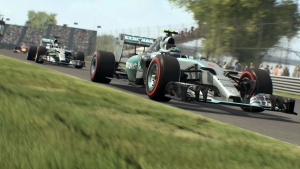 [/fusion_imageframe]And all this, wraps up why this is the worst F1 game Codemasters have made since the terrible 2009 Wii game. And it’s such a shame. Why? Because the core gameplay of the game, is excellent. That on its own, would be a 8-9/10. It’s literally everything else that’s the problem. From the numerous online and offline glitches, to the completely broken multiplayer, this game is clearly unfinished and untested, which is mind-boggling considering just how important a game this is for Codies and the future of the series. This game was meant to be the step forward and the burst of energy this stagnant franchise needed. But this is just not good enough.

And yes, I’m well aware that many of these issues could be addressed in future patches, but that’s just the point, if they were so easily fixable, why was the game released in the state that its in? Easy, to satisfy all those Steelbook pre-orders of course. Codemasters thought that the product we’re playing right now is satisfactory. If that’s the case, that’s an insult to my intelligence.

I’d rather have the game be [/fusion_builder_column][fusion_builder_column type=”1_1″ background_position=”left top” background_color=”” border_size=”” border_color=”” border_style=”solid” spacing=”yes” background_image=”” background_repeat=”no-repeat” padding=”” margin_top=”0px” margin_bottom=”0px” class=”” id=”” animation_type=”” animation_speed=”0.3″ animation_direction=”left” hide_on_mobile=”no” center_content=”no” min_height=”none”][fusion_tooltip title=”Again, because it had already happened once, the game was meant to be out on June 12th, remember?” placement=”top” trigger=”hover” class=”” id=””]delayed[/fusion_tooltip], and it released with due care and attention, than be sold a substandard product on the promise it’ll get the treatment to take care of it, which is what should have been on disc, in the first place. The bad PR is not worth it, just see Arkham Knight on PC, or the releases of Project Cars and Driveclub on next-gen, to see how bad first impressions can kill a game, despite Driveclub being much more playable now, than when it was released a year ago.

Developers should not be allowed to release unfinished games on console. End of discussion. Even if the bugs got fixed, the casual player is going to go get bored quickly. Now, as much as the F1 games are limiting, and the core gameplay is excellent, as a complete video game, that makes it a much harder sell. F1 2015 is a game with so much promise and potential, a recipe for the perfect Shepard’s pie for an F1 game with its solid visuals, improved presentation and excellent gameplay. And then they had to go and fill it with dogmeat. Potential, doesn’t mean anything, unless it delivers, and it’s the technical production of this game, that is F1 2015’s biggest success, and crippling failure.