The Dirty Air-lephant In The Room

In the aftermath of the Australian Grand Prix, Dre comments on the discussions F1 has faced, in a race that seemed to double down on the sports current problems.

We’re a week past the Australian Grand Prix… I’d make an analogy about the dust settling here but it hardly moved after the race itself to begin with.

It was a race that did little to soothe many race fans fears. It already seems like 2018 will be more of the same. Ludicrously fast cars, lap records being smashed. However, this will translate into poor racing with results that almost come across like a robbery because cars literally can’t overtake on more technical circuits. Alonso was talking about a hunt for Red Bull, when Daniel Ricciardo was chasing Kimi himself in dirty air, but was still 20 seconds ahead of him, with Verstappen stranded behind.

According to some of the more knowledgeable tech guys, your car needed to be nearly two seconds a lap faster to make passes. That’s inconceivable. I know the Tilke-based circuits will make this a lot easier, it’s becoming more and more obvious that these regulations are becoming the dirty, enormous, elephant in the room:

Formula 1 is fundamentally broken at the moment and there is no quick fix.

In the nine days since that race, every suggestion on earth has been thrown out to try and make it better. There have been psychological arguments, like simply moving Australia off the opening slot like 2005 again.

I saw the F1 subreddit suggest multiple track alternations, like extending the straight before Turn 13 and using the roads for a hairpin. We recorded M101 episode #130 last night and King saw suggestions of extending the straight before 11 and turning it into a slower, 90 degree left. That high-speed chicane for me is the best part of the track, and probably shouldn’t be messed with.

Yesterday, we led episode 130 with the news AMS broke last night about the possibility of a qualifying race that bosses had suggested. This was doubled down by F1’s Will Buxton, which I was just like… No. Knockout qualifying has been one of the best creations the series has had in YEARS. It’s exciting, it makes you care more about smaller teams, its tense, thrilling, and all those buzzwords you get on movie posters. For me, it’s the best part of the weekend.

This in a sport where Lewis Hamilton has had 42 pole positions since the hybrid era began. Proof that the destination often doesn’t matter if the journey is still captivating. The illusion of excitement by gifting Sauber a free win at Monaco every year with “reverse championship” qualifying races isn’t my idea of fun.

As said, I know a lot of this is post-opener panic stations, but I can’t stand the fact that a lot of the above suggestions are dancing around the real problem. Most F1 fans know it, but just don’t want to admit it. The series screwed up the 2017 regulations and are now trying to save face knowing they can’t do anything major until 2021. The teams are not your friend. If the teams themselves were really about “the show”, why agree to add even more downforce and exaggerate the problems these cars have running to the point where anything within a second and a half was described as a “force field” by Ross Brawn? Taking a corner at 150 instead of 130 really isn’t the game breaker you think it is. 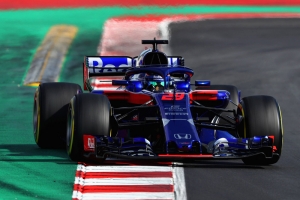 There’s a knock-on effect that comes with that. Besides the earlier suggestions, it results in cars backing off to protect themselves. Only having three power units for a 21 race season is going to squeeze teams to be even more conservative.

As I’ve written about before, this sport takes enough of a beating over [fusion_tooltip title=”One of the sport’s biggest media-enhanced myths…” class=”” id=”” placement=”top” trigger=”hover”]car management[/fusion_tooltip]. So to see Hamilton back right off at the end of the race, as well as team radio messages on TV constantly referring to “saving” elements of the car, it puts people off. I know, a lot of it is crappy F1 narratives, but it doesn’t help.

Comparing Motorsport series is something I can’t stand, mostly became their hardcore fans use them as dick-measuring contests, but I’m left with little choice when team bosses in F1 are scared of the series becoming IndyCar in terms of more spec parts. Their season opener was in St. Petersberg, another track that isn’t conducive to overtake, yet cars could run close, we saw that overtaking was [fusion_tooltip title=” (The over 300 count was silly given their counting methods, but still)” class=”” id=”” placement=”top” trigger=”hover”]more than feasible[/fusion_tooltip], and ultimately, it produced a better race.

The teams, especially at the top, are scared of this. They don’t want to risk the monopoly that F1 has become at the front. Why would they? Why should they? F1’s always been a sport of dominance, and anything that puts that at risk, the bigger teams will always oppose it. From potential aero changes to funding lesser teams to reducing customer parts, independent teams can buy off the shelf.

I don’t want to stray too far off the path here, but you’ve got a better chance of Rihanna being my future ex-wife than the teams agreeing on solutions to this problem. Trust me, I’m doing you all a favour by not talking about the other problems that are having negative impacts on the sport; like distribution of wealth. Or Pirelli’s tug of war between the teams and the sport itself. The worst competitive balance F1 has seen the early 2000’s. The teams’ best independent on the brink of ruin hand-in-hand with rising competition costs year on year.

This is why the unveiling of the first steps towards the 2021 regulation changes next week is so important. If Brawn’s early words are anything to go by, leaning towards IndyCar’s approach of universal aero sounds promising. Less downforce. A greater emphasis on reducing dirty air, simpler, cheaper hybrid units that could bring Renault and Honda back into relevance. Even the possibility of customer cars being back on the table for the first time in 40 years. We could be onto something here.

But man, 2021 feels so far away when the current climate leaves so much to be desired. We’re in this together, Y’all. Time to start gritting your teeth.