After the most controversial MotoGP race since Sepang of 2015, Dre talks about this weekend’s Argentine Grand Prix with Marquez going too far and why there’s more to it than just throwing the book at his actions.

Oh, Marquez. You know it was a mental MotoGP round when Jack Miller starting from pole and finishing 4th would barely crack the Top 5 of crazy to come from Argentina. But here we are, another landmark race from the series that keeps on giving.

Okay, safe to say for Marc Marquez that he lost his head a tad this weekend. It was a weekend that really didn’t go to plan. Argentina is one of his banker tracks, a technical track where his style fits like a glove. Marquez ended up qualifying on the back of the second row due to changeable conditions; and Jack Miller somehow making slicks work like his surname was Pawi.

He then stalls the bike on the grid, gets confused by race direction, pushes the bike back to his grid slot, then starts anyway. He takes the lead comfortably, but gets a ride-through for not following procedure on the grid. Justified. 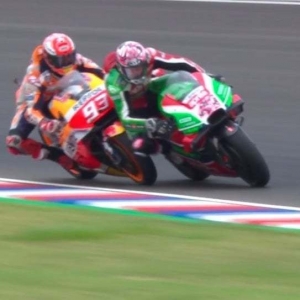 Now, full disclosure, I am a huge Marquez fan. And in flashes, I got reminded why. It’s such a damn shame he was so aggressive, because his pace was ASTONISHING. 1-2 seconds a lap faster than the leading group. It could have been Valentino Rossi at Phillip Island all over again when he had the 10 second penalty to make up. He made a mockery of the field, and that was just the problem… the orange mist had descended. Marquez got desperate and went berserk knowing he had the pace to still get an incredible result, and as a result, made moves he shouldn’t have made.

Parking your side pod on the apex, banging knees, it was too far. Rossi’s incident towards the end was more unfortunate than it was due to both ending up on the damp patch of the final hairpin. But, the damage was done. Marquez was right, the Espargaro bump on a high-speed corner WAS worse. That was incredibly dangerous and he was lucky he was only told to “drop one position” for it. In a vacuum, every penalty he got was fair, even if you want to “black flag” him purely for the symbolism behind it.

As said, Marquez is incredible. The most naturally talented rider I’ve ever seen in MotoGP. Sunday was a reminder of the darker days. Like in Moto2 when he punted Ratthapark Wilairot to oblivion at Phillip Island. He’s always ridden on the edge of acceptable, and there’s a beauty in that, but that weekend, he went too far. He’ll learn from it. If anything with Marc, he’s always learned from his mistakes and come across better for it. I took it as a good sign he immediately tried to apologise. He knew he fucked up.

It reminds me of what legendary MotoGP commentator Toby Moody said one time: “If he just toned it down a couple of notches, he’d be incredible.” He was describing Marco Simoncelli. There’s some parallels to be had there. A little bit more on-track respect would go a long way. The Dovi fights have been amazing and clean. He should focus on that.

I don’t entirely hold Marquez to blame though. Part of the problem is MotoGP itself. This in no way exonerates Marquez for what he did, but this is a sport that has bred and made its name off of borderline questionable riding tactics. 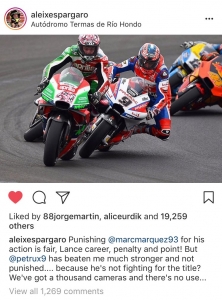 Take Valentino Rossi for instance. Now, I’m not going to read into his post-race comments, they were irrational and hypocritical in my humble opinion. BUT, let’s not forget that for years, one of the most prominent highlights in modern day MotoGP history was his punt off the apex of Sete Gibernau at Jerez. It’s in every montage, every TV package. And lest we forget, Rossi was never disciplined for it. Race Direction for the most part, have almost always let contact on a final lap, or a tight finish go.

I’m not saying that’s a good or a bad thing. That’s the decision they’ve made for the good of the sport. But as a result, you leave a problematic grey area in terms of discipline and “where the line is”.

This weekend was a peak example. Lap 1, Johann Zarco very narrowly chops Dani Pedrosa off the apex. Pedrosa was unlucky to hit the damp patch and take a highside, but that was deemed okay. Aleix Espargaro made the point on Twitter that while he agreed with the Marquez punishment, he mentioned Danilo Petrucci punted him at a low speed corner off the hard camera and no punishment was given.

Aron Canet on that same weekend made a point of punting Makar Yurchenko with no intention of making the corner… and was given no penalty as it was deemed a “racing incident”. I was calling for a DQ from the weekend, it was an atrocious bit of riding with bad intentions. Again, this is not to give Marquez a pass. But when your stewarding and culture of your sport has thrived off these inconsistencies, you’ll probably get more incidents where a rider will cross that line and take a chance in the hope they don’t bite the bullet.

But I also know that I’m screaming at a brick wall here. It’s no coincidence the “#TermasClash” is free on a normally video-walled content pass. That MotoGP are pushing the shit out of this clash for publicity, and why not? The sports two biggest stars of the last 20 years is now a blood feud that’s kept up over the last three seasons. And it WILL spill over. It already has between their fanbases. And I feel bad for Crutchlow, who had a brilliant win, with Zarco, Rins, Miller, Syrahin and Rabat who all had brilliant performances be kicked to the kerb for clicks.

I know it’s an inevitable part of a sport that’s brand is only growing but I loved that 2017 was such a brilliant season, and it felt like a breath of fresh air compared to how toxic 2015’s season ended. I hope that comes back and Argentina gets swept under the carpet, but I doubt that in this sporting environment. The sport LOVES shit like this, for better or worse.

Argentina was a brilliant spectacle. Let’s not forget that. But, it furthers muddies the waters as to how the sport is disciplined. All I ask is this… where’s the line here?

ANNOUNCEMENT: This week’s #BikeLive will be up on Early Access for just 1 buck, this weekend. As soon as it goes up, I’ll have a link for it on our Patreon page, http://www.patreon.com/Motorsport101 – Check it out, I want as many people on this week’s show as possible, give us a chance! – Dre