“Marquez goes for the Trifecta.”

The wait is nearly over. After a punishing 5 month off-season, we’re just days away from the return of the Grand Prix Motorcycle Championship. And boy, there is so much to look forward too for 2015, and I can’t wait for the season to get going in Qatar this weekend! In this season preview, I’ll be talking about the big four, and why it might be a make or break year for one of the four at the top, about the improvements of Ducati, the absolutely loaded midfield in the class, and what some of the new boys can do. And who do I think will be top British rider? All that and more, in Dre’s MotoGP 2015 Season Preview! 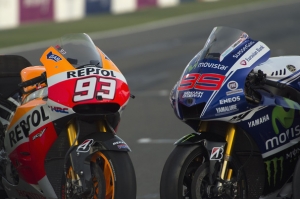 So, let’s start right at the top – Can anyone stop Marc Marquez? Short answer: I’ve seen nothing in testing to suggest otherwise. As long as Honda produce a rock solid, jack-of-all-trades prototype like they’ve done the last 4 years, I don’t see any reason why Marquez’s natural talent (Easily worth a couple of tenths), shouldn’t prevail. Preview over, next!

But in all seriousness, the Yamaha team seem to be in good spirits. Their 2015 M1 has finally got the seamless downshift that they’ve been working towards, and it seems like Jorge Lorenzo has been rejuvenated, after a miserable 2014, mostly spent sharing motivational phrases on his Twitter page. Don’t forget, Jorge is no quitter, and he would have easily been a title contender if it wasn’t for his atrocious start to the season. No-one out-scored him in the last 8 rounds. A motivated Jorge is easily going to be Marquez’s toughest match up.

On the other side of the Yamaha garage, is Valentino Rossi, who’s still right up there at the tender age of 35, coming off a season that blew everyone out of the water after the public split of Burgess and his declaration that his 2014 Yamaha was “the slowest race bike he’s ever ridden on”. Ah. He was 2014 runner-up, and I’m curious to see what form of Rossi we’ll get once the lights go out. If we get the 2014 Valentino, we could be in for some tremendous scraps as ever from the Italian. But I can’t help but shake the nagging feeling of – “Dude, father time is undefeated.” 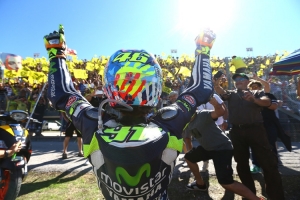 [/fusion_imageframe]Valentino Rossi is the Frank Gore of MotoGP. Just when you think this could be the year the wheels fall off, he keeps finding ways to keep on trucking. But you have to wonder, when will age finally catch up to the legendary 9-time World Champion. And with the field the strongest there’s ever been, can Vale justify the 2-year extension?

Because if 2013 Vale comes back, it could be a lonely year in 4th place. Which Vale will we get? Was 2014 just a blip? Find out on the next exciting episode of MotoGP!

Then there’s Dani Pedrosa. A struggling year last year where he was blasted by his far superior team-mate. A year with just the one win to his name, his lowest tally since entering MotoGP. And that was back in 2006. This is his 10th year with Repsol Honda, and at this point, you have to think, this may be his make or break season. I don’t think anyone truly thinks he’s in Marquez’s league, and that puts him in a really nasty position, with some big names growing behind him, like Scott Redding, and Cal Crutchlow, now on Honda’s themselves. And seriously, if you’ve done 10 years with the Honda factory team, and not win a Championship, there’s a problem.

Honda are seemingly rewarding Dani for his loyalty, and he makes for a seriously awesome #2 who can clean up for Marquez’s issues on occasion, but he’s got to start beating MM93 on track if anyone’s going to take him seriously as a title contender. Suppo’s got to start thinking if he can more production from elsewhere, he does turn 30 in September after all.

But can anyone crack this sacred 4, which hasn’t changed for 2 years? Well… 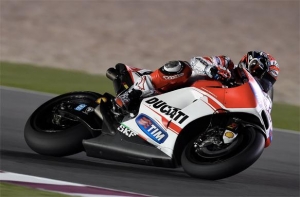 [/fusion_imageframe]The Return of the Red Baron

Welcome back Ducati, it’s good to see you again. If there’s one eyebrow raising thing I’ve taken away from testing, it’s the legitimate speed that the Italian unit has developed in their GP15’s, running very close to Marquez and the factory boys, while on the same rubber. You have to remember, that the Ducati boys are a Factory 2 team, meaning they share the Open Class rules, so, with extra soft rubber available, which could be worth a second a lap, it’s almost nailed on that Ducati are going to be starting Qatar on pole. The raw speed is definitely there, and they have a very talented line-up in Andrea Dovizioso and Andrea Iannone, the latter, having adapted incredibly quickly to the GP15, which doesn’t share a single bolt, compared to last year’s bike.

The questions for me, is whether Ducati’s race pace has gotten better, due to the “Catch 22” nature of running softer rubber in the race, which so heavily hurt Ducati last year. And if they are successful in the short-term, will the return of their concessions hurt them in the long run? It’s going to be very interesting following Ducati’s progress as the season goes on. 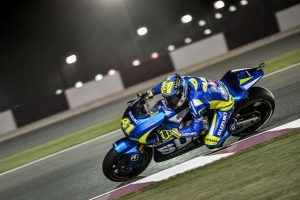 [/fusion_imageframe]…And The Boys In Blue

So how about the X-Factor here, the returning Suzuki factory team? They have an incredible high-potential line up in Aleix Espargaro (Who many say is the Nico Hulkenberg of MotoGP), and Moto2 Hotshot, Maverick Vinales, who was incredible in his one and only year in the class last season, finishing 3rd, best of the non-Marc VDS runners.

Remember, Suzuki are also running as an Open Class runner, so they could surprise some people over a lap early on, even if the bike is reportedly down on power. I’m hesitant to start pushing them to the moon like certain Bike Live co-hosts I have, but it’s going to be again, very interesting to see where they slot in amongst the midfield as an open class runner, as well as seeing the development of Maverick Vinales, and how he stacks up to a blue chip Elite-level rider in Aleix Espargaro, who is one of the most under-appreciated riders in the field, and is still only 25. 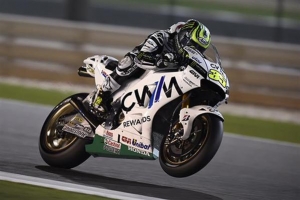 I said last year that the MotoGP 2014 midfield was insane. I was wrong, THIS is insane. Positions 6-15 could be insane this year.

You have Tech 3, with Pol Espargaro, arguable Rookie of the Year from 2014 looking to kick on and maybe steal a podium in Year 2, alongside Bradley Smith, who recovered well from an awful first half of lasts season, but to me, needs to kick on and definitely needs to win the teammate battle, with a clean slate of technical regulations for 2016 planned, and a bunch of potential riders that could be gunning for his seat.

Cal Crutchlow will be looking for a better 2015 campaign, after his year at Ducati could easily be summed up as another notch on their failed bedpost. But he’s on a Factory Honda, arguably the best prototype on the field, and we all know he has superb 1-lap potential, so if he can learn the back, he’s another guy who could steal some heavy points.

Also on a Factory Honda, will be Scott Redding, after his excellent rookie season on an Open Class bike. He’s still experiencing the tough learning curve, but he’s got the excellent Marc VDS/Estrella Gallcia unit behind him, and with all the potential world. I think he could definitely be one to watch later on in the season. On sheer potential, he’s the best British rider in the top class in years. 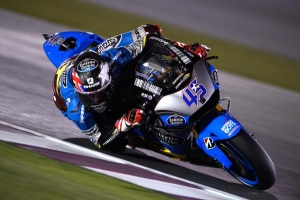 [/fusion_imageframe]A big question mark still lingers over the Forward Yamaha department as Stefan Bradl gets to grips with an Open Class, production Yamaha that Aleix Espargaro did such a brilliant job with, and looking for something to prove after his decline with LCR, alongside World Superbikes’ Loris Baz, who’ll be looking to silence the critics after his ugly spat with Tom Sykes when together at Kawasaki last year. Oh, and every time Keith Huewen or any other of the 17 BT Sport commentators mention his height, take a drink.

Don’t forget the Pramac team too, who are on the concessions, and I’m excited to see what Danilo Petrucci can do on a bike he doesn’t call an “experiment”. One of the more underrated, and under appreciated talents in the field.

As for the other Open classers and Production runners, I think Hector Barbera could be the pick of the bunch, impressing once Avintia Racing switched from a Kawasaki to a Ducati, but keep an eye on Eugene Laverty, a long established top-tier runner in World Superbikes as well.

And if there’s one thing not many have noticed about the nature of the field and the format of the sport, Qualifying could now be brilliant with two intense 15 minute sessions, and the battle to get into Q2 could be between 5 or 6 really good riders. Anyone having a bad time in practise could very well be punished. I wasn’t keen on the format when introduced, but now with a more balanced field with more bikes, it really makes sense.

[/fusion_imageframe]And let’s give Aprilla a moment too? They have a fantastic line-up with Alvaro Bautista and the return of former series runner-up, Marco Melandri, but their adapted Aprilla prototype simply isn’t competitive yet. So, expect them near the back until further notice. Maybe next year, with a full prototype, we can talk.

So, there’s pretty much all the runners and riders, as well as all my pre-season thoughts heading into what could be the most entertaining MotoGP Season of recent times? Got any predictions? Let me know in the comments! Here’s a quick rundown of my predictions, why not fill this in yourself! Thanks for reading!