“One of the truly most shocking wins of our time.”

Ahem. Sorry. So, we’ve just had the Malaysian Grand Prix, and my word, was this a shocker! Out of nowhere, Sebastian Vettel out strategizes and beats the Mercedes at their own game, taking a win over Lewis Hamilton and Nico Rosberg. On top of that, we had Max Verstappen make history in great style, Kimi Raikkonen had an excellent drive, and drama rattled up and down the field, in a surprisingly entertaining race. So let’s break down the best of the 2015, Malaysian Grand Prix. 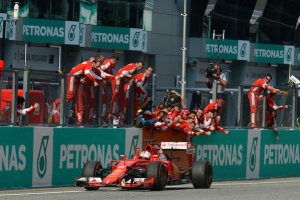 [/fusion_imageframe]
The Return of The King

Well, shit. I truly think there was only one man in the field who truly believed he could win today, and it was Sebastian Vettel himself. He called his shot after qualifying on the front row, and he went on to control the race, beating both Mercedes drivers on the 2-stop strategy, whereas Mercedes couldn’t handle their tyres in the extremely hot temperatures and could only manage 2nd and 3rd. A truly shocking win for Sebastian, his first since the 2013 Brazilian Grand Prix, Ferrari’s first win since Spain 2013, and the 40th of his illustrious career, putting him just one behind the great Ayrton Senna. The emotion shown by Seb upon his first Ferrari win was clear, a landmark moment in the German’s career, and a shot in the arm to the dominant Mercedes outfit.

Further behind, Hamilton could do no more in 2nd, Rosberg struggled post safety-car to clear the field and lost time to finish in 3rd, and a brilliant recovery drive from Kimi Raikkonen to finish in 4th, after suffering a puncture on Lap 2, the safety car recovering the lost ground, and picking off the field. It’s fantastic to see Ferrari have built a car that both of its drivers can do well with, and seeing Kimi in the fights, with a potential 4-way, is a mouth-watering prospect.

So, Williams, wanna raise your game any time soon? (Nice pass around the outside on the final lap by Valterri Bottas, mind.) 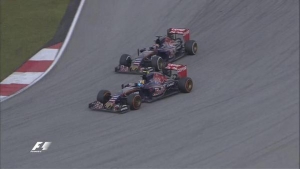 Congratulations to Max Verstappen, now the youngest points scorer in F1 history, and he earned with some great driving. I was very impressed with his racecraft on offer today, making better drivers like Daniel Ricciardo look amateurish out there. The biggest compliment I can give him, is that he didn’t like look like a 17 year old in his 2nd race at all. He looked like he had already done five years. And that’s what makes his performance all the more shocking. This kid is a talent.

And heck, the fastest Renault powered car in that field is awesome too. A frustrating day for Red Bull given the sister team was faster all day long, Daniel Ricciardo with a damaged car limping to 9th place, ahead of his team mate in 10th. At least Christian Horner can’t complain too much about the fact all four of his cars, finished, right? 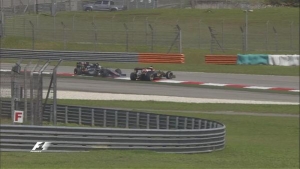 [/fusion_imageframe]
The Back-marker Struggle Is Real

Not such a good day at the office for the Force India team, coming back down to earth after their surprising double points finish in Australia. Both drivers were given 10 second time penalties for moments of silly driving. Hulkenberg for banging into Kyvat at Turn 2, Hulk going into a gap that was never really there, and Sergio Perez for being completely unaware of the imminent Grosjean going around the outside of him in Sector 3 towards the back straight. Not a good day at the office for Mallya and co, and a rare lapse of judgement from the usually ultra-consistent Hulkenberg.

As for McLaren-Honda, a double retirement, first from Alonso and then from Button towards the end, as the Honda piower unit just couldn’t cope with the high temperatures in Sepang. You have to start wondering if Alonso’s thinking he made a terrible mistake. Jenson Button deserves better.

And as much as I’m not a massive fan of their return, a pat on the back to Roberto Merhi for finishing the race for Manor, their first of the season. You gotta start from somewhere, right?

So, with Vettel’s first Ferrari win, a great recovery from Raikkonen, and some great action throughout, Malaysia is a race I’d definitely watch again. And that has nothing to do with the winner, honest!