HOW IN THE NAME IN ALL THAT IS HOLY DID VALENTINO DO THAT?! Ahem. Sorry. Again. Hey folks, Dre here with a look at last night’s double header with the MotoGP season opener in Qatar, and boy were we treated to another weekend of crazy action, including the return of Ducati, a Moto2 race that nobody wanted to win, and yet another Moto3 race, that somehow the pole-sitter actually won! But of course, the headlining story, is that Valentino Rossi doesn’t know when to stop winning. What a day for Italian Motorsport huh? Here’s my full thoughts on MotoGP’s 2015 Grand Prix of Qatar! 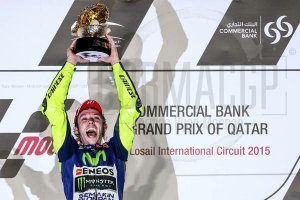 Valentino Rossi taught us all (And hopefully Keith Huewen) a valuable lesson – Don’t ever right off Yamaha, just because they don’t qualify well. Seriously, I thought he would have learnt this from last year. But anyway, from 8th on the grid, it was Rossi and Lorenzo that surged through the field, and we had one of the all-time great MotoGP dogfights between the two Yamaha’s, and to everyone’s surprise, the two Ducati’s of Iannone and Dovizioso.

Rossi struggled to assert himself against Dovi and Lorenzo in 1st and 2nd, and Ducati’s straight-line speed was incredible, 2008-esque, but it was Rossi who came through on the last lap and did enough to hold off Dovi for his 83rd top class victory, and 70th in MotoGP alone. Rossi himself called it “One of the best rides of my career”, and it was hard to doubt him. From 8th. In his 20th season in Motorcycle racing. Celebrating his 36th birthday last month. The man is a riding GOD.

And I don’t care what anyone says, the sport is just better when he’s at the top. He makes you love the sport over, and over again. God bless you Valentino, keep making us smile. And of course he wins what may have been the best race since Estoril 2006. Magnificent. 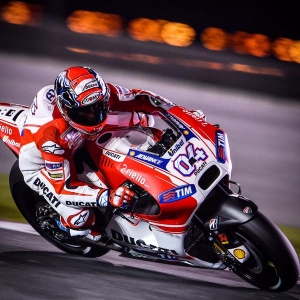 [/fusion_imageframe]Ducati – The Hype Was REAL

Well, who had THAT on the cards? Unreal performance from the Ducati’s, who well and truly look back to their best. The GP15 really looks like a great bike, and that was the best performance I’ve seen from Andrea Dovizoso since he won in Donington all those years ago. Andrea Iannone faded a little bit towards the end, but his first MotoGP podium was well deserved as a reward for all his hard work on the Pramac bike last year, and has potential to win himself.

The hype and the testing speed was real for Ducati all along, and while I’m still sceptical about life post-concession withdrawal, this is what MotoGP needs, a legitimate third contender at the top, and I really hope they can keep this going.

Oh and it’s definitely worth noting that Suzuki deserves some props for getting both bikes in the points in their very first race. Especially when their bikes are down on power to the point where they were giving up 10mph down the straights. 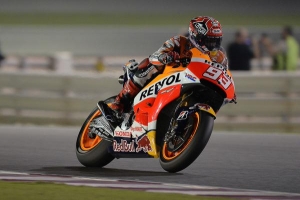 [/fusion_imageframe]So, where were the Hondas?

Arguably, just as big a surprise was Honda’s sinking off the pace. Nothing game-changing, just a rough day at the office. Marc Marquez had a rough start, Lorenzo essentially bumping Marquez out of room and sinking to the back, only to fight his way back to 5th (A very good recovery no-one wants to talk about), and Pedrosa just looking out of place out there, which I’ll get too later, because now we know why.

Honda’s pace was just as good as the Front 4, Marquez had just lost too much time at the start to catch up with the leading pack of four. And don’t forget, Round 2 is in Texas. Who do you think’s going to bounce back then? Great damage limitation from Marquez. Champions need that sometimes. And heck,Marquez also set a new Qatar speed record – 217 mph, 350 clicks. Insane. 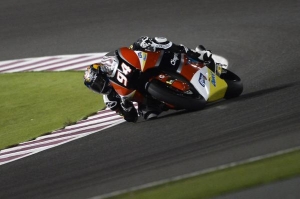 Well, you could have had 50/1 odds on Jonas Folger winning the first round of Moto2 this season. Somewhere, some lucky motherf***er got rich. This was a race where it looked so much like it was going to be a battle between Johann Zarco and Sam Lowes, who had shocked everyone for getting the maximum out of that Speed Up chassis.

But Sam Lowes hit the deck on Lap 3 after still believing he rides a World Supersport bike, and me to roll my eyes again. Every time Sam Lowes shows some speed, he hits the deck. Bugger. Zarco had it in the bag, but a gearbox issue meant he was stuck in a gear, and as a result, nearly smashed into the home-straight wall. Trust me, the on-board footage was terrifying.

So Folger got his very first Moto2 win, with Xavier Simeon matching his best ever Moto2 result in 2nd, with Thomas Luthi 3rd in his first Kalex chassis race, with the big surprise being Alex Rins finishing 4th! Just a length behind Luthi, and an excellent effort. He was barged out to 20th on the opening lap, and came back to finish 4th, a brilliant rookie performance by the young Spainard, and for me, the ride of the weekend.

Moto3 proved what we were all thinking – There is no top guy in the class. My goodness, another front pack of 10 guys challenging for the win in the Qatar desert, as to everyone’s surprise the pole-sitter actually won, and it was a brilliant, shrwed ride by the veteran Alexis Masbou as he would go on to take his 2nd Moto3 victory at the tender age of 27. What many failed to spot, was that Masbou started the final lap in 7th place. Clever boy.

To everyone’s surprise, Enea Bastianini came in 2nd, from 21st on the grid, another fantastic performance from the young Italian, even if dropped the trophy at the podium. Danny Kent ended up third, slightly gutted he didn’t get the win. Nice to John “The Wee” McPhee in 5th as well.

And if the form book’s anything to go buy, we’re going to get some great racing and young performance coming through. Two of the other surprises was the former Sky VR46 man Francisco Bagnaia punching well above his weight on the Mahindra, and rookie Fabio Quartararo being excellent despite his last lap mistake, finishing 7th. The kid already has excellent race-craft, a disturbing amount for a 15 year old. Kid is special.

And a shame Miguel Oliviera got bumped out at Turn 1, I’d have loved to see where he fitted in, as its kinda clear he’s top KTM at the moment on raw speed. But in any case, this was another brilliant advert for why Moto3 is as exciting as any sport in the world 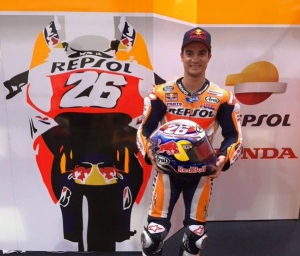 [/fusion_imageframe]Now, many have already asked me to talk about the Dani Pedrosa news. For those not already in the know, he’s having to step down from Honda indefinitely due to an arm pump problem, and that because its inoperable, he needs to take time out to see if he can find another solution, calling it “the lowest point of my career” in an official statement released last night.

Personally, I’m gutted for Dani. The man is such a great rider, the best to have never won a top flight championship, who’s already battled through so many injuries in his GP career, and now has to step back for the good of his career, and I just hope he can find a way back eventually, because this would be just a sad way for his career to end, especially when you realize he rode THE ENTIRE 2014 SEASON like this, hoping it would get better over the winter, which it didn’t.

Another question is whether Honda are going to run a replacement. There’s already talk about Cal Crutchlow or a return for Casey Stoner… I’d like to think test rider Hiroshi Aoyama is pretty the safe bet, but who knows what Livio Suppo is thinking.

In any case, get well soon Dani. We need you back here.

PS – Fun Fact: There was no Spaniard on any of the podiums in MotoGP this weekend. No Pole Positions or Fastest Laps either. WHEN WAS THE LAST TIME THAT HAPPENED?!