“Reminder: Dani Pedrosa is still really good at this shit.”

And in Part Two of my MotoGP related double header – It’s time for me to talk some MotoGP, as Round 15 of their Championship had the teams in Motegi, and under a very different contrast to last season. Last time, Marc Marquez was celebrating his second consecutive Championship. This year, he was ruled out of mathematical contention, as it was his teammate who stole the show again, as Pedrosa would take an incredible victory over the Yamaha’s, with Jorge Lorenzo butchering his tyres being the main vocal point.

Also, we had Johann Zarco cement his Moto2 World Championship, before he even raced in Motegi, enroute to his 7th win of the season, and we also had Niccolo Antonelli continue his great run of form, with his 2nd career win, as I snap at something that’s gotten my goat for a while now. All that and more in my MotoGP Motegi review…

A Reminder Of Brilliance and Handbags 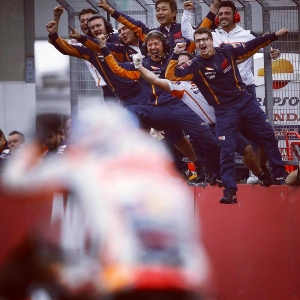 [/fusion_imageframe]So, how often does a rider in MotoGP drop 10 seconds off the lead, then win by 8? Because that’s what Dani Pedrosa just managed. For his 50th Career Win, Pedrosa showed a masterclass of wet weather riding, which is incredible when you consider, it might have been the weakest part of his game a few years back.

The first half played out as expected – Jorge Lorenzo breaking off a big early lead, with Rossi lagging behind, but as Pedrosa fell back, he picked off Dovi and then started marching towards Rossi at a rate of knots, passing Rossi, then taking Rossi with him as he attacked and passed Lorenzo for when ended up being a rather straight-forward win.

It turns out, Jorge Lorenzo had completely butchered his wet weather tyres, and he lost bucket loads of time towards the end of the race, first to Pedrosa, and then bottled it as he made a mistake running wide at Turn 2, letting Rossi through to pass for 2nd.

It had not been Jorge’s weekend, a weekend where he first complained about Yamaha’s data sharing, and the accusation that it was helping out Rossi more than him. For me, it means absolutely zero. Jorge said that he’d been doing things his own way since 125’s… This all comes down to whether you want to take Jorge’s word for it, but it goes to show you the man is still pretty salty about his core, especially when he said after the race that “bad luck” is the reason he’s not leading the Championship.

I’ve warmed to Jorge Lorenzo over this season, but Vale was right in his response this morning, that it’s rather disrespectful in the face of the man who’s lead the Championship through 14 out of the 15 races this season. Jorge needs to learn, that there’s more to a Championship than just being really quick. Sure, luck is a factor, but so is consistency, something Rossi can attest to, having finishing in the Top 5 in every single round.

Handbags aside, a wonderful reminder of just how brilliant Dani Pedrosa can be. I thought he was done when he had the arm pump. Turns out the 30 year old still has a touch of class when the circumstances call for it. I just wish we had up the front more often. 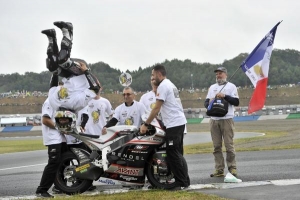 [/fusion_imageframe]A hearty congratulations to Johann Zarco, the new Moto2 World Champion. I’ve warmed to Zarco a lot this season as well, despite leading the title race since Argentina, he’s handled this season, with incredible work ethic and charm, and often very quick to compliment his team for making him this unstoppable beast he’s been this season.

Turns out, he won the championship before the race even started, with Tito Rabat having to pull out of the weekend after FP1, as his arm injury became too painful. Must be honest, I find it a tad concerning that he was declared fit to ride, then after a session of running, was then declared unfit to ride. Bizare, and pretty much the icing on the cake of what’s been an awfully unlucky season. Taking nothing away from Zarco’s title, but Rabat’s been plagued with bad luck from the get go, and I wish him a speedy recovery for his MotoGP debut after Valencia.

And in the race, Zarco double-downed on his title win, by taking a dominant victory, ahead of the surprising X-Factor of Jonas Folger, and they were MILES clear of the rest of the field, Sandro Cortese on the podium in 3rd was 15 seconds off the win.

Also, nice to see the wet weather throw up some surprises, like Aslan Shah having a tremendous race in 4th, ahead of Hafizh Syahrin and Ricky Cardus in the Top 6. Hopefully a race like this will be a big learning curve for riders like Alex Rins and Marquez, in their first Moto2 wet races, and who were 30 and 51 seconds off the lead, respectively. 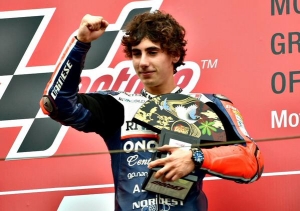 [/fusion_imageframe]Niccolo Antonelli is on it. It’s like the second coming of Marco Simoncelli is having in front of our own eyes! Okay, maybe a small exaggeration, but his run of form since finally getting that first win in Brno has been immense – 1st, 3rd, 3rd, 6th, and now 1st again. it was a Lorenzo-esque win, had supreme confidence to take a massive early lead in the wet, and held it, despite a hard comeback from Miguel Oliveira towards the end. Jorge Lorenzo mad an interesting comment as to Miguel’s comeback, blaming the distance of the races. Due to the fog and rain, Moto3’s race was only 12 laps as opposed to to the normal 21. Moto2’s was reduced to 15. Makes you wonder if we would have had more tyre issues…

…Anywho, a brilliant win for Niccolo, who’s now 4th in the Championship after Romano Fenati crashed from pole position. Speaking of the title race: 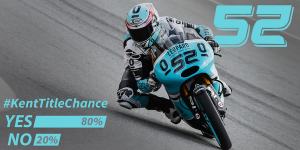 [/fusion_imageframe]I hate to bring the media into these things again, but, this is getting on my nerves now. From what I heard on the MotoGP live experience stream, and on BT Sport, Danny Kent is now immune from any and all criticism.

After the Aragon race where he completely bottled a chance to practically seal the title, everyone glossed over it because Enea dropped too. Kent was praised heavily during commentary after the race for being “smart” and “gritty” for finishing ahead of Enea… when he finished 2 places lower than where he qualified. How is that EVER a “great” race?Danny said he was following “his plan”. What plan involved dropping 10 places at the start of the race, and getting into scraps with Karel Hanika, arguably the most dangerous man in the field?

Danny will win the title, and he thoroughly deserves it. But I’m not going to sit here and blow smoke up his arse for being mediocre on the day. You want to praise some truly great rides? How about Issac Vinales in 4th, sticking it to his old employers? Or Khairuddin for finishing in the Top 5, 10 places higher than where he started? Or even if you want to follow the British agenda, John McPhee, for finishing 9th from 24th on the grid, given how much Saxoprint have struggled this season?