“The land of the Dre, and the home of the brave.”

Okay, I’ll be honest here – These set of questions were going to be for an episode of the #Motorsport101 Podcast, but with my workload getting bigger by the week now knowing I HAVE to make videos (More on that in an upcoming Newswipe), the Podcast might be on a hiatus, because having to organize, produce and edit is time consuming stuff, something I’m quickly lacking.

Anywho, you took the time out for me, so the least I can do, is make sure they don’t go to waste, so without further ado, here’s some Ask Dre questions I didn’t get around to answering straight away. My bad. But still, enjoy!

“Do you think Kawasaki will ever return to MotoGP?” – Pega Violin Surjaningtyas

Short answer – Nope. Kawasaki pulled out of MotoGP as a factory team sometime ago, and I can’t blame them. Building custom prototypes is really difficult and expensive work. Not to mention, Kawasaki, have arguably, the best road-to-race conversion Superbikes in the world, having the Manufacturer’s crown in the World Superbike Championship.

As we just saw, Kawasaki just smacked Ducati and Aprilia around to win that, and there’s another new Ninja coming next year. And I can’t wait to see how it goes up head-to-head against Yamaha’s R1M in the world’s this year, after it looks set to win the British Superbike title with Josh Brookes.

“If you could take any team and any two drivers from Indycar to be in Formula One, who would they be and why?” – Eoin Harrington

Ooo, this is a really good question. If I had to choose just two, I’d say Will Power and Sebastian Bourdais. Will Power has been a consistent force in IndyCar for a good while now, and has ridiculous speed, and Sebastian Bourdais has been there before, and has been amazing in just about every discipline he’s ever entered, from a 4-Time Champ Car Champion, to 3 runner-up finishes at Le Mans, and winning the 24 hours of Daytona. Seriously, Sebastian Bourdais is one of the most underrated racing drivers, EVER. I know these two could deliver.

And if I seriously didn’t care about performances, I’d want James Hinchcliffe and Conor Daly as my drivers. For the bantz. 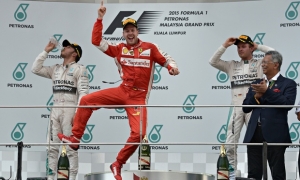 [/fusion_imageframe]“Will we see Ferrari improve as much over the winter as we did this year, and will Honda also make big improvements or still be terrible next year?” – Connor Pink

This question is all about one thing to me, and that’s “The Law of Diminishing Returns”. Ferrari’s 2014 car was awful by their standards. Probably their worst since 1991. Their 2015 car is way, WAY better. In F1’s world of “moving goalposts”, there will only be so much performance Mercedes can extract from their cars. So naturally, the field will catch up. It’s happened every time there’s been a rule change.

The kicker here is, the rules will take another big chance for the 2017 season. Whoever nails these new technical regulations will be the team to beat. We may only see Mercs on top for another year, so it all comes down to what Ferrari’s approach is.

As for Honda, I think they will get there in the end. They’ve had to play catch up to three other manufacturers who were better equipped and saw the changes coming. How long the process will take, and what their maximum will be, remains to be seen. Speaking of which…

“Who is more likely to win a Championship, McLaren or Red Bull?” – Miles Pardoe

To a degree, I feel sorry for McLaren, and especially Fernando Alonso, who’s had to defend his team’s woeful season almost every time someone shoves a microphone in his face. Why? Because McLaren knew that you can’t be a customer team and win in F1. You just can’t. Ask Williams. They had to do something different to have any chance of winning the big one, which is what a team with that kind of pedigree should be aiming for.

Problem is, Honda’s a supplier playing a massive amount of catch-up and with that, a commitment that means you just have to take the pain that comes with that until they can bridge that rather enormous 200+ bhp deficit. Like I said, Honda I think will get there (See my Law of Diminishing Returns answer on that), but the timescale is what could be the killer there. Mercedes were first building this unit in 2012. That should say a lot about what Honda have to deal with here.

As for Red Bull, we know they have the potential to do it. Their aero and chassis development are second to none. They’re like the FEISAR team in Wipeout, the car you really want to drive, but aren’t particularly fast.

Their problem is, no-one wants to give them an A-Spec power unit, and it’s easy to see why, given they won the Constructors title 4-years running. It’s a power unit sport now, would you want to be the company responsible for making Red Bull a top-tier team again? Sure, we the fans want to see a more competitive sport, but the team’s sure as hell don’t. That’s less advertising revenue on the table. Mercedes and Ferrari have road cars and future hybrid cars to sell. Remember: “What wins on Sunday, is sold on Monday.”

Red Bull definitely have the resources, the manpower and the potential to win, it’s just now, Power Units are more important than ever in an area where their past has come back to haunt them. If they can get over that, there’s no reason why they can’t succeed again, certainly more than McLaren do. There’s a good reason why McLaren haven’t won a WCC since 1998.

[/fusion_imageframe]Now, two rather similar questions here that I’m going to address, one from Adam Johnson: “With seats becoming more and more difficult to come by in F1, and guys like Max Chilton heading over there already, could Indycar become an alternate career path for young drivers in GP2/3, and of the current crop of young stars like Vandoorne and co, which of those do you think could make the move over to Indycar/Indy Lights and make it a success?” and from Marcus Hoare – “Where will Stoffel Vandoorne and Kevin Magnussen end up racing next year? Could K-Mag possibly move to sports cars like his dad?”

Excellent pair of questions. Much has been made of Stoffel Vandoorne, and his future is still up in the air. We now know that McLaren have now pretty much committed to Button and Alonso until at least 2017, meaning K-Mag and Stoffel probably won’t be in F1 next year, unless they break off from the team, or Ron Dennis pimps out his talent to Renault, or the 2nd seat at Haas, which looks set to be occupied by Esteban Gutierrez.

I feel bad for both of them. K-Mag was the unfortunate victim of Fernando Alonso just becoming available, while Stoffel’s 4th in the pecking order and has been F1 ready for two years now, with McLaren having the luxury of an astonishing YDP, but without the luxury of a 2nd team to share the load. Now with arguably the best driver line-up in the sport, Dennis has thrown that programme under the bus as the sacrificial lamb.

[fusion_imageframe lightbox=”no” style=”bottomshadow” bordercolor=”” bordersize=”0px” stylecolor=”
” align=”right” animation_type=”fade” animation_direction=”right” animation_speed=”1″][/fusion_imageframe]Now, a few people have speculated about going to IndyCar, but the problem is, it’s really not as simple as that. IndyCar don’t want to look like a series that just leeches off of F1 drivers who didn’t make it, and there’s a lot of established talent in the field, like Power, Helio, Montoya, Bourdais, Andretti, RHR, etc. Not to mention, it’s a series that’s also got a ton of younger talent pushing through now, like Sage Karam, Graham Rahal and Josef Newgarden, the latter two having a huge breakout year. It’s not going to be easy to get your foot in the door, when they have their own dedicated Indy Lights system.

Now, Max Chilton is a guy I can applaud for having the ingenuity to think [/fusion_builder_column][fusion_builder_column type=”1_1″ background_position=”left top” background_color=”” border_size=”” border_color=”” border_style=”solid” spacing=”yes” background_image=”” background_repeat=”no-repeat” padding=”” margin_top=”0px” margin_bottom=”0px” class=”” id=”” animation_type=”” animation_speed=”0.3″ animation_direction=”left” hide_on_mobile=”no” center_content=”no” min_height=”none”][fusion_tooltip title=”(Seriously, we Brits are so arrogant, we never want to leave the country)” placement=”top” trigger=”hover” class=”” id=””]outside the box[/fusion_tooltip], and his first season in Indy Lights was solid, 5th overall, having missed 3 races. And I think there’s a better chance of promotion from Indy Lights into the full series, than GP2, where it’s Champions exclusion rule is shite unless there’s a guaranteed seat at the end of it, which hasn’t been for years. But we all know F1 and driver talent go together about as well as chalk and cheese.

Will it work on the whole though? I’m not so sure. If more people cotton on, they’ll be more competition, and if there’s more competition, more people are going to miss out. But that could be to IndyCar’s gain if top talent comes through five years from now. It’s never going to be a perfect system, but if there’s more platforms for young talent to flourish on a big stage, than that’s good on the whole. As for who could make it… who knows. As I said, it all comes down to who wants to go to America badly enough. Worked out for people like James Jakes and Stefano Coletti for instance. Me personally, I’d like to see Dean Stoneman give it a chance, given he has 0% chance of ever getting a Red Bull seat.

As for K-Mag, I think he could be amazing in the Sports Car world. He was very unlucky to have lost his seat, he was no worse in there as a rookie than Perez was the year before. There’s always seats available in Sports Car racing, and I think he may have to look down that road. F1 drivers getting a 2nd chance, is sadly, really rare. 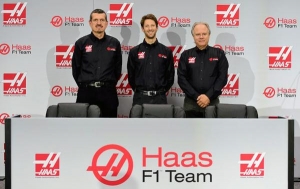 [/fusion_imageframe]“How far do you think Haas can get up the grid in their first year?” – Cameron Buckley

I think they can score low-level points. Seriously. I know I’m speculating to a degree, but here’s two definite things we know about this team – 1) Gene Haas has more money than God, and is willing to lose $100m a year to make this work, and 2) He’ll have 2016 Ferrari power-units and it’s a PU sport.

Those two elements are a good sign. F1 is an arms race when it comes to development spending, and Haas is willing to drop some serious change. Combine that with near up to date Power Units and a star lead driver in Romain Grosjean, this team is shaping together quite nicely. If it can build a half decent chassis, I think they can be a good team in the long run. And Graeme Lowdon of Manor backed this up, he had similar thoughts to what I had going into this.

And finally… “Would you and Bex commentating on MotoGP or WSBK together be a good idea or one from the pits of Hell? :P” – Gareth Hunt

Oh dear GOD. Look, this would not be a good idea – I’m not that good a commentator (Seriously, I’d make Keith Huewen look like Toby Moody), and if Alex Lowes ever had a good day at the office, I’d be cleaning up after my co-presenter! 😉