(Special thanks to the rather lovely Zara Daniela for permission on the amazing poster! Go follow her, she’s the bestest.)

What in the F*** happened this weekend? After Germany was relatively tame for MotoGP standards, Indianapolis, Round 10 of the Championship produced one of the simply outrageous weekends in all of MotoGP this season, with all three races being packed with drama and crazy action. Marc Marquez and Jorge Lorenzo committed a Marvel-esque Civil War for American honors, while the secondary riders of Rossi and Pedrosa had a dice of their own for 3rd, while Moto2 had the best race of recent times, with the changeable conditions reeking havoc with the Moto3 as Livio Loi claimed one of the biggest upset wins in the history of the sport. Happy podiums for the win, as we discuss one crazy weekend in Indianapolis. 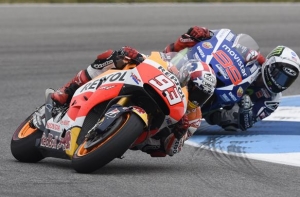 Still not convinced Marquez was back to his best? Think again. This was a sensational race, filled with tension and drama at the top with Jorge Lorenzo taking yet another hole shot, before being in control of the race for the vast majority, but with Marc Marquez always behind, laying in wait for his moment to strike, and with 3 laps to go, he pulled the pin and never looked back, with a superb dive down the inside of Turn 1 to seal the deal.

It was a mesmerizing performance from the pair of them, both were just on another level. To put it into perspective, this was the fastest Indianapolis GP ever, and they both set consecutive lap records. On Lap 23. With light rain in the air. Ridiculous. We witnessed the two best riders of the last 5 years going head-to-head at the absolute limit. And it was fantastic.

And behind them, we had another terrific scrap for 3rd between Valentino Rossi and Dani Pedrosa, the former bullying himself through on the final lap into Turn 2. Another brilliant scrap and about as good a damage limitation job as Rossi could hope for.

Marquez’s record in America is utterly bonkers. This was his 7th win out of 7 in America since his MotoGP debut in 2013. Also, with this being his 48th win in all-classes, he’s just one behind Dani Pedrosa’s 49 for 8th on the all-time list. So, we do start playing the “Jaws” theme for Marquez now, or later? You may not realize it yet, but he is the X-Factor in the title race, and we need him up the front. I still believe he has an outside chance at the title, but he has to keep winning, and the real test will come with a bunch of Yamaha-favoured tracks like Brno and Silverstone coming. But if anyone can do it, it’s Captain America… 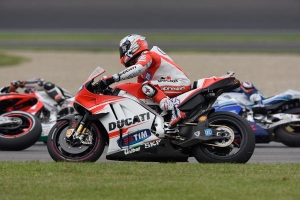 So, when does a bad run of form become a legitimate concern? Because I’m starting to look at the other side of the fence, given the form of Andrea Dovizioso lately. His last five races – DNF, DNF, 12th, DNF, 9th. Indy was yet another week to forget for the 29 year old, qualifying in a mediocre 10th before running off into the gravel on the opening lap, recovering to 9th, as his teammate Andrea Iannone continued his fine run of form, with another Top 5 finish, his 9th in his 10 races at the Factory Ducati team. He’s now 35 points behind Iannone. I’m not ringing alarm bells just yet, but there is cause for concern. Dovi hasn’t got to worry about his job security, he’s already been confirmed for next year, but I wonder if Ducati will give them equal treatment if Iannone keeps performing at a World Class level…

…Meanwhile over at Tech 3, on BT Sport’s coverage, Neil Hodgson put Herve Poncharal on the spot over Bradley Smith’s lack of contract renewal. The Brit has been sensational this season, the top Satellite rider in the field by 23 points, and he was top rider in that division again at Indy. Yet, a lot of Smith fans raised an eyebrow when it was revealed that Pol Espargaro had been signed to a 1-year extension at Tech 3, and not him. Herve danced around the hard questioning, but it is a bit of questionable one.

Don’t worry, I know that Bradley and Pol are on different contracts, the latter being taken care of by Yamaha as a Factory deal as opposed to Bradley, and I know British fans are the quickest to kick up a fuss, but we need to relax. I suspect many people took the rumour of Bradley not getting preferential treatment at Tech 3 as a warning, but we also need to realize that Bradley, is not the Valentino Rossi replacement, rightly or wrongly. Now, I’ve mentioned that a Factory contract seems pointless when Lorenzo’s a Yamaha man for life, and Rossi wants to ride till 40, but of course Yamaha are going to invest in their guy. It’s smart business. Shame he’s 2-8 against #38 this season, mind.

Bradley will get re-signed, don’t worry. Because at the end of the day, what’s the alternative? Pramac? Yeesh. 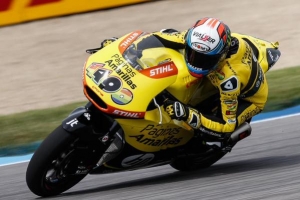 This was coming, for sure. Alex Rins finally overcame the stacked odds of Moto2 to take his first class victory, in what was a spectacular race from start to finish, packed with action. Seriously, this might be the best Moto2 race of all time.

Julian Simon was insane on the opening lap, incredible bravery, but fell early on. Hafizh Syharin out of nowhere, was challenging at the front and pulled off a sensational double pass to lead for brief instances. Sadly, he fell on the final lap, from what would have been a Top 10 finish. But it was an incredible battle for the lead between Johann Zarco, Tito Rabat, Dommy Aegerter, Alex Rins, Thomas Luthi, Mika Kallio, and Sam Lowes, and all hell broke loose. I’m astonished that the only needlessly bad pass was from Sam, as he took out Mika Kallio, with the Finn breaking out the bird in displeasure, and I can’t say I blame him. Of course, Sam hit the deck too late on, for the second year running. *sigh*

This race, was probably the best exhibition of just how stacked Moto2 now is, and how one mistake would cost you dearly, like Tito Rabat, who rode over the final corner curve with 3 laps left and never got back in the hunt, but it was Rins who broke free right at the end, taking advantage of a Zarco v Aegerter fight to win by 0.4 seconds. Props as well to Frankie Morbidelli on his first Moto2 podium, a nice resurgence after that awful mistake at the Sachsenring.

Is Rins sure he wants to stick around next year? We’re seeing another Maverick Vinales in our midst, methinks. If only he wasn’t so scrappy at Jerez and Le Mans… 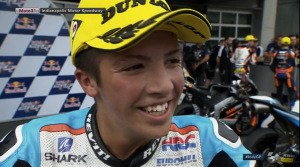 No seriously, what in the holy hell happened here? So, from what I could roughly gather, this was a changeable conditions race on steroids, with the bikes in rain mode, but the track quickly dried out, meaning everyone had to change bikes… except for Livio Loi, who gambled on the slicks, and John McPhee, who did the same, but did it too late, and had to take a Ride Through Penalty, which sounds bad in theory, but given it can take a Moto3 team around 2-3 minutes to change tyres, in hindsight, it was an awesome switch.

So, through all the carnage, it was Livio Loi who took, arguably the most comfortable win in Moto3 history, all as a result of a genius gamble by the RW Racing team. And it was arguably the happiest podium in Moto3 history, with John McPhee getting his first podium in 2nd, and Phillip Oettl in 3rd, his first podium, a mere 19 years after his Dad, Peter, did the same in the 125cc class. It was genuinely wonderful to see such a happy, delightful podium, especially in the case o Livio Loi, a kid that was unceremoniously dumped by Marc VDS as a 17 year old for not being particularly fast. Nice to see Issac Vinales in the Top 5 too, way to stick one to Husqvarna after being dumped by them too.

Danny Kent wasn’t best pleased after the race, and while I get his frustration at a needlessly long tyre change, I think he needs to settle his tea kettle a bit. He only lost 10 of his 66 point Championship lead to Enea Bastianini’s 6th place finish, and he completely threw his team under the bus for it. Dude, this team has made you the monster you are today… don’t throw them under it for the ONE time you’ve finished outside of the Top 4 this season. I guessing because Danny’s never been in this fortunate position, he fails to understand, but sometimes “Damage Limitation” given the circumstances, isn’t that bad a day at the office. Bigger picture, no?

Bookies Manager, writer, podcaster and video maker for all things Motorsport. Loves sneakers, card games and sports, but refuses to stick to them.
View Full Profile
PrevPrevious PostSebastian Vettel – A Realization of the Great
Next PostThe Conundrum Of 52Next