Sebastian Vettel – A Realization of the Great

“Seriously, we need to stop questioning this dude.”

Last weekend’s Hungarian Grand Prix marked a milestone in the life of Sebastian Vettel. It was his 41st career victory, matching the great Ayrton Senna, taking him to third on the all-time list for race wins. And he did in 12 less races than Ayrton too. But more than anything else, this was a race that, for me, was the landmark of a resurgent comeback for the 28 year old German.

2014, was a year from hell for what was, the four-time reigning Champion. Red Bull humbled by a new era of rules, dominated by an incredible Mercedes team. And for Sebastian himself, completely out-classed by a relative unknown, a new star, in Daniel Ricciardo. who had the Red Bull RB10 on lockdown from the start, shocking the F1 world with three wins, and beating Sebastian by 71 points.

The announcement of the switch to the Ferrari was looked at in many different ways. Some looked at it as an act of cowardice, running away from the upstart Ricciardo using a convenience clause in his contract. Many others were excited to see what Seb could do outside of the Red Bull umbrella, a group that had backed him from the age of 12. In any case, for the first time in eight years, we were gonna see what Vettel could do in a car that wasn’t Purple, and the biggest team in F1 to boot, the team that not even the great Fernando Alonso couldn’t win out of. The world was waiting. 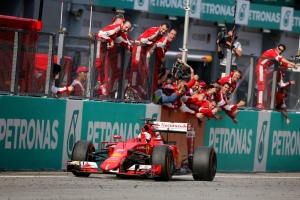 [/fusion_imageframe]March 29th, 2015. After finishing Australia on the podium, narrowly beating Felipe Massa’s Williams, Ferrari looked strong. But no-one could have envisioned what happened next, a true shock as Mercedes were beaten head-to-head on raw speed alone for the first time in the hybrid era, and it was Sebastian Vettel’s 2-stopper in the Malaysian heat that won him his first race at Ferrari, their first win since Spain 2013, and the shot in the arm the sport needed. And as Ferrari’s crew smiled in the midst of McLaren’s struggles with Fernando Alonso retiring, there was a change in the Ferrari crew – They looked motivated, happy, with hope, the team belting out the Italian National Anthem underneath the podium. In the 5 years Alonso spent there, I’d never seen a reaction like it. Sebastian had given the team hope.

And while Seb’s season hasn’t been perfect, his consistency, and clutch performances when they’ve been needed, have been superb. A small dip in Bahrain where he fell to fifth, but, on the whole, seven podiums in his first ten Ferrari races, including a brilliant comeback from an MGU failure in Canada qualifying to finish 5th from 18th. Also, an opportunistic 2nd in Monaco to split the Mercs, all highlights in an incredible season so far, alongside the two victories on merit. 160 points in 10 races, just 7 points off his ENTIRE 2014 season haul. This could be the greatest season to ever finish 3rd in the table, purely on the strength of the Mercedes alone. 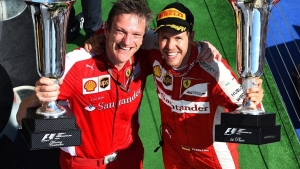 [/fusion_imageframe]But what this season has highlighted more than any other, was that you can bounce back from a bad year, and it can happen in Formula 1, and that we shouldn’t be so quick to condemn drivers after said bad season. It’s happened to the very best. Lewis Hamilton, the dominant Championship leader, went 5 seasons before getting back at the very top after winning his first World title in 2008, and McLaren in that spell, always had race-winning, Top 3 cars. Fernando Alonso was competitive, but he too got caught out by a rookie Lewis Hamilton in 2007, and his decision making has ultimately damaged what could be a true Hall of Fame career. Seven more strategically placed points, and he has FIVE Championships. And let’s be real here, do you really see McLaren Honda getting anywhere near where the team was during Hamilton’s final season there in 2012?

What I’ve just mentioned, is for me, the “Holy Trinity” of this era. Lewis Hamilton, Fernando Alonso and Sebastian Vettel are the three best drivers since Schumacher left Ferrari, and I don’t care what you all tell me about how the cars are easier to drive now than they were back then, that’s called technology – They would hold up in any era, and while there’s an argument you can make for all three here, Seb’s star I think personally, shines a little bit brighter.

I mean, let’s think about this here – Statistically, he’s outrageous. He’s the youngest race winner and World Champion in the history of the sport. He’s now won a race for three different teams. He’s the sport’s all-time leading points scorer. And he’s bounced back from the the only real mediocre season he’s ever had. The doubt’s that were rained down over Sebastian’s greatness after last season, the vindication of “It was all the car”, is losing weight by the race. Sometimes, a bad season, really is, just a bad season.

As I’ve mentioned in previous columns though, I don’t think Sebastian will ever get the true credit he deserves for his career, until after he retires. At best.

This is an era where we focus on the top. Lewis Hamilton is at the summit again for the first time in six years, and as a result, the media has completely sucked into it. A lot of it is understandable, the sport has an enormous British following and always will, but the over-blown Hamilton vs Rosberg feud has become the narrative in F1 for a season and a half, not to mention the personal life outside of F1 that Hamilton has wrapped himself up in for many years. I mean, wearing a shower curtain and trainers to a royal box at Wimbledon? Really?

Sebastian was so utterly condemned after “Multi 21” at Malaysia 2013, that he was labelled “Darth Vettel” for stabbing Mark Webber in the back. Because y’know, you can hate team orders, but if you break them, you’re bad too. Sense. That made it. Seb was already having public opinion turn on him for winning so much and not being named “Michael”, but the boo’s rang for 10 rounds until Singapore, where the paddock finally took his corner, including Martin Brundle famously on the podium. But I still wonder how on earth people could be so disdainful after his team radio in Malaysia. This is a man who’s won 40 times, won 4 Championships and still celebrates like he’s just debuted. And dedicating his Hungarian win to Jules Bianchi, had me in tears.

The U-turns people have made on Sebastian, from the guy ruining the sport with his dominance in 2013, to now being embraced and more appreciated in the Ferrari red in 2015, is shocking, and speaks of the measure of the driver, and the man. Amazing considering, he’s never really changed his character in that time, but the perceptions of him has.

What I’m saying might be a tad bold, but I think we’re witnessing the second coming of Alain Prost. He didn’t have the amazing backstory and the passion that appealed to so many, like Ayrton Senna did, and what Lewis Hamilton has now, as the “pure racer” moniker resonates with so many. But what Sebastian has shown over the years, despite not being “the guy”, he went from team to team, maximising what he had, and being consistently at the top for a decade. I think that’s a much more apt comparison than Ayrton Senna, where I feel so many fall for the story, and feel so strongly about him, any talk of comparisons get shot down at the door.

And that’s what saddens me, as I feel Prost so often gets overlooked in comparison to Senna and other greats in F1, and I fear Sebastian will get the same treatment. We’re witnessing one of the greatest drivers to ever grace this sport. I say, let’s embrace what we do have, as opposed to looking for the first sign to take them down a peg. And with a little luck, he might be the catalyst for more positivity in a sport than right now, needs it more than ever. And heck, winning one of the races of the decade kinda helps. The prancing horse is back, but Sebastian Vettel’s always been here. And that’s awesome. You probably just don’t realize it yet.[/fusion_builder_column][/fusion_builder_row][/fusion_builder_container]