It’s amazing how the landscape in F1 can so quickly change. Three weeks ago, we were celebrating a brilliant British Grand Prix, a race that F1 so desperately needed after a season that had everyone in the community pointing fingers at each other. And then, we lost Jules Bianchi. And just like that, Motorsport fans gathered together at the Hungaroring and paid their last respects to what was an excellent talent. RIP Jules.

And with his name still ringing in so many people’s ears, Formula 1 put on an incredible show, and in what was arguably the craziest race since Canada 2011, it was the calm head of Sebastian Vettel that led it pretty much from start to finish, taking advantage of yet another bad start from Mercedes. But this race had so much more than that to it, so, of course, let’s try to make some sense of it here with my Hungarian Grand Prix Review! 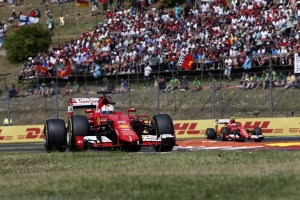 Through all the craziness, the only consistent factor in the GP, was that Sebastian Vettel led from Turn 1, all the way to the end, with one of the best drivers of his career. Yes, he took advantage of another Mercedes dreadful clutch, but the opportunity was on a plate, and he took full advantage. Heck of a job for Kimi Raikkonen to pass both Mercs from 4th as well. And what was most surprising about all this, was that he led from the front, unopposed. Mercedes, just didn’t have an answer for him, or Kimi, something that’s only happened once before, and the Malaysian race felt more like a superior strategy call than a straight up beatdown.

After the Safety Car, Seb does what he does better than anyone in the field, put the wall up and survive. He did just enough to keep the rampant Rosberg and Ricciardo behind, even more so with Kimi the rear gunner gone with an MGU failure. Danny and Nico never got close enough to try a move, very reminiscent of Monaco 2011, only with the odds even more stacked against him. Sure, the dirty air factored against him, but Hungary had far more passes going for it this time around than in other years.

With this win, Sebastian claimed his 41st career victory, tying him for third on the all-time list alongside the great Ayrton Senna. In 12 less races too. Whatever your stance, we’re talking about two [/fusion_builder_column][fusion_builder_column type=”1_1″ background_position=”left top” background_color=”” border_size=”” border_color=”” border_style=”solid” spacing=”yes” background_image=”” background_repeat=”no-repeat” padding=”” margin_top=”0px” margin_bottom=”0px” class=”” id=”” animation_type=”” animation_speed=”0.3″ animation_direction=”left” hide_on_mobile=”no” center_content=”no” min_height=”none”][fusion_tooltip title=”No, I’m not touching this one. The amount of butthurt Senna fans on the Internet aren’t worth it.” placement=”top” trigger=”hover” class=”” id=””]legends[/fusion_tooltip] of the sport here.

Craziest stats of the day though? Seb’s now the only driver in the field to have finished every race in the Top 5. And given he only has 9 points less than his ENTIRE 2014 season, we’re gonna have to accept that the real Sebastian is back, and will more than punish Mercedes if they slip up. Speaking of which… 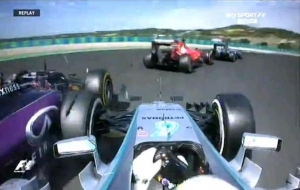 On paper, this was the worst weekend Mercedes have had since the last ever V8 race, the 2013 Brazilian Grand Prix. This weekend was a comedy of errors for the dominant Anglo-German outfit. Right from the start, another instance of a terrible clutch affecting both cars as both Mercedes were caught in the run-down to Turn 1. Then, Lewis Hamilton had one of the worst performances I’ve ever seen him drive in. First, on Lap 1, he tries a lunge into the chicane, locks his tyres up and runs into the gravel, falling to 10th.

Then, while climbing back up through the field, he under-steered into Ricciardo’s sidepod at Turn 1, lost an endplate, had to stop the extra time, then had to take a drive-through penalty for causing a collision. Lewis had to be aggressive, and I get that, but he dug himself into a hole that not even he could climb out of… so of course he managed to extend his Championship lead.

Nico Rosberg was a more curious case. He was uncharacteristically slow, then, went to the hard tyre for his final pitstop and then paid the price when he couldn’t get close enough to Vettel on the restart, and had to defend from a charging Daniel Ricciardo on the the option tyre, yet another walking advert for ground effects aero, but I digress. I don’t care what excuse he or Mercs comes out with, that was another poor strategic call that could have cost them the win. I mean, really, you were one lap away from being able to run the soft’s? Where’s Shia LeBeouf when you need him?

As for the Ricciardo/Rosberg clash, I have it a a 51/49 incident in the fault of Rosberg. Rosberg clearly didn’t see Ricciardo coming out of the exit for one, and Rosberg should have given Ricciardo the room, despite him doing wheel to take avoiding action when Ricciardo committed to trying the dive bomb into Turn 1. A complicated incident, but I feel the stewards got it right to give no penalties out. For me, a racing incident.

But the brutal puncture dropped Rosberg to 8th, a cruel blow to what could have been the race that would have tied the Championship up. That’s racing for you, and a weekend Mercedes will want to forget, and for both drivers, a missed opportunity to land a haymaker in the title race. 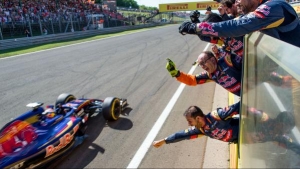 [/fusion_imageframe]A Great Day for the Minnows

On paper, this was meant to be a weekend that Red Bull were going to be strong on, as Hungary places less emphasis on engine power. And while the race pace wasn’t quite there from the Red Bull’s, the opportunity to attack was there after the Safety Car when Ricciardo slapped on a pair of option tyres, and was basically told to go crazy. And he did.

Daniel Ricciardo has looked pretty mediocre in 2015, mostly down to his car, but this race was a little reminder as to what he can do when the cards fall for him, and many forget, despite that Rosberg divebomb, he made the corner. Just. A great performance from him, and Danill Kyvat as Red Bull took their first double podium since the Singapore GP of last season.

And heck, it was a Dr Marko 1-2-3-4, as Max Verstappen battled through the war of attrition to finish 4th, Toro Rosso’s best result since China 2008, and a result that adds Toro Rosso to the fight for 5th in the Constructors.

Also, a double McLaren points finish as Fernando Alonso finished a sensational 5th for McLaren, and it was charming to see him go off and attack for once. Yes, a McLaren on the offensive! Yay! Nice of them to get both cars in the points too, as Jenson Button matched his Monaco result in 8th.

And we got Marcus Ericcson in the points, too! Nice to see him get one up over Nasr. 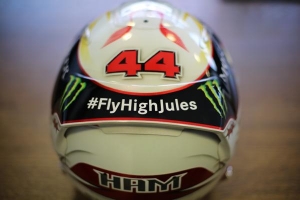 As mentioned, everyone raced with a heavy heart this weekend, given the tragic loss of Jules Bianchi. The tributes poured in, the podium sitters dedicating their performances to him, and the circle of the driver’s arm in arm with helmets around Jules, was a genuinely touching and beautiful moment.

And it’s a nice coincidence that this was such an exceptional race. It had surprise, it had great passing, genuine drama, a Safety Car that changed the dynamic of the entire race, we finally see Mercedes get taken down a peg, and there wasn’t a dry eye in the room. The perfect send off heading into the month long summer break. This one, was for you Jules. You’ll be sorely missed, but at least we’ll have one of the great races of our time to remember you by.

Dre Harrison, 28 year old Bookies Manager and hobbyist Motorsport journalist. Lover of sneakers and sports, but refuses to stick to it.
View Full Profile
PrevPrevious PostRIDE Game Review
Next PostSebastian Vettel – A Realization of the GreatNext