“One of the greatest races I’ve ever, EVER seen.”

What in the HELL just happened?! I’m sitting down to write this review an hour after the race had finished and I’m still in shock. Round 13 of the MotoGP Championship headed to Misano, and we got one of the greatest races in the history of the sport. Marc Marquez finally quelled the demons of the past, finally getting his first Misano win, the Rossi podium streak ended, but the fan club were still happy with Lorenzo crashing for the first time this season in a shocker, and the story of how a rider crashed, and STILL got on the podium, in one of the most unpredictable and shocking races, in the history of the sport. Oh, and Moto3 wasn’t half bad either.

PS: MASSIVE thanks to Zara Daniela for use of the Iron Marc header. It’s wonderful, and you should really follow her cool work at @ZaraZahid on Twitter, and her website, Mind Puncture. Thanks Zara! <3 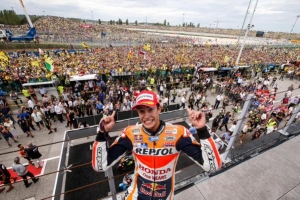 This was ridiculous. Estoril 2006 levels of ridiculous. A race that started dry, got wet enough to change bikes as a flag-to-flag race by Lap 2, but then got dry enough to switch bikes again, back to the dry’s. I seriously think this is the first 2-stop MotoGP race EVER. If there’s been another, feel free to let this writer know.

It was a race with Lorenzo in control, but Rossi and Marquez close behind, but with around 18 laps to go, the leaders came in to switch to the wet bikes, Rossi losing time on a dreadful pit-stop, but the rain had quickly stopped, and it was Loris Baz who was first to react, and he came through amazingly in the end. Marquez was the first leader to switch, but Yamaha left it too late, and it cost Rossi and Lorenzo dearly. Lorenzo was going to get a gift of a 2nd place, until he crashed out with a huge highside before the hill. Luckily, no lasting damage.

But Marc Marquez would go onto to win a sensational race, one of the most spectacular in the history of MotoGP. Let’s break down the rest of the running order:

2nd – Bradley Smith: A Career High for the Brit after somehow, never changing his bike, even through the wet weather. Very smart ride for the Brit and the cherry on top of what has been a superb season for the man. Delighted for him.

3rd – Scott Redding – HE CRASHED ON LAP 6. Has that ever happened before, where a rider has crashed, continued, and finished on the podium? After the awful season’s Scott had till the 6th in Silverstone, what a sensational bit of luck for the Brit. Also, this meant for the first time since the opening round of 1979 that two British riders were on a top class podium. BT Sport still have their trousers around their ankles.

4th – Loris Baz – I don’t care what anyone tells me, this was the ride of the season. Loris Baz was the first to gamble when the track dried up, and like his former Forward Yamaha rider in Aleix Espargaro at Aragon last year, he got the sweet reward of a 4th placed finish, the 2nd best EVER result for an Open Class bike, in what could be his final MotoGP race. An incredible way to bow out if this is the end, but a magnificent performance nonetheless.

This race has to be seen to be believed. It was magnificent. I don’t normally condone piracy, but this one, you HAVE to see. Go out of your way, it was up with Estoril 06’ as one of the greatest live races EVER. Valentino Rossi how has a 23 point lead with 5 to go, you have to think he has one hand on the title if he can keep his astonishing level of consistency going. Sure, he was a little lucky Lorenzo dropped the way he did, but hey, they all count.

You know how they often say sometimes it’s better to be lucky, rather than good? I feel like this could easily apply to Johann Zarco, after he was seemingly outclassed, but got a stroke of luck. With the surprise of Dominique Aegerter leading the way, Alex Rins tried a marginal at best lunge at Turn 13, got it wrong, and took himself and Dommy out of contention. 3rd placed Zarco would then go on to dominate for the win. When things have gone well for Zarco this season, they’ve REALLY gone well for him. Zarco now with a 97 point lead, and he can win the title with a win at Aragon. Someone get the T-Shirts ready.

Disappointed that Alex Rins decided to get involved and mess with the leaders after being lapped… then started waving to the fans after getting disqualified for it. Bizarre and a real head-case moment for the guy who’s been brilliant so far this season.

Excellent comeback from Tito Rabat to finish in 2nd after complaints about having no front-end grip until the 2nd half of the race, and well done to Taka Nakagami in 3rd for the AirAsia team, a rider who’s not smelt said podium since this very race two years ago. Hopefully he can return to something like that 2013 form that gained him a lot of fans. Generally speaking, the Japanese really need a rider like him up the front. 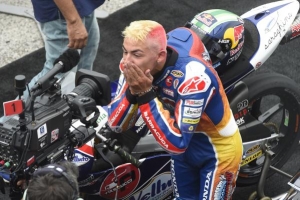 We did actually get an Italian rider on the top step this weekend, but not the one many expected, as Enea Bastianini, after SIX career 2nd place finishes, finally took his first Career win, with Misano as home a circuit as you get, given he lives just 5 minutes down the road! No-one in the field has deserved this moment more, than young Enea. It’s easy to forget he doesn’t turn 18 until December! What a talent.

It was another sensational performance from The Beast, who diced hard with Miguel Oliviera who had controlled the majority of the race, along with Niccolo Antonelli to round off the podium, the other young Italian who had waited his whole career for a podium, and has now had 3 on the spin. Can you get London buses in Italy?

Not such a good day at the office for Championship Leader, Danny Kent, who finished a mediocre 6th after suffering a “one place drop” for repeatedly track extending. F1 fans would rejoice at a spectacle such as this, but given the next group were multiple seconds back, it was a nasty penalty and I believe, a little harsh. But still, he’s lost another 15 points to Enea, taking the gap back down to 55 points. Makes you wonder if Enea had never dropped from 5th at Silverstone, we might have still had a title race…