Hey folks, Dre here again, and today, April 19th 2015, the world’s best motorcycle rider was taught a valuable lesson. Don’t f*** with The Doctor. In one of the most thrilling and tense races in recent years, Marc Marquez took one gamble too many in a desperate attempt at victory as Valentino Rossi pulled out yet another magnificent performance to win his 2nd race of the season, as Marquez was left to pick up the pieces.

In other news, a resurgence of form for Cal Crutchlow as he scored his first Honda podium, Johann Zarco gave us yet another new winner in Moto2, as Alex Rins continues to impress, and in Moto3, Danny Kent somehow found a way to go even faster than in America, as drama and chaos descended in Moto3… but it wasn’t during the race. That and more as I take a look at the best of the Argentine action. 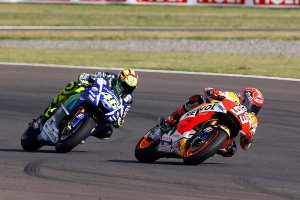 The story of this race came down to a rare circumstance – tyre choice. This was the first time we had seen the Extra Hard compound from Bridgestone in effect, and while everyone knew they had the durability to last the race, there was question marks over their pace. Marc Marquez chose the softer “Hard” compound tyre at the back, while Yamaha rocked the Extra Hard’s, and it led to one of the all-time dramatic MotoGP races.

Marquez blasted off and set off a 4-second lead in the opening 10 laps, but afterwards, his rear tyre started to degrade, and ever so slowly, Valentino Rossi started reeling him in at a rate of about 0.4 seconds a lap. With two laps left, Rossi lined Marquez up for a pass, and seemingly had him… but on the exit of the hairpin, the two were fighting for the same piece of tarmac and down Marquez went as Rossi would ramp home for an easy victory.

This race took me back to Jerez 2005, where Sete Gibernau was bumped off the road by Valentino Rossi to win at the final hairpin. Many riders have tried, but the lesson is still the same – You CANNOT bully Valentino Rossi on track. You will lose. And I think sometimes, because of his incredible talent, its very easy to forget that this is just Marc Marquez’s 3rd season, and this was just his 39th race in the top class. And the fact he’s still learning from his idol and hero, will only serve to make him a better rider. And that in itself, is terrifying. The lesson learned for Marquez – Sometimes, second is okay. 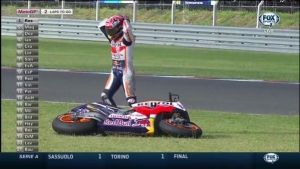 [/fusion_imageframe]And don’t think Repsol Honda are off the hook. I ultimately hold them responsible for what was a poor decision. They changed their minds at the last minute from the Extra Hard to the Hard compound on the grid, and it came back to hurt them. Marquez’s race pace was just as good on the harder rubber, so it made the decision to switch seem like an unnecessary gamble. A double donut for Repsol is not a good look, and it took a superhuman job from Marquez to even hang on as long as he did on a tyre that was wrecked at half distance.

This race, was the best Rossi performance since he’s returned to Yamaha. Fast. Tactical. Cunning. Smart. And ruthless when the time came to seal the deal. Vale is still a title threat. At 36. That too, is terrifying. This season has already had two race of the century contenders, and this one, with the story it told, will not be forgotten about in a hurry. See Mark Webber, who said tyre degradations were a bad thing? I hope Bridgestone can find a way to have more races with alternate strategies like this again, because it made for a brilliant race.

PS: What a brilliant final corner pass from Cal “Clutch”low on the last lap to take his first podium as a Honda rider, in just his third race. An excellent ride and excellent day for the CWN-LCR team as Jack Miller was top open class runner in 12th as well. And for Cal, a silence to the critics. 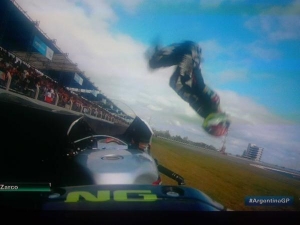 It’s been a while coming, but I for one am glad that Johann Zarco got what he probably deserved in Qatar, and that was his first Moto2 win, which he took in a controlled and well-paced affair.

Zarco took advantage or a squabbling 2nd field of Sam Lowes, Alex Rins, and Xavier Simeon, the latter hitting the deck with seven laps to go. By the times Lowes had established himself in 2nd, he just didn’t have an answer for Zarco’s two second advantage, and avoiding a scrap with Alex Rins, let him through to protect his spot on the podium. Some may call it soft, but given the state of the main event, in the long run, that may have been the smart thing to do.

And for Zarco, a brilliant celebration as he backflipped off the barricade in full racing gear and helmet. Impressive. 9.5 from the Russian judge for a superb dismount. We need more celebrations like this, Valentino’s given that shit up now! For me, Zarco should now be title favourite, as we’ve yet to see the best from Tito Rabat, who despite recovering well from a Lap 1 mistake, could only manage 12th. It looks like Lowes, Zarco, and Rins are the big three at the moment, with Simeon and Rabat also potential contenders, but with a lot of work to do. 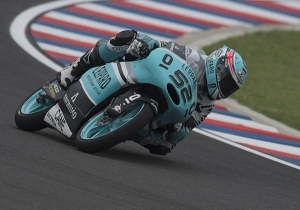 You want to win? Find the 52. It’s like James Toseland has risen from the broken wrist. I thought COTA was insane… Somehow Danny Kent managed to find a way to top himself again somehow, with the biggest margin of victory in any dry Moto3 race ever – A 10.3 second win over his own team-mate Efren Vazquez for the victory. Yet another stunning performance from the Brit who has had a second coming under the Leopard Racing banner. Simply astonishing stuff, and the ride of a true Champion.

Yet another race worth seeing though as 2.3 seconds covered 2nd placed Vazquez to 15th placed John McPhee, with position exchanges galore. Minor props go to Romano Fenati for coming from the very back to finish in 8th, and Miguel Oliveira matching his best Moto3 finishing in 4th place, finally getting off the board. And the way things are going with Kent, Alexis Masbou and Niccolo Antonelli’s drops could prove costly. But I have a couple more Moto3 notes worth mentioning… 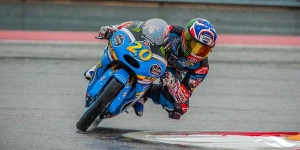 [/fusion_imageframe]Something HAS to be done about Qualifying

Okay, this is getting freaking ridiculous now. Something has got to be done about Qualifying now. From the utterly stupid Livio Loi and John McPhee crash in practise, to the fact we have 20 riders sharing the same 5 seconds of race during Qualifying, something has to be done, because you just can’t have 34 people on a track only 110 seconds long, which is small and narrow, be out there trying to set hot laps and looking for slipstreams, all at the same time. It’s not representative, and sometimes, I can’t help but shake the feeling that pole position, might be nothing more than dumb luck.

So, here’s what I propose – Do what IndyCar does, and that’s split the initial group into 2. Formula E does this too because it would be impossible to have all 20 cars on track at the same time, so have two groups of 17 in Moto3, running in two 20-minute sessions with a 5-minute interval. You use no extra time in terms of weekend scheduling, you greatly minimize the risk of track congestion and you there’s a smaller chance of seeing silly slipstreaming tactics that have tainted Quali results for years now.

What’s the point of a Qualifying session if its near impossible to get clear air? 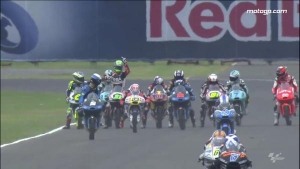 Seriously Romano? Okay, for those who didn’t see the Moto3 Warm-Up practise, Romano Fenati wasn’t happy with Niklas Ajo, so as a result, he went full “Jack Miller” and not only kicked his bike, but during the practise start, he lined up alongside Ajo’s KTM, and decided to switch it off, then take off.

A prime handcase of utter “handbags” from Fenati. As hilarious as it is, he was punished for his petulance with 3 penalty points on his license and a disqualification from Qualifying, meaning he had to start from the back. I would ask Romano if he thought it was worth it, but considering he finished 8th, and Ajo 10th, I think I already know the answer to that question.