And in the second part of my Double header for the weekend, I’m taking a look at the 2015 Grand Prix of Bahrain, as Lewis Hamilton continued his rampant charge for a third Championship in near perfect fashion, but had the surprising threat of Kimi Raikkonen as the Iceman scored his first podium in 27 races.

Further back, more on Sebastian Vettel as he suffered his first sloppy Ferrari drive, Nico Rosberg showed some fire for once, as well as half the Renaults (again), and a bunch of other stuff as we look back at a much quieter Bahrain GP! 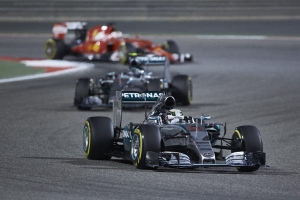 This was another example of Lewis Hamilton looking like he only had to drive at 70% in order to win. The most threat he was under, was at Turn 1. Beyond that, he was in complete control from start to finish. His teammate, Nico Rosberg was in the wars, and I’m glad Nico showed the gumption to attack after coming under attack from a pair of Ferrari undercuts from Sebastian Vettel, of which Nico had to respond on track, and did so in emphatic fashion. It was a hard-earned 3rd from Nico, who lost out at a chance to defend his 2nd from an attacking Kimi Raikkonen at the end as the team suffered a brake failure. If the race had gone on one lap longer, Hamilton would have been in real trouble…

My Driver of the Day has to be Kimi Raikkonen, who did a brilliant job of handling his tyres and making his aggressive 2-stopper work perfectly, catching Rosberg at the end with some great pace. This was his 7th Bahrain podium and his first in 27 races, dating back to the 2013 Korean GP, where he was still wearing black. He’s been owed a result like this after some rotten luck in recent rounds, and I’m glad he showed that Ferrari isn’t a one-man team any more, and that he can more than pick up the slack if Sebastian has an off-day, which he did. A shame Ferrari kept him out on the mediums just a little bit too long, if Ferrari were willing to gamble, I don’t think a win was completely out of the question.

For Seb, it was a rough day at the office. After an outrageous job to get on the front row with one of the laps of the season so far, multiple instances of running wide, one at the final corner forcing him to change his front wing, and taking away any chance at a podium, dropping him to 5th, being unable to pass Valterri Bottas’ Williams in what was a walking advert for ground effects aero in F1. For the second race running, we’ve had dirty air crop up as a potential humdinger in a race. But don’t worry guys, making the engines produce 1,000 bhp will solve the problem. Hmmm…

What annoys me about the state of play after four races, is that the race order at the top has been unbelievably predictable. Mercedes will win 9 times out of 10, and the media and many fans are hyping themselves into a tizz in hope (more than expectation) that Ferrari can upset the apple cart, but can only do so via alternate strategies as on raw pace, they’re still second best to the Silver Arrows. And Williams are a distant 3rd at present, Bottas finishing 42 seconds off the winning Hamilton. You can’t make up half a second overnight. My GP Predictor has never been simpler. Is that we really want as fans? Because as we head to Europe, I’m still not buying Ferrari as a consistent threat. Yet. 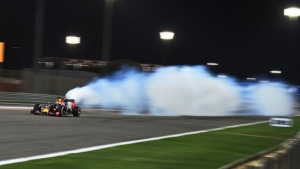 [/fusion_imageframe]The Midfield on the other hand…

Okay, this I admit, is a little bit more interesting. Now be honest with yourself – Could you seriously power rank teams 4-8 right now? I’m struggling, this was a real topsy-turvy race. Let me break it down for you here:

Red Bull – Ricciardo was solid as always in 6th, despite joining in with the Bahrain fireworks over the line, and Kyvat looked awful this weekend, but did well to fight back into the points in 9th. Probably the most available on the table given Massa had a damaged car and he too had to fight from the back.

Lotus – Maldonado was unlucky yet again to be shafted out of points, but Grosjean’s been in good form lately with back-to-back 7th places. It seriously looks like Lotus have found something now.

Toro Rosso – The in-form team with the hotshot drivers were all over the place. Sainz on the 5th row to start, Verstappen knocked out in Q2, and then a double DNF. They would never admit it, but the bigger brother team are grateful for this as they’ve been smacking them around so far this season.

Force India – Hulkenberg pulled off a blinder to get on Row 4 in Quali but lost out in the race, while Perez took a decent 8th place. This team is the definition of swinging on a dime at the moment.

Sauber – Can score points but neither was at their best today, despite a couple of flashy passes from Felipe “Fred” Nasr. And to be honest, I’m still not sure what Marcus Ericcson is bringing to the table, who’s 4-0 down to his Brazilian teammate. 12th and 14th isn’t terrible for Sauber but they could be doing better.

McLaren – Everyone on Twitter went nuts when Alonso finished 9th in Q1, and as much as I want to praise Alonso for matching their best result of the season in 11th, Jenson Button’s car didn’t even make the grid, with repeated electrical problems all weekend. Unacceptable. Even if Jenson’s punditry game on Twitter is STRONG.

So does anyone know what’s going on with the midfield? Because this is where “The Show” is at right now, and I’m not sure I’m keen on having to rely on the really messy midfield for the action. And to see Pastor fail. Because the man is cursed.

Overall, not a terrible race by any stretch, there was some strategic intensity up the front, and some decent wheel-to-wheel action at the midfield, but on the whole, a race that could have been so much more. And it’s kind of our own fault, given so many fans were balls deep in the Ferrari rhetoric, as well as thinking about last years race and the overrated classic its being remembered as. We got some issues here folks, and I don’t think the status quo is changing just yet.

Just remember – It says a lot about the state of the sport when Ferrari of all teams, is the underdog.