“Jorge Lorenzo tells the kids to get off his lawn.”

Hey folks, Dre here again, and I’m back to review Round 4 of the MotoGP Championship over at Jerez, and it was a weekend where the King of Jerez came to reclaim his throne, as Jorge Lorenzo dominated the weekend to take his 5th win at the circuit, leading from start to finish, ahead of an intelligent and disciplined Marc Marquez, with Valentino Rossi claiming his 200th GP podium.

Also, Jonas Folger proved the Qatar win was no fluke with a brilliant measured performance to claim his 2nd win of the Moto2 season, where Alex Rins’ dramatic dive-bomb attempted caused havoc on the final lap. And in Moto3, Danny Kent had to work hard to claim his 3rd consecutive win as he went to war with a resurgent Red Bull KTM attack, and a young Fabio Quartararo making a near-fatal error at the final corner. That and more as I talk about the Spanish Grand Prix! 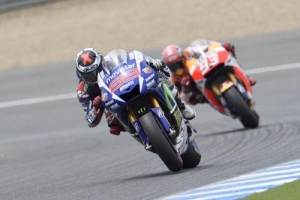 [/fusion_imageframe]Welcome back to Lorenzo Land

Fastest in all three practise sessions. Sets new Lap Record in Qualifying. Wins race by 5.5 seconds and leads every single lap in the process. That’s domination, and Jorge Lorenzo at his absolute best. He’s never the most entertaining rider to watch, but he’s smooth like butter, and on a track he’s comfortable at, where he can set the metronome spinning, he’s near impossible to beat. Jerez is the perfect track for a rider of his style, and he showed it once again here, Lorenzo winning his first race since Motegi of last year.

Further back, Marc Marquez did an excellent job to finish in 2nd, while under immense pain from his surgically repaired finger he suffered while dirtbiking last week. He was under pressure in the middle period of the race from Valentino Rossi, but he shredded his tyres in the process and Marquez was able to weather the storm, despite maybe suffering a bit of Deja Vu’ from Argentina.

As for Valentino himself, a quiet ride, never really on the same level as Marquez and Lorenzo, but he claimed his 200th Grand Prix podium in the process, a truly remarkable achievement that may never be beaten. And with Andrea Dovizioso only finishing in 9th after coming back from a gravel excursion, he now leads the Championship by 15 points, so in Rossi’s case – job done. His problem though, is going to be keeping up with Marquez and Lorenzo, who we both know can win nearly any given GP at their best.

Further back, some more solid performances from Cal Crutchlow in 4th, Pol Espargaro in 5th place, and his brother Aleix in 7th, in another good performance from Suzuki. If you catch the replay, see if you can get a glance at the midfield scrap between the Pramac Ducati’s, Redding, and the top open class runner in Hector Barbera. It was probably the highlight of an otherwise, lacklustre race. 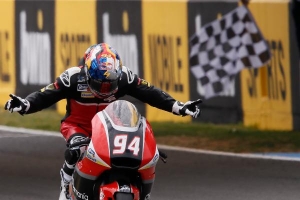 So, who thought Jonas Folger’s win at Qatar was a fluke? If you’re one of those people, think again. Folger had a career-making performance in a race where he had to deal with what looked like a resurgent Tito Rabat after qualifying on pole, looking like the Champion of 2014. But Rabat made one mistake in the middle period of the race and Folger was never to be seen after Rabat ran wide going down the hill towards the Sector 2 hairpin. And Rabat just had no answer afterwards.

The race was locked down by the end, but it was Alex Rins who was chasing down a fading Tito Rabat in the fight for 2nd, and in the end, tried a reckless dive-bomb attempt into the final hairpin, only for him to hit Rabat’s fairing and fall, crossing the line in 18th with a severely damaged bike. A silly mistake from the rookie, and one I’m sure he’ll learn from. It hurt Rabat too, as he was pushed wide for Johann Zarco to pass on the final straight, a brilliant ride from the Frenchman to take 2nd from 11th on the grid.

At this point, I’m still curious as to what’s happening with Tito Rabat, a very uncharacteristic performance from the reigning Champion, making mistakes, as well as fading towards the end of the race, an element of a Moto2 race that he’s normally brilliant at, given his speciality of longer runs in practise and qualifying. And what the heck happened to Sam Lowes limping out of the points? It’s like the Speed Up of 2014 returned for a second there… and no British fan wants that. 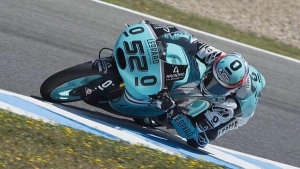 Okay, at this point, can anything stop Danny Kent? Another brilliant performance as Danny became the first British rider to win three consecutive races in any class since the great Barry Sheene in 1977. And this time he didn’t have it all his own way, having to really earn his win in a four-way scrap with himself, the two Red Bull KTM’s of Miguel Oliviera and Brad Binder who finished 2nd and 3rd respectively, and Fabio Quartararo in 4th, who tried the same dive-bomb Alex Rins did, but without the same problem of hitting the deck. The new 16 year old is a shrewd one, that’s for sure. Even if that was a bit silly.

So, with four rounds in the books, Danny Kent has a 31 point lead over his teammate Efren Vazquez. One, who in their wildest dreams could have ever predicted that? And two – If Kent can dominate from the front, as well as win the scrappy exchanges like in this race, who can stop him? It’s a unique skillset we just haven’t seen in Moto3 since its inception. Even if to be honest, I kinda wish Kent tones it down just a bit, because Moto3 is where the fun is, and dominance in said category is about as likely as rainfall in the Sahara.