Round 14 of the MotoGP World Championship heading back to Aragon, home to the race of the year through last season, and it was a weekend leading up to a massive battle between Jorge Lorenzo, desperate to claw back his 23 point Championship deficit and Marc Marquez trying to keep any small glimmer of hope at defending his title alive, along with chasing his 50th career win. Turns out we didn’t get it, but the entertainment came from an unlikely source… 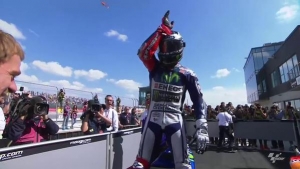 [/fusion_imageframe]As said, on paper, it was going to be Marquez vs Lorenzo. The Quali battle was insane, shattering lap records. The two of them looked way faster than anyone else. Then Lorenzo got the holeshot, Marquez tried too hard to bridge the early gap… and then it was over, as Marquez beached his bike on Lap 2.

Fair play to Marquez, he held his hands up and said it was his fault right away, clearly dejected with himself for making an unforced error like that. I feel bad for Marquez sometimes, because he’s just so spectacular that it’s so easy to forget that this is a 22 year old whose only done two and a half full seasons in the class. No-one’s been this good, and this raw, this fast. Once he rounds off the errors, how terrifying is this kid going to be?

As for Jorge, well, what can you say? When he’s up the front and away, he is unbeatable. Simple as that. His smoothness twinned with his speed is unlike anything I’ve seen, the polar opposite of Marc, and yet still so equally brilliant. It was a huge win for Jorge, one he had to take with just four rounds to go, and three of them being back-to-back weekends. The title race takes another swing.

This is the best Jorge I’ve ever seen. But has he left it too late? I ain’t even mad – His celebrations were AWESOME. Wish we got that more from Jorge. 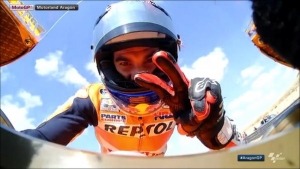 [/fusion_imageframe]Dani Pedrosa loves Aragon. And man did he show it was a brilliant 2nd, his best result of the season, and doing so in spectacular fashion with a sensational last lap battle with Valentino Rossi. It was old school, it was frantic, it was tense, it was everything great about MotoGP, and a sign that the fighter within Dani P was still there, it just lay dormant for a bit. Aragon brings the best out of 26, and it happened again here. If we as a society had half the fighting spirit that Pedrosa’s had, with setback, after setback, the world would be a better place.

As for Vale, I’m worried. This was the 2nd straight race weekend that he didn’t look in the same class as Jorge Lorenzo. And he can’t rely on rain every time. And as mentioned before, he gives himself too much work to do by constantly having to pass riders like Andrea Iannone who get in the way. This gives Lorenzo the opportunity to break out a 2-3 second advantage. And if that happens, it’s pretty much over.

Rossi needs front row starts, otherwise, he’s in trouble. He may also have to hope on Marquez interference to play a part too, because right now, I get the hunch that Aragon was the pattern, as opposed to the anomaly. 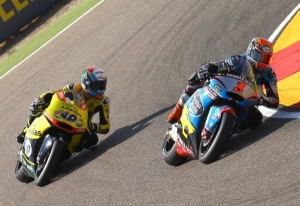 [/fusion_imageframe]About time Tito Rabat got another W, and this one was very well earned, in a superb fight with Alex Rins in what was a shortened Moto2 14 lap sprint race. And he and Alex Rins, were in another league to the rest of the field. It played out like an old Rossi feud, ironically. Rabat was in control from the start, but Rins pulled out two lap records right at the end to try and find a way through, but it was a defensive riding masterclass from Rabat that got him his 2nd win of the season.

I’m jealous of Sito Pons. You lose Maverick Vinales, but gain Alex Rins, who’s essentially, the same thing. The kid is special, he’s getting better by the race, and he WILL win more frequently when the chips are down in the future, just like at Indianapolis. He gets a 2nd season next year. I suspect he’ll be the prime contender to Zarco’s title defence.

Speaking of which, Zarco’s got to wait to break out the new shirts. He never looked like his usual dominant self this weekend, and it showed in the restart, his run of 12 consecutive podiums coming to an end, finishing in 6th place. I’ll be honest, I think Zarco will be happier to win it at Motegi, a track he loves, a track where he first won, and a country he loves, to the point where it’s a part of his racing helmet. He’s gotta wait, but somehow, I don’t think Johann will be losing any sleep over this one.

Miguel flourishes as the Contenders fall 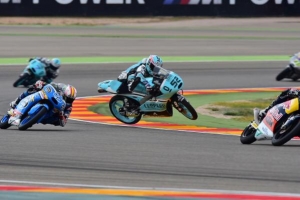 [/fusion_imageframe]Stop me if you’ve heard this one before, but yet another Moto3 classic. It’s the best consistent racing series in the world, period. And on this one, it was Miguel Oliveira who triumphed, but in a race with the most shocking finale of the season so far.

The top 3 had broken away on the final lap, the race was looking like it was coming down between Miguel, Brad Binder and Enea Bastianini. But a desperate lunge into the final chicane had Enea plough into Binder’s bike, causing them both to fall, just three corners from the finish. The race was Miguel’s, with Navarro a clear 2nd, and Danny Kent in 3rd, the big winner, all he had to do was cross the line… but he crashes on the final corner as he high sided the bike over the kerb, bottling what was set to be the title clinching podium. It’s still a good result as 55 in 4 rounds is a lot better than 55 in 5, but for Kent, it’ll be an opportunity that deep down, he’ll rue.

As for Enea, he’ll learn from his punishing mistake. Like I said with Marc, it’s easy to forget he is just 17, and learning when to pick your battles can be even more valuable than having raw speed, or enormous bollocks. A shame, as the Misano win had seemed to give him a bolt of confidence. Maybe this will give him a bolt of guidance.