I’m going to be honest with you people – Because of being at Brands Hatch yesterday, I didn’t get to see this one live, but my GOD, this was absolutely insane. With the MotoGP Championship delicately hanging in the balance, we witnessed the dream race that many people wanted. Three of the fastest riders in the sports history, and the future star of Andrea Iannone went to WAR for our entertainment, in a race that will go down in history as an all-time classic.

Oh and there was a big race in Moto3 as well, that’s probably also worth talking about.

I think my tweet last night summed this up better than anything I could write here:

Dre’s Belated Race Rating: ARE YOU FUCKING KIDDING ME/10. One of the greatest races I’ve ever, EVER seen. #MotoGP

We finally got a dream scenario, we’ve not seen for quite some time, and that was four factory riders going to war for a win. I think the most obvious combo of this was the two Yamaha’s and Honda’s, but instead of Dani Pedrosa, for everyone’s benefit, we got Andrea “Crazy Joe” Iannone. A man so ridiculous, he killed a seagull with a headbutt. Yep. 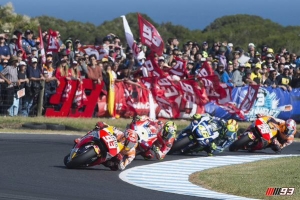 [/fusion_imageframe]But what I loved even more than this four way scrap, was the role that everyone was playing, like a story. Jorge Lorenzo was desperate to win, knowing he had no room to breathe in terms of the title race, and would so often try to pull away for the win.

Valentino Rossi was playing the damage limitation game, having looked second best all weekend, and even when he saw the golden carrot of Lorenzo, he couldn’t help but play the tactical game with Iannone, to his own detriment.

Andrea Iannone proved he really is fearless. There was 52 overtakes between the Top 4 over the course of this race. Iannone had 18 of them, including an astonishing double overtake of Rossi and Marquez into the downhill hairpin, nailed with absolute precision and confidence. His GP15 was a rocket ship, hitting 215mph down the front straight, and that provided a huge incentive to keep mixing it up with the Yamaha’s all race long, and he provided incredible entertainment. The best performance of The Maniac’s young career. 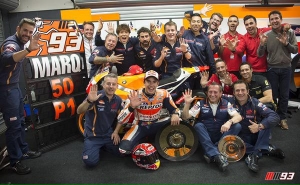 [/fusion_imageframe]But for the race winner, Marc Marquez – Nothing is more dangerous than a man who has nothing to lose. Just when Lorenzo looked like he was going to do the usual of running away with it, Marquez had the speed to reel him back in. And that final lap – A lap where Marquez started 3rd, a second behind Lorenzo, passed Iannone, closed in on Jorge through Sector 2, before passing him on the penultimate corner to win it… WHILE SETTING THE FASTEST LAP is without doubt, the lap of the year. Maybe the decade.

It’s becoming harder and harder to get surprised by anything Marc Marquez does, but this one takes the cake. It was over 24 hours ago and I still have NO IDEA how he did that. For me, I will always remember this as Marquez’s “Lap of the Gods”, and to do it at Phillip Island, a track he had never even finished at in the top class, it couldn’t have been sweeter, the perfect end to a perfect race.

Marc Marquez is still only 22. This was his 50th Grand Prix victory, tying him with Dani Pedrosa, who debuted seven years earlier. In just 130 races too, only the great Rossi and Agostini getting to that mark faster. And now he only needs a win at Motegi to have won at every track on the modern calendar. A nice reminder that Marc Marquez, is still Marc Marquez.

But seriously, whatever I say here, will not do this incredible race justice. Please, more than anything else, go out of your way to see it. We’ve been blessed with three classics this season already, and this was a fourth. If you’re a sports fan, and you weren’t captivated by that race, then you have no soul.

Also, before I move on – I have to give a mention to Maverick Vinales, a career high finish in 6th place, matching Dani Pedrosa the whole way, and finishing just six seconds off the win, and 14 ahead of his own teammate. The kid is an absolute superstar. And remember, that bike still has no seamless gearbox. Astonishing. 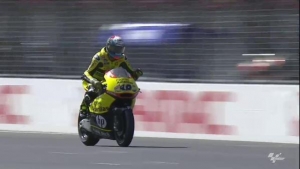 Gotta be honest, there really isn’t much to talk about here, it was a dominant performance from Alex Rins in Australia to take what was probably the easiest win of his GP career, leading almost from start to finish. He had a little bit of trouble at the start with Sam Lowes, but once he cleared
him, he was gone.

Make no mistake, Rins isn’t a superstar in the making. He’s a superstar now. Can’t wait to see how he copes with Zarco head-to-head next season, but this was a mature, disciplined ride, and if you were colourblind, you’d probably have thought Zarco was on that bike.

Also, it was a fantastic day for Forward Racing’s Lorenzo Baldassari, his first Moto2 podium in 3rd place. The former Red Bull Rookies Champion was arguably too tall for Moto3, so it’s nice to see him get his due, for himself, and for the Forward team, who we know, have struggled to keep their heads above water since their bosses tax evasion. 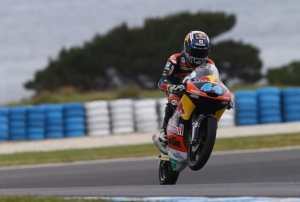 [/fusion_imageframe]Miguel Breaks The Narrative Of Kent

Stand up and be counted, Miguel Oliveira. His 4th win of the season and he did it in tremendous fashion, a beautifully orchestrated and controlled race from the front, in a big fight with Romano Fenati, Efren Vazquez and Brad Binder. It was another Phillip Island classic, even as much as ten laps in, we had 15 bikes in the leading pack, before incidents like Bagnaia dropping out and John McPhee stacking it from up the top, collecting Joan Mir in the process.

And after Danny Kent fell to 16th after being clipped by Bags in that preceding incident, in a desperate outside pass attempt through Turn 2, he clipped Niccolo Antonelli’s front wheel, and took a huge highside as a result, his bike collecting and crashing into Enea Bastianini’s Honda, taking him out too, and ending his Championship.

Now, Kent was very aggressive post-race about this, and while he was right to to be a bit peeved by Francisco’s lunge, the Antonelli crash was his fault, squeezing Niccolo to the inside, giving him nowhere to go. Given Kent’s pace was on the leader’s level, I had no idea why he felt the need to be so aggressive when the placed would have probably come to him at the hairpin 10 seconds later. 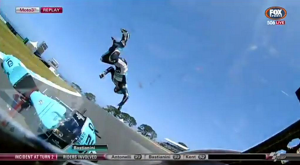 [/fusion_imageframe]The “I was taken out by two Italian’s – shock!” comment to Gavin Emmett post-race was completely classless and something I call “casual racism” – The kind of thing you’d say to your mates in hope of a laugh because they secretly agree with. Like: “Those Italians, always so aggressive, amirite?” I still believe he needs to calm down and apologize for such a crass and needless comment. It goes hand in hand with what I said about Kent being absolved from criticism because we’re about to have a British World Champion for the first time since 1977.

Sorry, but I just don’t work that way, I don’t drink the BT Sport kool-aid and follow the easy narratives. Kent’s been thoroughly mediocre since the Summer break and the two guys that have stolen the show in the class since then have been Miguel Oliveira and Niccolo Antonelli for me. Heck, even Jorge Navarro’s looked more impressive. Kent will win the title and he deserves it, but I’m not going to let the media piss on my head and call it rain. I’m just glad Miguel’s getting the coverage he deserves, he’s been tremendous all season long with KTM and if anyone thinks Kent’s going to push him over in Moto2 next season, I think they’ll be in for a surprise.