“…What? You think I got something poignant to say here after THAT race?”

Erm… Erm… Erm…Nope, I got nothing. Apparently it’s my hobby to review these GP’s and quite frankly, I have NO idea how I’m going to do that, after watching two of the craziest races you will EVER see!

A MotoGP race with only 14 finishers? You’d think it was 2009! Valentino Rossi must have hired Michael Bay to write his race-winning script, after striking up with another win on his 250th top class start, with Jorge Lorenzo limping home on an Extra Soft front tyre, Bradley Smith scoring his first ever MotoGP podium… And that was just the tip of an iceberg so big, it would make the Titanic shudder in fear.

Also, Maverick Vinales scored his 2nd win in three races, and Jack Miller gets mentioned. A lot. Here’s my (somehow) thoughts on Philip Island… Anyone got an aspirin? I need a Doctor… 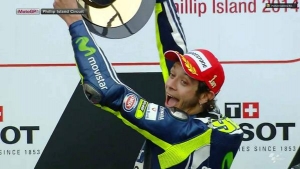 In what was one of the most ridiculous races you’ll ever see, it was the smooth as ever Valentino Rossi who won his 250th MotoGP top class race in fine style from 8th on the grid in an incredible performance given the circumstances. He pulled away from Jorge Lorenzo in what was a fight for 2nd due to Lorenzo’s fading Extra Soft tyre, and was comfortable from start to finish after race leader Marc Marquez crashed out as the track’s temperature dropped which wreaked havoc further back. Lorenzo essentially did what Rossi did at COTA back in April, go too hard on his front tyre too soon and had to nurse it over the line for the last 10 laps.

Can I have Rossi’s scriptwriter please? Because somehow, this man continues to stun the world, even at the age of 35, and he’s walking proof that sometimes, the experienced wise head can triumph… Even if it’s kind of a hollow victory because down the road, Marc Marquez was destroying both of them until his accident. But hey, you gotta be in it to win it right?

Also, I have to mention Bradley Smith finishing in 3rd, another truly gritty performance, and a guy that’s deserved a little bit of positive fortune. He’s had such a scruffy season, and has been called into question a lot this season, especially so with a World Champion as a teammate, but it only makes his maiden podium that much sweeter, and his emotion with Gavin Emmett in the post-race parc ferme interview showed just how much it meant to him. A wonderful moment for the guy, and I was very happy for him too.

Did you know, that this was the first all-Yamaha podium since Le Mans 2008? Back then, it was Rossi, Lorenzo and Colin Edwards! Now I feel old. Next… 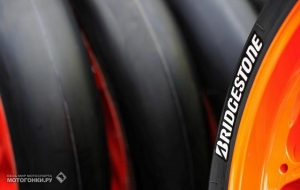 This is an interesting one, because the race had three runners in the Top 5 at some point, who all hit the deck under braking with a new Asymmetric soft compound tyre, where around 30% of the compound was harder. Did it work? No. Riders were dropping all through practise, and in the race it nailed Marc Marquez who was in a dominant position upfront, Pol Espargaro with about 3 laps to go in the chase, and Cal Crutchlow who somehow, was in a comfortable 2nd place on the final lap.

This now marks the 2nd straight year Bridgestone have made a miscalculation regarding their tyres and Philip Island, after last year’s track surface fiasco and their lack of testing. And while I praise Bridgestone to a degree for trying something different and out of left field to find a solution, it really didn’t work, and if three riders are having near identical accident under braking on the same compound, questions need to be asked. I mean sure, it made the race more chaotic, and as a result, entertainment, but not really for the best of reasons. 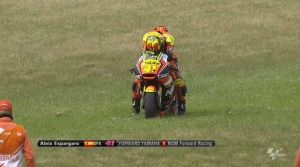 [/fusion_imageframe]The Opposite Sides of Lady Luck

Obviously my thoughts go out to the Soft tyre affected crashers in Marquez, Espargaro and especially Cal Crutchlow, who were all superb today until the track temperature fell, but also, Dani Pedrosa may have had the weekend from hell. Had to burn more tyres by running in QP1 after being 11st fastest in practise, then in the race, is stuck in the 2nd pack, until forced to retirement by a clumsy Iannone hitting him after the “Stoner” corner. And with that, Pedrosa’s chances of 2nd in the Championship are slim at best. A weekend to forget for Repsol Honda, Marquez’s championship sandwiched by two really miserable weekend, with Yamaha winning their 4th straight. The plus though, is Honda looked back on form race pace wise, until Marquez’s crash.

Then you have Cal, who was on course to match his Career best in 2nd until he lost it. Would have been Ducati’s best result since 2010 as well. The Espargaro brothers had it rotten too, not only with Pol’s drop, but also with Aleix in 4th place until a damaged front windshield ruined his already poor speed, only then for Stefan Bradl to enter the hairpin about 20mph too hot and then smash into the back of him. Indianapolis anyone?

But on the other end, look who it helped out – Hector Barbera with a career high 5th place finish, the highest ever for the Avintia team, who are probably getting crunk as we speak. Scott Redding matched his career high as well in 7th place, and was only about 300 yards shy of being the highest Honda finisher. PERIOD. A nice 6th place for Alvaro Bautista as well, celebrating his 200th GP start. 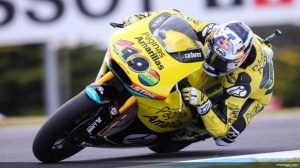 He’s in sensational form right now, Maverick Vinales took his 3rd win of the season and his 2nd in the last 3 rounds with a dominant and classy victory, once again, just being a cut above the rest of the leading pack when it counted.

Part of the problem for the rest was that the Marc VDS boys never looked truly comfortable out there, both of them making multiple mistakes during the course of the race, and it let Thomas Luthi continue his run of form by finishing in 2nd, Rabat coming home in 3rd, putting one hand on the title with a 41 point lead, with just 50 left on the table.

Mika Kallio went straight back to the Motorhome in an angry huff after finishing in 4th, clearly upset with something. As Keith Huewen pointed out: “That’s about as much of an angry rant as you’ll get out of a Finn!”

Also, a brilliant ride from Sam Lowes on the Speed Up bike to have his best Moto2 finish to date in 5th. He’s having to work 2x as hard given the Speed Up bike is far from the best, but he’s been overdue a result like that. Also, props to Marcel Schrotter finishing in 7th for Tech 3, the team’s best result of the season, and individually for the German. 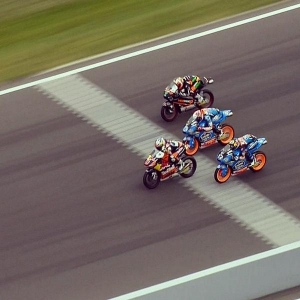 And the award for the race of the year goes to Moto3’s Australian GP of 2014. THIS. WAS. INSANE. a leading back of 11 bikes up the front, including Miller, both Alex’s, Binder, Kent, McPhee, Vazquez, Fenati and Masbou!

I’ll be honest, I thought Miller’s head had gone after his botched Qualifying in 8th place, and the fact his KTM kept getting swallowed up in the draft, but his final lap defending was the best defensive riding you’ll see this season. He did not put a wheel, a single inch offline, and his braking all race was superb. This was a race Jack Miller absolutely HAD to win, and he did.

A shame for him that he only took 5 points out of Marquez’s 25 point lead, but he could do no more there, it was a truly exceptional performance. The Top 6 in the field separated by just 0.242 of a second with Marquez, Rins, Vazquez, McPhee and Masbou all over the line together.

There was a lot of bitchiness post-race though. Miller had collided with Danny Kent during the race and took him and Brad Binder out on the final lap, Kent was PISSED afterwards, the Chippenham lad essentially saying that he was racing on Team Orders to help Miller out and felt cheated in the way Miller had replayed him. It’s certainly a confusing situation with the Ajo division inda half hinting that they wanted Kent to play as rear gunner, but not really. And now, Kent’s made it clear he’s in it for himself, and that’s bad news for Jack, because Kent is riding very, very well right now, and he’s the kinda guy you’d rather race with, rather than against.

And then you had Efren Vazquez blaming John McPhee, his own teammate, for “costing him a shot at the win” with McPhee trying to pass him, which he had every right in doing. Meow.

Sepang just got a lot more interesting, with Marquez still holding a 20 point lead in the Championship, a win in Kuala Lumpur will seal it. Wonder if Rins will help him o- HAHAHAHAHA, no.