“A step back as Codemaster’s F1’s department prepares for the future.”

Hey folks, Dre here, and it’s time to review that difficult fifth album for Codemasters, and the F1 franchise, with F1 2014 for the Xbox 360, PS3 and PC. With next-gen consoles now among us, and with F1 2015 already confirmed for next year, the feeling in the air is that this game is nothing more than a placeholder to tide us over until next year. While that’s a harsh assumption, there is some validity to this sentiment, and in the course of this review, I’ll explain why.

First up, let’s break down the graphics and presentation. Graphically, the game looks… pretty similar to last year, really. The two new tracks in Austria and Sochi in Russia though, are well rendered and fit in with the rest of the franchise well. Bahrain at night looks great with the fireworks too though, even if you’ll be creeped out by the 11,000,000 floodlights around the track now. On the whole though, I suspect Codemasters has taken this graphical engine about as far as they can possibly take it. 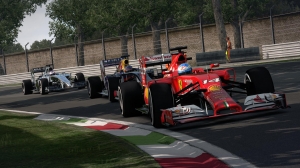 [/fusion_imageframe]So, how about the game’s presentation? Well, those expecting a throwback to the 2010 and 2011 days, prepare to be disappointed. Besides a small colour tweak, and the background image now being Turns 1 and 2 at Bahrain, the games presentation is practically identical to last year, even down to the menu style. It makes you sigh at how uninspiring it is. Where’s the new game feel here that makes us actually WANT to play?

Another visual detail worth pointing out is the new steering wheels. To update with the times, many cars now have big LCD monitors on them, and Codies has implemented that with the cars this year, and it actually provides some helpful info on engine/tyre temperature. So nice touch there, but it’s not accurate with Williams (They switched to the butterfly wheel but have the old one still), and through no fault of their own, cars like Red Bull, Williams and Force India are automatically at a disadvantage, a shame, but not entirely Codies fault.The camera angles like the T-Cam and the cockpit cam are still very good.

So, onto the gameplay itself? How does the new “refined” handling model feel for F1 2014? Well, you have to take into account that I’m a pad user, so I like to think I’m in the majority of people who actually buy the game. And I’m pleased to report, the handling model, I enjoy. It’s certainly different and fits the bill for what the new 2014 F1 cars are bringing to the table on the real tracks themselves. 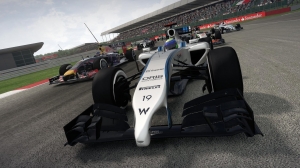 [/fusion_imageframe]The cars have a lot more torque, so without the assists, the cars are much more twitchy at the rear, less downforce means that you have to be more careful through medium and high speed corners, and you have a fair bit more oversteer because of the massively increased torque over the wide power band. It works, and once I got used to it, it was very rewarding and a fun and refreshing change compared to last year. And cars still have different characteristic feels, such as Mercedes being the overall best, while Red Bull still have great cornering grip and downforce, but poor top speed, while Williams are the fastest in a straight line. You can feel the difference and that’s a great positive. And as much as a big deal has been made over the sound and the sound changes in real life, and the translation into video games, I think Codies have done a pretty good job of capturing the throaty whine that these new hybrid cars produce.

But for every positive, there’s sadly some negatives. The AI, a constant source of disappointment, is largely the same as last year. They’re still unpredictable in terms of racing lines when defending, they’re still hesitant to engage in passing attempts and very easy to defend against, even in slower cars, a common trait of F1 games from them very beginning.

Codies implementation of corner cutting penalties are still really inconsistent, for instance, Ascari you still can cut like mad and get away with it, and the anti-cut kerb added does nothing to unsettle the car. But Turn 1 at Australia is still a minefield. These are fundamental problems with the game that after 5 years, have still yet to be addressed, and that is completely unacceptable.

There’s also been massive reported disparities between performance and ability on pad, compared to wheel, with wheel users getting shafted on the new handling model. Beating the Legend AI in the rain? According to Knut Martinsen, AOR League Runner, it’s “practically impossible” and that’s not a good look. If you’re going to have wheel support, you have to make it as fair as possible, no-one should have to spend £40 on a game, wants to race hard, but then gets screwed on competition by pad runners. A shame as the divide was much smaller last year. 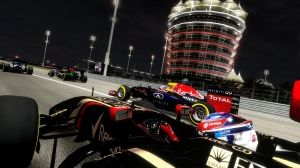 [/fusion_imageframe]So what else does 2014 bring to the table? Gone is the “Young Driver Test” from previous years and in its place, a simple “Evaluation Test”, a 1 lap race around Monza where the game gets an idea and suggests a difficulty level for you. See, this a key part of F1 2014’s marketing, it’s accessibility. The refined pad handling, and the new “Very Easy” difficulty to make this years game as easy to get used to as possible for new players. I mean shit, they plug the test on the box, like that’s a key feature. Welp. It does its job adequately enough, but you’ll never need it again afterwards. It’s a bit cringey that a 2-minute, one off lap is an advertised feature in the game.

For the Career Section, Season Challenge is virtually identical to last year, and Career Mode is largely unchanged. A shame with the near one gearbox setting rule, you can’t set your map before you start the year, but overall, it is what it is. A lot of it’s still down to taking advantage of the AI’s weaker opening half lap, then defending like hell when they get faster, on the more challenging difficulties.

And because the cars upgrade themselves over the course of the season, it’s not the most motivating to play, because the full version of the cars are essentially what you drive in GP mode anyway. A nice feature though, is now getting the choice of having either a 7, 12 or full 19 race season, encouraging more speedy players to climb the ladder a little faster, because Career Mode, can be a grind. Also, you can choose any team in the game to start off with, a nice touch, as being stuck with the lower down teams, while more realistic, just isn’t as fun. A shame though that you can’t choose your teammate off the bat, because would you REALLY want Massa over Bottas?

Scenario Mode too is largely similar to last year, and you have Time Attack and Time Trial to round off the offline features. Nothing new there. 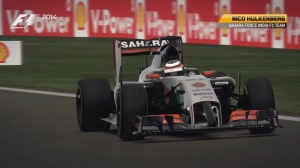 [/fusion_imageframe]So what about Online play? Again, the main modes are the same, if you’re not in Private lobbies, you’re sprinting in up to 16 player lobbies. Unfortunately though, Online still has many of the same problems in previous years games too, testing already confirming that the netcode still has lag issues, and the infamous “sidepod” glitch is still a thing too. And if the disparities between pad and wheel play is confirmed to be true, it will hurt the online activity and competitive league racing, something the game has become famous for.

So, what do I think of the game overall? Disappointed. F1 2014 is not a bad experience at all. At its the core, the game is still enjoyable, and the handling model does work well here. The problem is, the package it’s surrounded by is bland, repetitive and dull. Removing the Classic Content from F1 2013 means you’re actually getting LESS for your £40-50 here. That alone is a cardinal error. And if you take the handling models away, you essentially have a game practically identical to last year, and unless you’re a competitive player, or someone who likes racking up the laps, you haven’t got a lot really to keep you busy.

The emphasis of the game was about “accessibility”. The problem with that, is Codemasters will risk alienating their current, hardcore audience that keeps the sales up, and that’s always a risky bit of business. What F1 2014 is, is proof that the franchise is running out of steam and can’t really go further from here. The core is great, but the package makes it a worse complete video game than what we had last year.

I recommend you rent the game, and see if the driving itself is worth the investment. Me personally, I cannot recommend dropping £40 into this if you’re a regular/hardcore player on the fence. If you’ve taken a break and feel like hopping back in, this may be worth a look, but overall, this may be the weakest game in the franchise to date, and I really hope the Codemasters team are working hard on next year’s next-gen upgrade, because what we have here, after 5 years of tweaks and subtle changes, “Decent” just simply isn’t good enough anymore.