“Just when you thought we could stop talking about Pirelli…”

Well, the crazy train of Formula 1 returned after its month long summer break by heading to Spa Francorchamps, and it was another race where Lewis Hamilton looked near-impervious, but the weekend was dominated by Pirelli, with another disastrous weekend as Nico Rosberg suffered a puncture in Free Practise, whereas Sebastian Vettel suffered one on the penultimate lap that cost him a podium finish, and got everyone talking again. If had “Bitch about Pirelli” on your F1 bingo sheet of things to talk about over the 2015 season, you’re in luck, because he we go again… 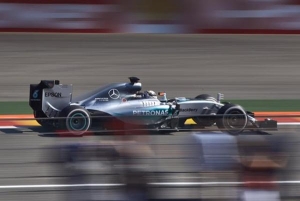 It was never really in doubt was it? Right from Turn 1, the new start procedures had a nasty effect as Sergio Perez briefly lead, and Nico Rosberg dropped to P6. By the time he cleared the traffic, the race was already effectively done and Rosberg just didn’t have an answer for Hamilton’s pace during the second half. An all-too familiar tale.

Hamilton now has a 28 point championship lead, meaning a one-race advantage of Rosberg, with 8 rounds to go. And the signs aren’t good for Nico either, given that this time last year, post-Spa, Lewis won 6 of the last 7 rounds to cement the title. Last year, Rosberg’s greatest weapon was his qualifying pace. He no longer has that, with Lewis winning that Pole Trophy paperweight after slaughtering the field the previous day. With that gone, where does Nico win this Championship? Anyone wanna tell me? Because Mercs haven’t put a foot wrong in terms of reliability either… 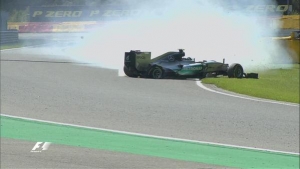 Like I said, it just isn’t an F1 season without some discussion about Pirelli and its tyres. First, Nico Rosberg suffered one in Free Practise, heading towards Blanchimont at 160mph, SOMEHOW managing to avoid the outside wall and no real harm done besides Nico’s pristine white overalls. There was me hoping that this was a one-off. Ha.

Sebastian Vettel had recovered well from his poor 8th place grid slot to be on course for 3rd or 4th, in a fight with Romain Grosjean, but with just under 2 laps to go, he ran slightly over the curve at Radillion and as a result, his tyre delaminated and exploded, costing Seb a spot in the points for the first time this season. A rough way to end Ferrari’s 900th race.

Of course, this was a situation where Ferrari and Pirelli wanted to blame the other. Pirelli had claimed that Ferrari had pushed their one-stopper to the limit and the tyre going was a natural consequence. Ferrari argued their data was correct and the one-stopper was fine. So, of course, it’s natural in F1 to play the blame game – So who’s fault was it?

Now before anyone tries this, while I may be a Sebastian Vettel fan (Who was rightly pissed at the end of the race), I can shut that part of my brain off when I’m writing. Here’s my take – This wasn’t on Ferrari. But there’s not enough on the table to say it’s on Pirelli either in my opinion. Given Sebastian’s lap-times, he didn’t look like he was suffering too bad on those 28 lap old tyres, holding Grosjean at bay. According to F1 Insider, many teams have claimed Pirelli told them the tyre could do 30 laps. Vettel claimed 40. I doubt Ferrari would make such a massive error in terms of strategy and even if Grosjean had come through, Vettel would have most likely finished 4th.

It’s impossible to say for sure if this was on Pirelli. A lot of more cynically minded fans have said that because Vettel kept cutting Raidillon, it caused the puncture. I’m sorry, since when does driving over kerbs cause punctures? Am I missing something? Since when could a kerb puncture rubber? I don’t buy it.

And, nearly 36 hours since Vettel’s blowout, and nearly 4 days since Rosberg’s puncture at the time of writing, we still don’t know what caused Rosberg’s blowout. Not to mention, Pirelli put out a very strange statement regarding a proposal from November 2013 where they suggested that the Prime tyres never do more than 50% race distance, their logic being that the tyre involved should never have been able to do more than 22 laps, and that the FIA had turned that statement down. Bizarre.

I do agree that Sebastian over-reacted to a degree, but having suffered a blowout at 200mph down the Kemmel straight, who wouldn’t be a bit tense?! As Seb himself said: “If that blowout happens 300m earlier, I wouldn’t be standing here talking to you about it.”

Now, I’m not saying Vettel’s some kind of hero here, talking about the tyres, but someone’s got to take some responsibility for what was a very bizarre weekend of events, and I refuse to believe that Ferrari “just gambled and got it wrong”, Chris Harris, I’m looking at you. I mean, let’s be real here, it wouldn’t be the first time Pirelli got it wrong with tyres. Anyone remember Silverstone 2013?

It was a good day for the midfield here, many benefitting from the attrition rate of some of the top runners. Obviously, Vettel dropped out of the points, Daniel Ricciardo had yet another electrical problem, Valtteri Bottas’ pit crew got the wrong tyre out of the blanket, and Kimi Raikkonen was down the order – The biggest winner being Romain Grosjean, a tremendous performance from the Frenchman as he finished 3rd, his first podium since Austin 2013. A well earned prize of dedication after the last season and a half of Lotus’ related struggles.

Danill Kyvat finished 4th after another strong day at the office, and look at Sergio Perez, he’s always due for one big performance a year, and this one was his moment. Surprised he didn’t cash that one in at Spa, as he scored a Top 5, as his teammate Nico Hulkenberg’s race never really got started.

Oh and as much as Spa was mediocre as a race, this alone was worth an extra point:

…Say what you will, that kid is FEARLESS. And none of you give me any of that shit about track extending.