It’s the most, wonderful time of the year – Not Christmas, but around Silverstone when the inevitable rumours kick up about who’s going where for the following year. Or as I like to call it: “How F1 journalists get a paycheck when the news runs out over Summer”. Because it’s either that, or reporting on Lewis Hamilton trying to be Chris Gayle in Barbados.

Many people in F1 had speculated over the future of Ferrari’s 2nd car as Kimi Raikkonen continued to be thoroughly mediocre as the season’s gone on. The rumours of Valtteri Bottas and Nico Hulkenberg hovering around like sharks was there too. But that all came to an end yesterday as Ferrari announced that Kimi Raikkonen would be staying with the team for another year, retaining their 2015 lineup.

This decision drew a surprisingly large amount of criticism from many fans and journalists alike. So, I’ve decided to split my vibrant personality in two, and debate with myself the pros and cons of Raikkonen in this stage of their career. What do I make of it all, and how does this affect the rest of the grid? Here’s my full thoughts:

Fun fact, Ferrari have only had six different full-time drivers since the turn of the century. This is a team that clearly likes to take their time and build a base on for the future. You can get away with swapping out drivers a lot when you’re in the midfield, where changes are more frequent and experimentation is often rewarded in the long-run, but starting over with someone new with Ferrari, isn’t something that happens very often. Not to mention, Sebastian Vettel and Kimi Raikkonen get along incredibly well, and are good friends. Raikkonen is driving like a #2 at the moment, and that makes life easier for Ferrari in general, a team that likes to employ that 1-2 strategy.

Stability is one thing Kimi definitely has going for him. This would be his 5th season with the team, if you include his first run with them back in 2007, and after already clearing out Fernando Alonso last season, do you really wanna upset the apple-cart in back-to-back years? Especially when you have working relations with Kimi inside already, like former Lotus technical director, James Allison? Last time Ferrari did that? 1990. Ironically, they also finished 2nd that year.

Okay, there’s no getting around it here, Raikkonen is 84 points behind Sebastian Vettel. I’m not sure how much of that is down to Vettel just being that good this season, but whatever way you slice it, it’s not a good look for a guy who’s on £15m+ a season. This is a trend carrying on from last year, where he was beaten rather handily by Fernando Alonso, by 106.

Ever since he debuted for Ferrari, he’s been top Ferrari in qualifying 5 out 29 times, and been best in the race just 3 times out of 24 occasions where both Ferrari’s finished. If this was a midfield team, I’d find it incredibly hard to justify Raikkonen’s continued employment. Heck, we gave Felipe Massa a much harder time over his performances for Ferrari, when he was the obedient #2 player who pretty much bent over and pulled his trousers down for ol’ Nando.

We all know, Ferrari are going to want to aim for the 2016 Constructor’s title. Is Raikkonen going to give Rosberg a run for his money if the car is competitive, because that’s going to become a problem. In any case, Rosberg can stack up points consistently over a season, and will make little mistakes. Something I’m not sure I can say about Kimi, who span in Canada and struggled in the rain at Silverstone. However…

Gotta give him this one – He’s had the Lion’s share of the bad luck this season. In Australia, he had a bad pit stop that ended his race. In Malaysia, he had a tyre punctured by Felipe Nasr. In Hungary, he suffered a power unit failure from 2nd place. These incidents have cost Kimi something in the region of 25-35 points, and if he had those, he’d probably be around the 100-110 mark, comfortably ahead of the Williams sandwich he’s currently in. He’d still be a good chunk behind Seb, but as an accidental #2, that’s probably okay. 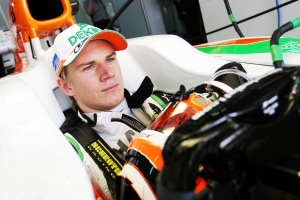 [/fusion_imageframe]+/- The alternatives have problems too

Well, if Kimi was to go, who do you bring in? In one corner, you have Valtteri Bottas. First of all, you’d need to buy him out of his Williams contract, and I hear that’s over £10m in compensation. You have to wonder if that’s worth the investment, especially given Bottas’ 2015 in context, hasn’t been as good as last year. He’s struggled to match Felipe Massa, who Ferrari deemed his services to be no longer required, just 15 months ago. If he can’t match him, what’s the point?

Then there’s Nico Hulkenberg. On paper, outstanding. Glittering resume, and done a super job given the poor hands he’s been dealt with since he got into F1 in 2009. The problem is, he lacks the “proof of concept” that others have had around him. Bottas had 6 podiums last year. Romain Grosjean looked like a new man in 2013 when he was told he was going to be “the man” at Lotus, and challenged for wins. Daniel Ricciardo, obviously had 3 wins last season. Heck, even Sergio Perez drew more attention in 2012 when Sauber had raw potential. Nico’s never had that kind of run, and he’s never the go-to option, and that’s why he’s never had that top seat so many thinks he deserves.

And of course, there is the obvious risk mentioned earlier in just bringing in someone else.

So, on the whole, was Ferrari right to keep Kimi? For me? I think investing in a younger talent for the future and having two competitive drivers is the way forward, like Mercedes currently have. I mean, Kimi’s 36 in two months time, how much longer are we really talking here before the wheels fall off? Hulk just turned 28, and Bottas is only a year or so younger. But, I think many F1 fans (me included) have exaggerated Kimi’s plight and for now, there’s no real reason to change just yet. Maybe next year will be a better barometer of where Ferrari stands.

And what does this mean for the others? I don’t think this will affect Bottas too much. Williams is as good a seat as he can expect to get for now, and it’ll be his team when Massa decides to move on, which could be sooner rather than later, given his Petrobras affiliation and Williams tendency to go with pay drivers.

As for Nico Hulkenberg, this is like a really hot girl telling him: “I think we’re better off as friends.” Yet another missed opportunity. Poor guy, just 2 years to the weekend since Ferrari decided to hire Raikkonen and tell him no… via text message.

For me, he needs to get out of Force India. Nothing good has ever come out of anyone driving for them. It’s a dead end job, with nothing good on the horizon. Haas might be the gamble he needs. Haas will probably struggle early on, but if the level of investment is high enough, he could leapfrog some other midfield teams as time goes on. And with Haas operating under Ferrari supervision, maybe that could be the open door he needs. You have to wonder though, just who did he kill in a previous life to deserve such wretched luck?[/fusion_builder_column][/fusion_builder_row][/fusion_builder_container]