Sebastian Vettel insulting Charlie Whiting at the climax of the Mexican Grand Prix was one of the highlights of the season, but also exposed the lack of humanity in a sport that so desperately needs it.

“Formula 1 Grid, this is Davina. Please, do not swear.”

Lap 68 of the Mexican Grand Prix. Under pressure from Sebastian Vettel; Max Verstappen cracks – He runs wide at Turn 1 braking from 220mph, cutting the Turn 2 left-hander before rejoining the track, keeping his 3rd position.

Red Bull suggest Max give the position back, but ultimately hold firm. Vettel on the other hand, snaps. He calls Verstappen a “bastard”, and tells Race Director Charlie Whiting to “fuck off”.

Those three laps were arguably the most controversial of the entire season, but maybe not for the reasons expected. Forget the subsequent penalties to Max and Seb, it was the remarks on the radio that ground the gears of the Internet audience.

It’s like Twitter had turned into a Daily Mail comment section. People were even more angry about this than Vettel’s rant in the first place. But the funny thing about it is, this has been the culmination of F1’s biggest recent self-fulfilling prophecies. We made Vettel the “radio star”, made blue flag songs on YouTube, and embraced him as the whiny backmarker guy… And now, he’s the embodiment of everything we now hate about F1’s terrible stewarding. More on that in a future episode. 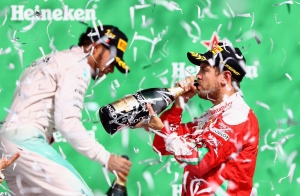 Now, let me make one thing absolutely clear here – I do NOT condone Vettel’s outburst. No matter how angry you are, telling Charlie to F-Off is hardly going to help anything. However, what’s amazing, is that in a sport where we dig so deep for human elements in a world of technology, we took the human element out of the sport, to make an example of Seb. And that I think is crazy.

Have we forgotten what we’re dealing with here? Have we taken the sport for granted through our complacency as armchair fans? We’re talking about 22 of the world’s finest racing drivers, driving cars with 900 horsepower, driving at over 200 miles per hour and in a sport where being a thousandth of a second out can ruin your hard work over the last three days. And yet, we call drivers crybabies when things don’t go their way… Are you kidding me?

We’re human beings. And if you’re genuinely watching this and you’ve never said anything you’ve later regretted, then I’m sorry, I think you’re a damn liar. We all say things in the heat of the moment. That’s an emotional weakness for many of us in everyday life. Ridiculously talented athletes are no different, and I think sometimes, we need to be reminded of that.

And look at the other side of the coin. Formula 1 has a driver right at the top of the industry who NEVER swears, polite, classy, is brilliant to their fans and great at handling the media… And he often gets labelled as being too boring for the top level of the sport. And his name is Nico Rosberg. See, you can’t win if you try here. We want excitement, genuine reactions and feelings and not the easily labelled “PR boredom”, and yet when we get it, we often criticise that too. Dammed if you do, damned if you don’t.

What also doesn’t help, is the character we’ve turned Sebastian Vettel into. 2013 wasn’t all that long ago – The time where he won 13 races in a season en route to consecutive title #4, and we were desperate to find reasons to dislike him. We turned Mark Webber into a sympathetic wrestling babyface, hated the fact he dyed his hair blonde, and of course, Multi 21, where Seb actively broke the team orders trend that we as fans apparently hate. Even with 2015 and the redemption year where we embraced Vettel’s humour and charisma during press conferences, that’s quickly gone away here due to the team being far worse than last year. 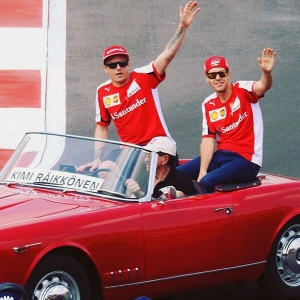 Ask yourself this – If established internet cult hero Kimi Raikkonen had made these remarks, would we be calling for his proverbial head? Kimi has such little character or personality, we basically gave him one on the Internet for him. And remember, this is the guy who once shoved a cameraman over for pretty much no reason. He’s not this amazing man the Internet wants him to be.

Now, Vettel didn’t get punished for his outburst, but Jean Todt promised a charge for a future offence. Yet the FIA couldn’t help but milk a good sound byte out of him and publish it for the world to see. Oh.

I’m glad Sebastian apologised for his remarks. The right thing to do. A line here was definitely crossed. He admitted he said it in the heat of the moment and that he was wrong. Unlike certain Dutch teenagers, he handles himself with a level of maturity and respect outside of the car. But we as fans also need to accept that we’re not watching a children’s TV show. There’s no Shadow Realms here. This is a live sport. These are grown adults, and they don’t care whether your 10-year-old is offended by their reactionary thoughts after being cheated on in a race. And if your kid is that easily distracted by that, then it’s probably more down to bad parenting, but that’s a discussion for another day.

Formula 1 is a sport that is crying out for greater humanising moments. Outside of Lewis appearing on Ellen, or Daniel Ricciardo making people drink out of his shoe, we lack those moments we can relate to. Sunday was the day that Sebastian Vettel, one of the sport’s finest recent ambassadors, rightly lost his shit. And I loved him for that. I too wear my heart on my sleeve, and that would be the hill I’d always die on if it came down to it. Let’s never forget, that these people are adults too, like you and I and understanding their perspective will only make us more tolerant as fans.

Let’s put a little bit of humanity and empathy back into this cold, ruthless sport. Trust me, the last thing I’d want, is Sky Sports producers to try and do it for us.