Tito Rabat: Fighting Against The Tide

“One of GP’s great grinders, is at risk.”

Esteve “Tito” Rabat, the third member of the famous Rufea Gang, the trio that swept the 2014 set of Championships, alongside the Marquez brothers. The greatest Intermediate class title ever won by Tito was astonishing last season – 346 points, 7 victories, 14 podiums, and only 1 result lower than 4th as he was the only man to complete every single racing lap in what was a stacked field, a resurgent Mika Kallio and a stunning rookie campaign from the promoted Moto3 Champion, Maverick Vinales. But this incredible season has been sandwiched by two others that tell a different story, and why Tito Rabat’s career might hit an imminent roadblock. 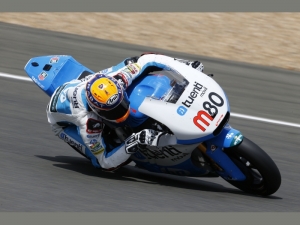 [/fusion_imageframe]2013 was a season where Rabat took that next level, from Top 10 runner in the midfield, to bonafide top-tier player in the class. He took his first career victory in Jerez of that season, and would win twice more en route to finishing 3rd in the Championship. Any other year, that would be an amazing season. But the unfortunate reality was, he finished behind his teammate that season in Pol Espargaro, the Champion that season, and Scott Redding, who you could argue, was equally worthy, as they both went on to the top class, and have both since validated their spots with exceptional rookie seasons. It’s a harsh way of looking at it, but people like me and other team bosses are going to look at Tito and think, “Has he really improved from the guy who lost to Pol on the same bike by 50 points?”

This is doubled up by what we’ve seen in this current, 2015 season. A season where Rabat’s been a little unlucky, with Simone Corsi, being Corsi in Qatar, but also a campaign where Rabat has struggled to get to grips with the 2015 Kalex chassis as Johann Zarco has fully capitalized on the change from Suter to Kalex, something that the other big hitting Suter riders of 2014; Dominique Aegerter and Thomas Luthi have struggled to do, where Zarco has flourished, winning three races already this season, backflipping his way to a 45 point championship lead as we approach the Sachsenring, the halfway point in the season.

Rabat’s ultra-consistent style is still here, he’s enjoyed a run of five consecutive podiums, but just the one win in that stretch, and being beaten head-to-head by two incredibly intelligent rides by Zarco in the last two rounds, has to be a body blow to the man’s confidence, and chances of retaining the title are looking slimmer by the race, as Zarco looks near bulletproof and now Rabat has to nurse a broken collarbone sustained in a training accident this past week. You could argue that Zarco’s “out-Titoing” Tito at the moment, something I didn’t was possible given what we all saw of him in 2014.

I have tremendous respect for Tito. He’s already in his 10th full season as a GP bike rider, and has had to shake off the status of being a “pay rider”, with the 2014 season being his first where he didn’t have to pay for his ride, and it was clearly a season that brought him out of that 2013 shadow. But that experience might now start to count against him. He’s already taken part in over 150 GP’s, and he just turned 26 years of age. He’s a guy who’s had to grind his way to the top, but has been beaten by riders on his level before, and now trying to get a seat worth maintaining in MotoGP, a stacked environment where the best field ever in 2014 has somehow gotten even better with the additions of Maverick Vinales, Loris Baz and Eugene Laverty to shake things up with the experienced names in the Open Class. 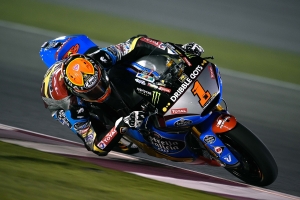 [/fusion_imageframe]And with other great young talent that teams would love to have at the top like Alex Rins, the ever improving Sam Lowes, and maybe even Rabat’s own teammate in Alex Marquez, who seems to be getting better by the race, you have to wonder, is Rabat the “sexy” pick? Do you want the experience, or the exciting young prospect who might blossom into a top-tier star, like we’re seeing with Maverick, Pol Espargaro, or Andrea Iannone?

You also have to wonder, was staying in Moto2 to retain his title, something that’s never been done before, a right call? On one end, with the bikes dramatically changing in MotoGP for 2016 with Michelin becoming official tyre supplier again, and with all the bikes running standardized electronics, you could argue coming into MotoGP this year could be a waste of time, with changes that’ll reset the rulebook the year after. And it’s no secret that LCR Honda’s Lucio Cecchinello was eyeing him up for that 2nd production bike before Jack Miller was shoved down his throat in LCR’s first instance of life after Stefan Bradl.

But on the other hand, what good are you going to get by sticking around? Is a 2-time Moto2 Champion really that much more valuable than a one-and-done promoted Champion, like Pol? I strongly suspect we’ve moved on from guys like Max Biaggi and Jorge Lorenzo, who didn’t make the jump until they were absolutely ready. Nowadays, you want to climb that ladder as soon as possible, especially with teams taking more and more chances on younger talent. And then of course, there’s the risk of what we could be seeing in this very season, and that’s getting exposed. Does your stock get damaged if someone else comes up and beats you, like what Johann Zarco is doing right now?

Tito Rabat is the definition of another very, very good rider who’s fighting against the tide. Thomas Luthi, Nico Terol and others you can put in that bracket of guys who are very good, but the opportunities to get into the top class and be a top player, seem to have passed them buy. Tito isn’t in that club yet, he’s clearly a cut above – But he needs to be careful and plan his next move carefully. Jumping up and down between tiers isn’t a good look most of the time – Ask Mika Kallio, Toni Elias, and the resurgent Danny Kent, and Tito is an excellent rider who’s matured excellently. The only problem is, MotoGP might not be a wine drinking town anymore.[/fusion_builder_column][/fusion_builder_row][/fusion_builder_container]