Lewis Hamilton and the Cloudy Filter of F1

The biggest takeaway out of the Japanese Grand Prix was Lewis Hamilton whipping out the Snapchat on Thursday’s press conference. In this post, I talk about the confusing landscape it leaves Lewis in.

“But first, let me take a selfie…”

Five rounds to go in an intense, back and forth Championship fight in Formula 1 and Nico Rosberg has just landed a sucker punch in Malaysia after Lewis Hamilton’s engine goes up in flames. But the biggest takeaway coming out of Japan a week later was Lewis’s Snapchat stories. Rather sad, isn’t it?

Much has been made of that fabled Thursday press conference, and the subsequent aftermath, and like a lot of times in F1, we as fans have had to look in the mirror and ask the sport some questions of how it’s covered, and Lewis Hamilton’s place within the sport as its beacon and #1 guy.

At the time, I was defiant in defending Lewis on his right to filter… But as you may have seen on our YouTube channel, a certain co-host of mine in Ryan King shared his perspective and I was a little more understanding of both sides of the coin. It’s partly my own fault, I’ve had a near personal obsession with trying to trump “Old man F1 media” for some time now. It’s been my greatest motivation to be who I’ve been on the Internet for five years now. But then you kinda have to accept… Lewis was kind of a douche here too, even if he was genuinely being sincere.

If I was in a meeting with a bunch of important people, and I whipped my phone out in the middle of someone asking a question, there would be INTENSE bitching under their breath. It’s rude and there IS a level of disrespect there that in hindsight, I didn’t consider. If I was on the receiving end of that, then sure, I’d be pissed off too.

As Ryan said, I think everyone involved has handled this wrong. The media’s backlash in response to this story was ridiculous and over the top. Criticism to the point where they said it may have had an impact on Lewis’s start that ultimately cost him the race? Ridiculous. Katie Hopkins going on LBC and spouting her usual brand of verbal diarrhea? Child, please. I get that being a member of the media is a loveless job (Trust me, it often is), but that level of backlash was just as asinine quite frankly.

However, and I will say this… Why was this only a problem now? This isn’t the first time press conference phone play has been a thing? I remember Sergio Perez whipping his phone out post-race for a selfie, and the media didn’t jump on his case then. Now, I’m not based in Mexico, but I somewhat doubt there was an agenda laid out against the rising star for having a bit of fun.

And what about all those Sebastian Vettel jokes we got last season? Especially in Russia when he stopped half way so all the marketing girls could get a seat and tell them where Lewis’s hotel room was? The media lapped that shit up, hailed Sebastian a changed man and everything. It was hilarious.

See, part of Lewis Hamilton’s problem here is… He’s Lewis Hamilton. As I’ve said many a time on here, he’s F1’s biggest star by miles at the moment. Anything Lewis does in comparison to someone else in the field, especially in the UK, will be multiplied by ten. He didn’t help his case in the aftermath of Thursday, firstly boycotting the Saturday post-Quali session because he didn’t like the media’s reaction. He then goes out of his way to block a bunch of Fleet Street journos on Twitter this past Monday.

That just screams pettiness to me. I mean, imagine being someone of Lewis Hamilton’s position, global megastar, going out of his way to google all these people’s names, find their Twitter accounts and go block them. C’mon, man. And what are they missing out on really? If they wanted to see your tweets that badly, they could just log off and view your account when they’re not signed in. Not to mention, Lewis’ Twitter is about as exciting as one of his race wins these days. 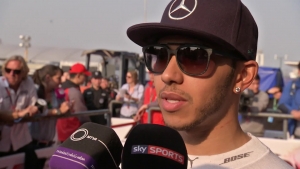 Lewis is damned if he does and damned if he doesn’t. If he sucks it up, it’s another round of irritation, boredom, and asinine questions. If he boycotts the presser out of said frustration, the media doubles down out of vindication because in their eyes, Lewis walking out justified all their stupid think pieces. It’s a lose/lose situation. I mean, this is the sport that made a MASSIVE story about him dying his hair blonde. He can’t win here.

Everyone could have handled this situation better. But, as said previously on this website, Formula 1 has never had a star like Lewis Hamilton in this social media era. He’s moving the needle in ways that no-one ever has before. That’s ultimately a good thing, and if it’s incidents like this that force us the fans to have hard conversations about where the sport is going right now then I think, in the long run, I can get behind it.

Should the media format of a race weekend change? Nah. Press conferences exist for the media to gather information. not for entertainment purposes. The only time that an F1 press conference is actually entertaining is when a driver goes against the grain, like with Adrian Sutil and Jarno Trulli’s barney in 2009. Expecting a press conference to be exciting is just fan entitlement 101 to me. And fans asking the questions? You sure you want that? Is swapping the asinine questions about Ferrari as a perceived threat for questions on Roscoe and Hugo Boss photo shoots really any better? I can’t lie, I’m cynical about the F1 audience in general on social media, so to me, I think it would get silly, fast. 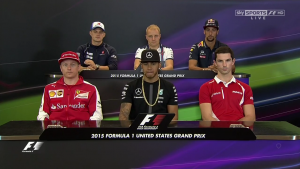 I’ve come to the conclusion over the last year, that Lewis Hamilton wants all the perks and caveats of being a star in a sport that has a lot of trouble producing them. But often, can’t handle the criticism that comes along with that. How many times in the last year has he had to backtrack from his own actions?

At Russia and Malaysia this season, Lewis has had to retract ambiguous statements regarding his team, and some of the mechanical issues he’s had with them, opening the doors for conspiracy theorists to jump to their own conclusions. There was the minute of silence for Justin Wilson botch at Monza last year. He defended himself on Twitter when the team made a protest at Max Verstappen, claiming it wasn’t anything to do with him when he actively made an effort to chalk Rosberg’s pole lap in Hungary off the board by running to the FIA… It paints the picture of a man who still doesn’t quite know how to handle himself in this sport. Maybe he needs Helena Hicks as a PR representative…

For Lewis Hamilton, he’s trying to be a modern-day sporting star in an environment so antiquated and afraid of change, that may just not be the right man in at the wrong time. Lewis has had more than his fair share of media faux-pas, but that’s the beauty of it – He’s now the most polarizing F1 driver the sport has had since Michael Schumacher. Ultimately, his actions and perceived image could harm him in the long run. I mean, we still use Jacques Villeneuve as a whipping boy on the Internet and he’s one of the better drivers of this generation. How he handles this unpredictable, pressure cooker sport, is going to be just as intriguing as how the sport, handles him.

PrevPrevious PostHulkenberg And The Renault Landscape
Next PostRossi’s Final ChapterNext