Sunday, August 16th, 2015. In Brno, the MotoGP race had just finished, with Jorge Lorenzo taking his 59th career victory, ahead of Marc Marquez and Valentino Rossi. It was a rather straight forward race from a contextual standpoint, Lorenzo had broken the lap record in qualifying, and lead from start to finish after taking the holeshot into Turn 1. What had shocked me, was that for the first time in nearly two and a half years, Jorge Lorenzo had lead the World Championship. It also made me realize – How badly I had gotten him wrong.

I can’t lie – I became enchanted by Marc Marquez since he debuted. And I’m sure many will understand why, he’s a freak, once in a generation talent that could very well be the one to carry the baton the legacy that Valentino Rossi has left on MotoGP, a legacy that’s changed the very fabric of bike racing itself, a star who transcended the limited popularity the sport had in the early 2000’s.

Marc has everything you could want as a casual fan. Incredible speed, a style unique of his own, limitless charm and charisma, twinned with the folly of youth and the promise of potential. Potential so great, he stunned the world and won the World Championship as a Rookie. After the World Title had changed hands between Stoner and Lorenzo three times, he was the breath of fresh air the sport didn’t know it needed.

And that was my own problem. I had become so absorbed in this 20 year old phenom, that I channeled that into my own frustration whenever Jorge Lorenzo showed the world what he was capable of. This is the problem with Casey Stoner, and now, Jorge – We expect these incredibly talented men to not only perform to the best of their ability, but also to captivate the casual fan, something that not everyone is capable of doing. 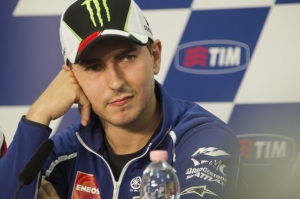 [/fusion_imageframe]Casey Stoner had his fans, but he also had many detractors. He was accused of constantly complaining. Moaning. Not liking the way the sport was heading. But hey, I applauded him when he stuck by his morals and retired a happy man in 2012, still just 26 years young. But then it hit me, Stoner wasn’t here to entertain you, he was here to ride the goddamn nuts off of a bike, and that was all the captivating I needed.

I had forgotten that in recent times. I condemned Jorge Lorenzo for being boring, and that was something that made me a hypocrite, especially after defending Sebastian Vettel so hard at the same time over in the four-wheeled world, after he was attacked for the same reason. Sure, Jorge Lorenzo probably isn’t going to go into after-dining speaking after his retirement, and he’ll never have Valentino Rossi’s fan-base… but that’s just the point. The man couldn’t give a flying fuck.

I opened my eyes to this after Aragon, a fortnight ago. After winning his 60th race as a pro, Jorge joked at Parc Ferme by acting like a shark, a clear reference to Valentino Rossi’s Misano helmet, pretending he was the fish, with the shark in pursuit. BT Sport’s James Toseland attacked him for the gesture, saying that it was an “arrogant” celebration and that “things like this will never make him as popular as Rossi”. Yeah, so? If Valentino had done that, he’d be hailed as a creative genius, getting away with showing off due to his level of charisma. God forbid the guy who’s so often been attacked for not being entertaining, show a bit of character for once? What’s he got to do, eat a Pork Pie on the BBC again? 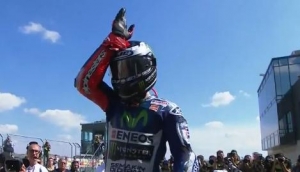 [/fusion_imageframe]The sport is in a transitional period. Rossi, love him or hate him, is 37 next February. He’s in the twilight of his career, despite his resurgence this season. Lorenzo vs Marquez WILL be the narrative for years to come. The sport needs to prepare itself for life after Vale. And I think with his resurgence causing all those Rossi fanatics to make some noise after six years away from being an actual title contender, it’s time to step back and realize just how freaking brilliant Jorge has become.

Sure, if Rossi goes on to win his 10th World Championship come November, we’ll all be in awe. But let’s be real here, if it wasn’t for the brilliance of Jorge the last few years, I think we may just struggle to put it into some true context. I grew up seeing Vale dominate the sport, smacking some supreme riders around. Biaggi. Melandri. Capirossi. Gibernau. Pedrosa. This title wouldn’t be the same. This would be a title won in the strongest field the sport’s ever seen, with two Double World Champions on his fairings. One, the most naturally gifted rider since his debut, the other, the rider who shrugged off his rivals, took advantaged of an injured Rossi, and matured into an outrageous, complete rider.

As for Jorge, he’s been the constant force in MotoGP since 2009. Since then, until last season, he had either won the Championship, or finished in 2nd. He now has 60 career wins, good for 5th all-time. A third World Championship will no doubt cement him as one of the greatest riders ever. But in an era where Rossi’s form still surprises people, and Marquez has had his humbling after two dream seasons, the one constant threat who can win ANY given race, is 99. Sure, his style doesn’t captivate people, but it’s effective, and when everything comes together, he’s simply unbeatable. Every race he’s won this season, has been a testament of that formula. 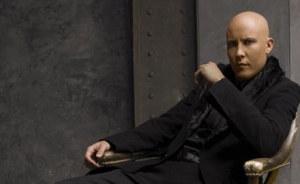 [/fusion_imageframe]Like with Floyd Mayweather, Sebastian Vettel, Mark Selby and others, you’re not paid to be entertaining. You’re paid to win. It’s not an obligation or a divine right. And for this MotoGP fan, I had to come down from my perch and admire just what a special rider #99 is, and as much as I’m sure we all want MotoGP to emulate the Moto3 division for thrills and spills, sometimes that just isn’t going to happen.

Sure, he’s the natural villain, the “grump” to the bright and buoyant characters of Pedrosa, Rossi and Marquez, but sometimes, that’s a good thing. Superman, needs a Lex Luthor. Max Biaggi and Sete Gibernau in the end, only made Rossi’s star power greater, and now, Lorenzo’s in the precise position to do the same. Only difference is, he’s the one that actually followed through with the Kryptonite and spoiled the party before, and he looks set to do it again.

You know why Lex Luthor became obsessed with trying to destroy Superman? Because he feared that the human race would one day become too dependent, and too reliant, if Superman would always come along to save the day. He feared we would be held back. And that’s why Jorge Lorenzo is so necessary in today’s MotoGP, and it’s why he’s often proven to be so great. Because for him, he may not be the hero the sport deserves, but he may certainly prove to be, the one it needs.[/fusion_builder_column][/fusion_builder_row][/fusion_builder_container]