Well, this is a Harrison101 first, me talking about bikes that aren’t MotoGP related! Sort of. But with no Formula 1 or MotoGP this weekend before the double header at Motegi and Sochi, I ended up sitting down with a tall glass of Vimto and watching “Superbike Sunday” on British Eurosport 2, featuring both the World Superbike round from Magny-Cours, and the British round as BSB was at Silverstone. 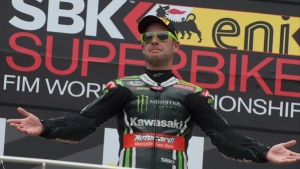 [/fusion_imageframe]The World Superbike rounds were up first, and it ended up being another dominant weekend for Jonathan Rea, another double taking his win count for the season up to 14. Race 1 was a changeable conditions affair, with Tom Sykes leading the charge in the early going, but like with so many other occasions this season, his tyres seemed to fail on him in the second half, and Rea would go through to win. Also, nice to see Sylvain Guintoli get a well deserved podium after struggling on that Pata Honda this season, and a home podium too. Oh, and a brilliant job from Leon Camier in 5th, representing MV Agusta. We affectionately called him “The Ambulance Chaser” on #BikeLive because he always seems so filling to cover for people, but the man’s a very good rider and I’m glad he got a worthwhile result.

As for Race 2, the track had dried up by then, and we got a solid fight in the first half between Leon Haslam the pole sitter, the Kawasaki’s, and Ducati’s Chaz Davies, who going into France, was on a scintillating run of form, scoring 140 out of the last 150 available points. Haslam led but faded in the middle stages, as once again, so did Tom Sykes, but once again, Rea just had the measure of the race to win, but Davies took 2nd to score his best ever French result. And another impressive job from Michael van der Mark in 4th, continuing his impressive rookie season. Seriously, his pass on Leon Haslam was god-tier, one of the best of the season. Go find it.

Jonathan Rea now has 528 points, just 24 shy of Colin Edwards’ all-time record of 552, set back in 2002. Given how he’s not finished a race lower than 4th this season, expect that to go down, in what’s been one of the most incredible biking seasons I’ve ever seen. I know Jonny won’t get true credit for it because World Superbikes isn’t what it used to be, but in a stacked field, he’s been a different (French) mustard. Bravo Jonny, you’ve done Ulster proud. 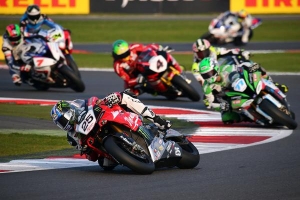 [/fusion_imageframe]Meanwhile, the British Superbike Championship headed to Silverstone for its penultimate weekend. And it was another brilliant double from Josh Brookes. And what was most impressive about it, was the sheer level of control he had out there.

At times, he was in a scrap with a loaded leading pack, containing guys like James Ellison, Shakey, Dan Linfoot, etc, and when Josh needed the extra speed, he found it and kind of made a mockery of the field in doing so. Josh has always been a brilliant rider, but now he’s on the brand new Yamaha R1, and it is an astonishing bike, something that I suspect, has caught the field out. I mean, he’s won [/fusion_builder_column][fusion_builder_column type=”1_1″ background_position=”left top” background_color=”” border_size=”” border_color=”” border_style=”solid” spacing=”yes” background_image=”” background_repeat=”no-repeat” padding=”” margin_top=”0px” margin_bottom=”0px” class=”” id=”” animation_type=”” animation_speed=”0.3″ animation_direction=”left” hide_on_mobile=”no” center_content=”no” min_height=”none”][fusion_tooltip title=”(And only finished off the podium twice – One of which was from the back of the grid to 4th!)” placement=”top” trigger=”hover” class=”” id=””]11 out of the last 13 races[/fusion_tooltip] for crying out loud, he’s on an insane run of form and Kawasaki need to improve next year, because this new Yamaha R1 is insane.

However, I also want to go back to something Shakey Byrne said after Assen, and that was him criticising the Showdown format itself. For those unaware of how it works, here’s a quick explanation:

With three weekends to go, the Top 6 riders in the Championship are cordoned off and have their points total at 500 + their Podium Credits (Riders get 5 points for every win, 3 points for every 2nd and 1 point for every 3rd leading up to that point), the scoring then plays out like normal, most points at the end of the last 7 races, wins the Championship. Blatantly, this has been done to try and force a closer title battle. Now, Shakey doesn’t like this format, as often, good riders who aren’t in the title race like Christian Iddon for example, can get in the way.

Now, it could be very easy to criticise Shakey for sour grapes, when he’s already won four titles, but he may have a point, regarding the flawed nature of the Showdown itself. I think the format may have outlived its usefulness. 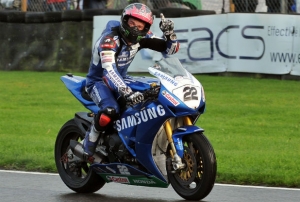 [/fusion_imageframe]Have to thank my radio husband Louis Suddaby for these numbers, and they make for interesting reading – If BSB had NEVER gone to the Showdown format in 2010 Shakey would have won SIX titles instead of four. In 2011, where John Hopkins and Tommy Hill missed multiple races that season, but flourished in the Showdown rounds. The other example would have been 2013, a season won by Alex Lowes.

Josh Brookes would have won the 2012 Championship too, as Shakey missed four races in the “regular season”. And to completely dispel the “It guarantees a closer title race” argument, the 2010, 11 and 12 Championships would have actually been even closer, going into the final round if the season was done via conventional scoring.

Yeah, call me old-fashioned, but what was wrong with the old system that I’m missing? If a rider is dominant, they will win early anyway, and I don’t believe that you should have to effectively, win the Championship twice in order to take glory. For me, the Showdown format has outlived its usefulness. Why “fix” something that was never really broken in the first place?

And just before I sign off, a massive thanks to all of you for taking me over 1,500,000 views on YouTube. Despite being four years old on YouTube now, it’s still such an honor that I get to be able to entertain so many people. I could not continue to do this, without your support, so thank you all so much. Here’s to the next million! 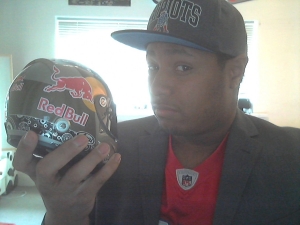