“The Jackass, dances with the Devil.”

This past Wednesday, it was officially announced that 19-year old Australian and Moto3 World Championship leader; Jack Miller, would be leaving Red Bull KTM, and in the first time in the sports modern history, would be skipping the intermediate Moto2 tier altogether, and debuting in MotoGP next year, on a production Honda sponsored by the CWM-LCR Honda team.

This was on the cards for a little while, but seeing it actually confirmed nearly made me pop my eyeballs out. A rider going from Moto3 to the top immediately has never happened before, and maybe for good reason. Jack Miller is taking an incredible gamble here, and I’m not entirely sure it’s the best move for his career.

Now, if anything, the sport has been trending towards the young for a little while now. The field itself is getting the younger. Our World Champion, is just 21 years old. There will be another 21 year old on the same bike next year in Scott Redding. Pol Espargaro is 23 and heavily tipped to be a future Factory Yamaha rider. Maverick Vinales will be 20 when he debuts for Suzuki next year. Alex Rins and Alex Marquez will be immediate Moto2 title contenders next year, both will be 19. 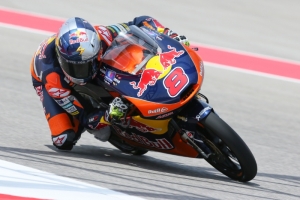 [/fusion_imageframe]See, the trend is getting younger, and Dorna are encouraging that, by bending their own rules to cater for the younger talent coming through. Dorna tweaked their own rulebook to let a 20 year old Marc Marquez debut for Repsol Honda last year, and now Fabio Quartararo will be allowed to debut in Moto3 next season at 15 instead of 16, because of him winning the CEV Moto3 Championship. Why? It’s the “sexy” thing to do. You WANT fans to be excited over new up and coming talent… Even if you embrace the odd Valentino win now and again.

Jack Miller is a curious case. To be honest, I don’t even think he’s the best rider in the current Moto3 class, with Alex Rins and Alex Marquez in my eyes, making stronger arguments over improvement, consistency, and race craft. Jack’s in the middle of a dry run of form, the early advantages of the Spanish Civil War between the Honda runners is beginning to wear thin as Rins and Marquez are running him down at a rate of knots, with Miller going four straight rounds without a win, going back to Germany from before the summer break.

Jack is, in the grand scheme of things, inexperienced. He debuted just three years ago, and has only really started winning now he’s on a field leading KTM package, and his MotoGP debut will be just his 56th career start. Not to mention, he’s a very small rider, and jumping up from a 250cc bike, to a Production Honda with 1,000cc and 250 horsepower is an incredible jump, and I’m not sure he has the experience, or skill to adapt to such an enormous leap in power and control, in such a short space of time. Why NOT go to Moto2, even for a year? If Jack’s as good as he thinks he is, he should do great there, right? Don’t forget, Marc VDS had their eyes on him VERY early on in the season.

Speaking of which, his attitude has come into question this season, now he’s at the top of the Moto3 field. He has already racked up three penalty points, has a reputation of taking little responsibility in the collisions he’s taken this season, and of course, he lashed out in Brno, kicking a rider for not giving him enough space in Qualifying, prompting me to go full Adam Hills and tweet him: “You’re not special, princess.”, in true Australian fashion. Such pettiness is hardly ever smiled upon in a sport as ruthless as this one, and his general nonchalant attitude raises eyebrows for the wrong reasons.

I look at Jack, and I wonder if he’s even taking this title challenge and future job seriously. I know he’s only 19, and boys, will be boys, but you have to have a certain level of maturity and temperament to be successful at the top. Look at Marco Simoncelli when he was in his prime. I always said, he could have been a title contender if he just toned down the crazy a couple of notches. Maverick Vinales and Andrea Iannone are also examples of what can be done once you mature and learn from experience

And not to mention, he’s been thrown into the hornet’s nest, with a top class that’s going to be EVEN better than last year, with Suzuki’s return, and arguably the most stacked top class ever, with lower down teams like Avintia switching to Ducati power, as well as stud prospect, Maverick Vinales as a yardstick. 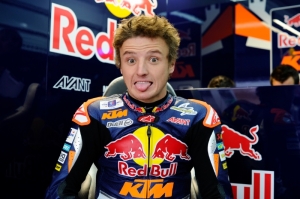 [/fusion_imageframe]The gamble element in all this is prominent, when you consider what it can do for other riders who went the top and it not working out. Look at Mika Kallio. Grafted and grafted, finally got to the top class with Pramac, but a 15th and 17th in the World Championship followed, and he was back down to Moto2 with his tail between his legs. And once you get removed from the top class, it’s practically impossible to get back in, and unless you’re REALLY good on that Production Honda, it’s hard to make an impact. Kinda puts Scott’s incredible rookie year at the top into context.

We came close to seeing that happening again with amazingly, some of the younger talent on the hotseat, and close to be dropped, like Bradley Smith and Stefan Bradl were earlier in the season. If it can happen to them (Bradl a World Champion no less), then it can happen to anyone, and if this move doesn’t work out, Miller could be one of those guys that drops to Moto2 at 22 or 23, and is stuck as people will look at him as the guy who “Failed to make an impact”, ala Mika.

And Moto2 is already loaded full of hungry, younger riders who would kill for a shot at the top. Tito Rabat, Johann Zarco, Dominque Aegerter, Thomas Luthi, Simone Corsi to name a few. But that’s also the tier’s biggest problem, and its logjam of talent meaning there simply isn’t enough bikes to go around. Corsi can’t get a look in for the senior team, even with the possibility of TWO empty seats at Forward Yamaha for next year!

And this is the gamble that Jack Miller is taking. He’s a solid rider, who’s marketability will win him some fans and sponsors, but if he doesn’t knuckle down and realize it, he could be just another small fish, in the ocean that is, MotoGP.[/fusion_builder_column][/fusion_builder_row][/fusion_builder_container]