“You merely adopted the dark Nico, I was born in it!” – Lewis Hamilton, probably. Hey guys, Dre here with another Formula 1 Race Review, as the crazy train headed to Singapore for a round that would change the perspective of the Championship once again. Hamilton took a dominant victory as Rosberg had a car that replicated Frankenstein’s monster. Further back, Sebastian Vettel and Daniel Ricciardo had brilliant drives to negate Fernando Alonso’s totally legal start, Jean-Eric Vergne had a very polarizing drive and did the new radio rules do anything at all? Read on and see what I thought in my Singapore, Race Review. 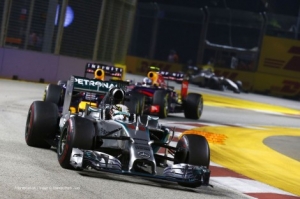 Props to Lewis, there is something very rewarding about driving the wheel nuts off a very fast car. And I think last night, we all saw the TRUE power of that Mercedes. And this was a race where the Safety Car messed with the Top 10 in different ways. Hamilton was locked into his Super Soft tyres and had to stretch them out as long as possible because he had yet to run the “Prime” tyre where as everyone else behind except for the Toro Rosso’s were trying to stretch out their prime tyres to go to the end of the Grand Prix, with the Red Bull’s leading the charge.

Hamilton gave it the maximum post-safety car, broke off a 25 second lead after the safety car, boxed, came out, passed Vettel, and still won convincingly. Simply stunning and a contender for the drive of the season so far. A combination of a really good driver and a car that is out of this world compared to the opposition, a shame given that Red Bull and Ferrari were as close on paper, as they’ve been all season.

Basically, Lewis Hamilton yesterday was like fighting Ogre in Tekken 3. Just when you think you’ve got him, he absorbs Heihachi and kills you. At least, it made for a semi-tense ending. 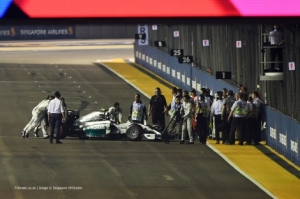 It was a very different race for Nico Rosberg, who suffered an issue with his steering wheel right the way up until the warm-up lap. He couldn’t get the car going, so he had to start from the pitlane, and when he did, he was double shifting the whole way through, AND his pit limiter was broken. As a result, he was stuck behind Marcus Ericcson’s Caterham and was four seconds a lap slower.

The pit stop Nico had was a horror show. Because his limiter was broken, he had to be TOLD to enter at first gear and below 6,500 rpm, and to deliberately stall the engine and rolled into place, then they had to restart him on the jacks. It was painful to watch, like a horse that needed to be put down to end its suffering.

Rosberg suffered just his 2nd retirement of the season, but unlike Lewis’ moments of unluckiness, it cost him the full 25 points, and his World Championship lead. This title race takes yet another crazy turn. 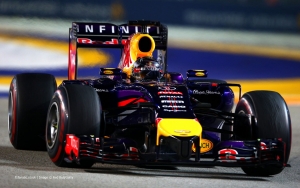 Yes, Singapore’s race wasn’t the most exciting on the face of it, but all the drivers deserve praise because this one was especially brutal. 35 degree heat combined with 75% humidity. Kevin Magnussen and Danill Kyvat looked like they were about to collapse after that 2 hour torture fest. Sebastian Vettel had to cancel a couple of TV Interviews after the race due to Stomach Cramps too.

And remember, the Top 6 except for JEV, were all dancing with tyres on the brink of collapsing. And no-one hit the wall or made a serious driver error, except for Adrian Sutil, who was rather slow in getting out of the way. Speaking of Vergne, I’m not entirely convinced his 6th placed finish was as good as it was, just a good strategy call from Toro Rosso to put them on fresh rubber. How good was a driver performance really when you took TWO stop-go penalties for exceeding track limits?

Also, Fernando Alonso I think got away with a drive-through of his own for only giving back the one position to Sebastian Vettel for mangling his start. The replay clearly shows he gained an advantage on Seb AND Daniel Ricciardo. Last time he did that, it cost him a Championship. But in all seriousness, the field needs saluting for a tremendous effort, and maybe Bernie ought to take a look at possibly reducing the race length from 305km. We’ve hit the time limit multiple times now and the race might be a bit TOO long at 2 hours. Especially with the field getting younger. 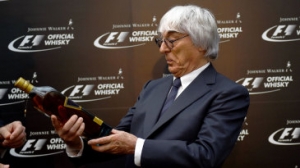 [/fusion_imageframe]So, did that Team Radio change mean anything? At all?

Because seriously, this race felt no different to any other race we’ve seen so far. Like with a lot of things, the FIA has handled this uber-important rule change rather badly, in my opinion. They came out with the “hammer” of “No performance enhancing messages”, then slowly eased their stances on it due to team confusion and lack of clarity, which at this point, should be the FIA’s official slogan.

And if the FIA’s actual plan was to attempt to make Formula 1 more exciting and add YET MORE artificial entertainment (As if a 2x points finale wasn’t enough), then it didn’t. If anything, it had the opposite effect as David Croft’s head nearly exploded from trying to decipher them all.