The Problem With Sebastian Vettel

“The most questioned World Champion in F1 History.”

Formula 1 is in the midst of an exciting new era. Hybrid technology, more power than in previous years, a title scrap between two drivers with even more pressure than what Senna and Prost had to deal with back in the 80’s, and a heap of new stars have risen to the surface, such as Daniel Ricciardo, Valtteri Bottas and Kevin Magnussen, all with consistently impressive drives.

But one man attracting a different sort of headline during this time, is Sebastian Vettel. He’s been outshadowed by his teammate in Daniel Ricciardo, a man who has walked into the team as a guy expected to play second fiddle, and has beaten him 11-2 head to head, with a 60 point difference between the two, through 13 rounds. He’s captured a new wave of fans with his likeability, his charm, and his ability to drive the wheels off of a Red Bull that hasn’t been anywhere near its dominant best.

That leaves Sebastian in a really difficult position, and not for the reasons you’d expect. Allow me to explain why.

I’ve said it before, and I’ll say it again here – Sebastian Vettel may very well be the most criticized and questioned World Champion this sport has ever had. And it’s not entirely his own fault either. We now live in an era where fans of the sport are more engaged than ever, and many have tainted Sebastian Vettel’s achievements in the sport to date, because of the superior Red Bull car through 2010-3, designed by Adrian Newey. 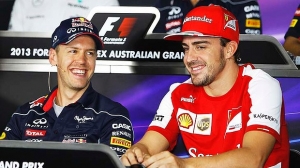 [/fusion_imageframe]The outstanding performance of Fernando Alonso, a more popular driver, in a Ferrari that wasn’t quite on the same level in 2012, didn’t help. Nor did Mark Webber’s slow decline from 2011 onwards as many fans see team mate fights as a fundamental test of driver skill.

For those who’ve doubted Sebastian’s ability, or have thought maybe Fernando Alonso or Lewis Hamilton are superior drivers, this season is their justification. “Vettel’s struggling! It was the car all along!”, etc.

Sebastian’s caught between a rock and a hard place, and his reputation is a big problem with that. He’s EXPECTED to beat Daniel Ricciardo because of his status of being the 4-time, reigning World Champion. So he’ll get no credit for any good drives he takes. Everyone was talking about Ricciardo’s 3rd in Spain for instance, when Sebastian had come through the entire midfield to finish 4th from 15th. If he doesn’t perform, the doubters ring up, and go “HAHA! Knew it!” (Anyone who knows me well, has seen my Ask.FM inbox…Need I say more?)

But here’s the thing…Has Seb really had that “bad” a season, or is it something more?

Think back to testing. Red Bull had a ton of reliability problems in Jerez and in Bahrain, the majority of which, was when Sebastian was driving, who needed the time more, because the cars were completely different, and the 4 years of data Seb had beforehand had to be chucked out of the window. Danny Ric already had a fresh base to work with. 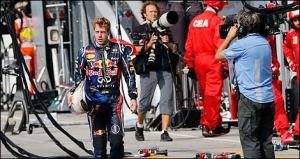 [/fusion_imageframe]Sebastian’s side of the garage has been littered with mechanical problems this season:

Not to mention, strategy wise, Red Bull have steered him down the wrong path on numerous occasions:

Canada – Ricciardo given the the undercut and advantage as Vettel was stuck behind Perez, came out ahead, leading Red Bull when Perez started having problems, Danny goes on to win
Britain – Put on inferior 2-stop strategy, one of only three drivers in the points to finish in the points on the same strategy.
Hungary – Missed out on a chance to pit on the Safety Car, then put in the ineffective prime tyre (Same thing that ruined Bottas and Vergne’s races too, and could have robbed Hamilton of a shot at winning)

And just this past weekend at Monza, Dr. Helmut Marko admitted they got it wrong with Seb’s car again after boxing him seven laps before Ricciardo did, forcing Seb to go 35 laps on the prime tyre, with Sebastian being very lucky not to fall into the pack of Magnussen, Perez, Button and Raikkonen. 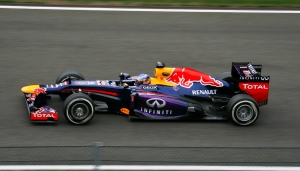 [/fusion_imageframe]Now, I’m not saying Ricciardo hasn’t been unlucky himself, his first two races are a prime example of that, and I’m not taking anything away from what has been an incredible first season at Red Bull from him, but people damming Sebastian’s season need to take a look at the bigger picture and realize that Seb has been robbed of a ridiculous amount of points, and maybe we shouldn’t be so quick to condemn him in a hurry.

But this is Sebastian Vettel. He’s not an Alonso or Hamilton in terms of widespread approval, but this is a man who in 6 years (nearly to the day), has won 39 grand prix, 64 podiums, 45 pole positions, over 1,500 points, as well as 4 consecutive Championships. He’s already reached a hall-of-fame level standard if he retired tomorrow and because he’s reached said standard, we expect that to go on forever. He’s at such a standard and had such a reign of dominance, anything lower and we break out the carving knifes in the parc ferme area… And I’m not sure that’s the right way to go.