“The difficult second album for Milestone.”

I haven’t done a Game Review in donkeys years, so now I think would be a good time to talk about Milestone’s 2nd of the modern MotoGP games, and their first next-gen effort, MotoGP 14. Does it improve on the solid but unspectacular foundation that MotoGP 13 left behind? Read on and find out.

Note: I’m reviewing the PS4 version of the game, so your version may be slightly different, but the key points remain the same.

Because every gamer in 2014 has the hard on for technical details right now, let me just tell you in advance, the game runs at 30 FPS. But the resolution is at 1080p, and I have the PS4 version, and I can tell you now, the game looks STUNNING. No, the frame rate being only 30 is NOT a problem, and I don’t care what you tell me. The game plays just fine.  It’s as pretty a racing game title as I’ve seen. I know a lot of that is down to the increased processing power [/fusion_builder_column][fusion_builder_column type=”1_1″ background_position=”left top” background_color=”” border_size=”” border_color=”” border_style=”solid” spacing=”yes” background_image=”” background_repeat=”no-repeat” padding=”” margin_top=”0px” margin_bottom=”0px” class=”” id=”” animation_type=”” animation_speed=”0.3″ animation_direction=”left” hide_on_mobile=”no” center_content=”no” min_height=”none”][fusion_tooltip title=”Duh?!”]of the PS4[/fusion_tooltip], but Milestone borrowed the Yebis 2 lighting engine, often used by Square Enix, to enhance the visual feel of the game, and it is fantastic. Some of the screenshots and the level of detail, combined with the pop, is beautiful, and almost photo-realistic.

A shame you’ll be travelling so fast not to pay true attention to it while playing, but if you watch the TV replays, and especially in slow motion, you’ll be blown away. Also, I have to give props to Milestone for fixing some of the frame rate drops that popped up in 13′ last year. I’ve been playing the PS4 version for a month and haven’t experienced any drops or stuttering at all. 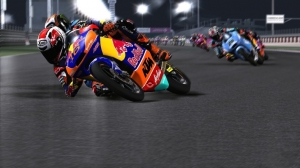 A bit of spit of polish can go a long way, and again, Milestone have done a fine job of improving MotoGP 13’s, rather bland presentation. The main game hub is a little more complicated, but they feature the garage of the bike you last used, rather than the really repetitive stock footage in the background every time you went to the main menu.

Creating a rider is still rather bland, but they have much better colour combos for rider gear, and they have a much better range of riding styles, and generally give more options to choose from. Also, I’m glad you can finally choose a black rider to ride with. I know, it’s just a picture, but there really is no excuse to NOT have a better range to play with.

The biggest improvement you get in this game though, is the headlining game’s “Career Mode”. The rider lounge actually feels like a motorhome and paddock, and it’s a marked improvement over the one room approach 2013 had. And it upgrades too as you move up tiers, a nice touch. Overall, I love the little touches you get overall, including the sound you make when you put the helmet on, the improved celebration at the end, or the videos when you’re in “Real Events” or “Challenge The Champions” mode, the game has definitely improved in how it’s presented. Bikes sound great too.

What I didn’t like, was that a TON of the avaliable roster, especially in the lower classes, were locked off on launch, with Milestone taking nearly 2 weeks to release DLC to release the rest of the avaliable roster (Like Alex Rins and Alex Marquez etc.). Obviously, it’s not a problem now, but it’s almost like being punished for buying the game on launch. That’s unacceptable. You’ve had ages to get the licensing and months to get the liveries down, there’s no reason why it couldn’t have been done on launch. 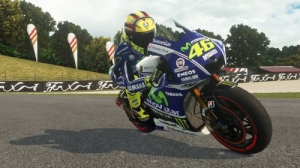 There is a marked improvement in the gameplay as well. As Milestone themselves declared, the AI is definitely improved. There’s noted differences in rider personalties, such as Marc Marquez being a little more aggressive and slidey, compared to Lorenzo and Rossi being silky smooth. The AI now react to your presence, compared to MotoGP 13, where they wouldn’t have a clue, and run you off the bike, infuriating you no end.

The AI now race much more realistically, they follow the racing line more often, and it’s much more authentic towards the actual product, which is excellent. Most of the ‘near-crash’ animations are still annoying and more distracting than anything else, but it’s only a minor critique. Lap 1 starts are still a bit of a clusterf***k at times, but that’s a given for games of it’s kind.

The game retains it’s three major physics models, Standard, Semi-Pro and Pro, with the additional riding aids you normally get in racers carrying over. You need to rack up the practise to master the deeper handling models, but the game is incredibly responsive and enjoyable. You can chuck around the less powerful Moto3 bikes, but great care has to be taken when you get to the top class, mastering throttle control, sliding into corners, when to accelerate, not to wheelie out of corners, etc. It’s easy to have fun with and pick up and play, but MUCH practise needed to master and shave those vital tenths of a second off of your lap.

The throttle response in particular works perfectly with the new PS4 controller, making it so much easier to be consistent and more rewarding to master the throttle, especially important when handling a bike with 260 horsepower capable of 220 mph.

One thing I’ve noticed though as a negative, is the timing screens don’t make any sense at times, often only being accurate to fractions of six. Bizarre as one time I was classed as winning a race by 0.000 seconds, but the game glitched and only awarded me the points for 2nd. Just irritating, and the timing screens just make no sense sometimes.

In a plus point though, post DLC-patch, there’s now FULL grids for all three classes for the first time on the PS4, something that HAD to be done. If I want to ride as Ana Carrasco, let me ride as her, dammit!

Also, there is a Safety Car mode, but it handles exactly how you would expect… Just seems like a shackled tie in for some BMW Sponsorship. 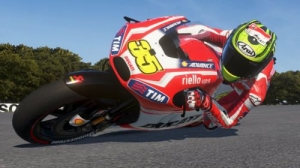 Without doubt, MotoGP 14 is a more complete video game than its predecessor. Career Mode is much improved. In this year’s incarnation, the transfer deals are more realistic, and there’s the addition of bike development, collecting Data Packs to improve the bikes Engine, Suspension, Brakes, or Suspension, as the season goes on. Because development of bikes reset if you change teams (Which you can do twice a season), the game encourages you to be more realistic and be loyal to your current team, a nice touch. And if you do, even if you’re in a top bike for the class, you’ll feel the disadvantage on the track. In addition, the season now holds testing sessions to earn the chance to earn multiple data packs and speed your development up. It’s suttle and small changes, but it’s definitely improved on the whole.

Beyond the main Career Mode, the game has added two new main modes, “Real Events 2013” and “Challenge The Champions”.

In Real Events, you take on a bunch of real world events, based on moments in the actual 2013 MotoGP season, and you have the chance to either replicate, or re-write history. For example, can you recover from Marquez’s only race crash, Mugello 2013, and come out of the gravel and finish 2nd?

In “Challenge The Champions”, you enter the old school and ride as heroes from the past in MotoGP history, such as Rossi on Repsol Honda, Freddie Spencer, Mick Doohan, Loris Capirossi and more. It’s a similar deal here, beating challenges or replicating history, and there’s even some fictional events thrown in. The older bikes definitely handle differently as well and there’s some genuine challenge here. If you’re thinking this is similar to F1 2013’s “Scenario Mode”, you’d be right, but it’s a nice addition to beef up the games longevity, as the Career Mode does get repetitive by the time you get to Season 3.

Online play returns and is largely unchanged from last year, but the game plays well online, I had no server issues at all, and if you’re into that sort of thing, what you get is satisfactory, if unspectacular.

I look forward to Milestone’s future DLC, if 2013’s pattern is anything to go by, expect the Red Bull Rookies Cup to come in at some point. But I’m annoyed they felt the need to charge £4 for the Laguna Seca track, a poor excuse for what clearly an error in the calendar… Why would anyone race Laguna Seca outside of Career Mode, which it isn’t in, because Argentina’s replaced it on the calendar? I get Milestone needed something to sweeten the pot as a pre-order incentive, but that’s unacceptable.

MotoGP is a slap in a face to its direct rival in Codemasters and their F1 series. Why? Because THIS is how you do a sequel. Milestone listened to the fans, and worked really hard to improve the issues that 13′ had, and have made a game here, that is improved in every major department. This is the bike simulator that I’ve been wanting ever since I played MotoGP 4 on the PS2 when Namco had the license.

If you’re a MotoGP fan, this is a must buy, but is it if you’re not? Well, if you REALLY can’t wait for Driveclub on PS4 and you have a lack of options, you may want to give this a shot, it’s a very satisfying game to play. There’s a demo out, so at the very least, give it a try and see how you feel from there. But overall, this is a great racing game, and will take some topping for best in class for 2014. Recommended.

What do you think of MotoGP 14? Let me know what you thought in the comments. Hope you enjoyed the review, and until next time, thanks for reading!

Graphics: 9/10 – Brilliant new engine makes the game look gorgeous, especially in slow motion. (No, 30FPS is NOT a drawback)

Presentation: 7/10 – No full grids on Day 1 is still disappointing, but the added details do add up.

Gameplay: 9/10 – An excellent improvement and the best bike physics in years. Realistic and rewarding.