“You know the big problem in telling fantasy and reality apart? They’re both ridiculous.”

In these crazy three and a bit years since I started making Formula 1 videos and became the freelance broadcaster and journalist I am today, there’s two things I’ve made no shame in admitting. Number 1 – I’m the most opinionated of all the Formula 1 YouTubers out there, and Number 2 – I’m a Sebastian Vettel fan, who until this season, was adamant in thinking was the best driver in the world. Two states of mind, which when combined on the nuclear warhead that is the Internet, can be volatile at the best of times.

Sebastian Vettel isn’t popular here. Period. Lewis Hamilton and Fernando Alonso for me, are the two most popular drivers in F1, and I suspect Kimi Raikkonen and Jenson Button aren’t far behind either. The amount of times I’ve been questioned as to whether Alonso and Hamilton are better, via Ask.FM, has to be into the hundreds, and the most commonly asked question I ever get is: “Why do you support Sebastian Vettel?” 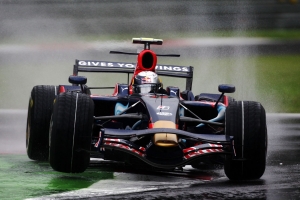 [/fusion_imageframe]You wanna know? It was 2008, and I was still coming off the back of the Schumacher retirement that rocked F1 forever, the true end of an era so to speak. I still to this don’t day, remember watching much of the 2007 season because it just didn’t feel the same. When I started watching again in 08’, there was this young German fella called Sebastian who had just started full time for Toro Rosso, and I warmed to him immediately, despite the fact he made a fair few mistakes early on. He was witty, extremely likeable, funny with his impressions and his happy-go-lucky nature I warmed to very quickly.

I’ve always liked Germany’s people, and that twinned with a guy who so warmly embraced British comedy and culture, like being an enormous fan of Monty Python (My favourite comedy series ever), and Little Britain (Well they can’t all be winners), and when he won at Monza 2008, I was pretty much all-in, it was such an amazing “breath of fresh air” moment for F1. A potential new star, like what Daniel Ricciardo is doing now.

And to this day, I’ve stuck with that. If anything, my liking of him has grown even stronger due to his personality. And I LOVE the helmet design gimmick he’s passed into F1, I love seeing the creative sides in people and his designs have been amazing so far (See Top 10 helmet designs for more on that), and have you noticed how now, other drivers like Adrian Sutil and Romain Grosjean have done the same? It’s a trend.

Many people have asked me how I feel about Sebastian’s switch to Ferrari, whether I’ll continue to support him, whether I’ll support Ferrari or not, whether I’ll still like Red Bull, all that stuff. So I thought it would make for something a little bit different if I just spoke from the heart about how I feel, the future going forward and so on. So, for once, I hope you can give me a pass as I leave my journalist hat outside while I write this one out, as much as I like to think I inject a little bit of me into every post I write, this one’s a lot more personal. 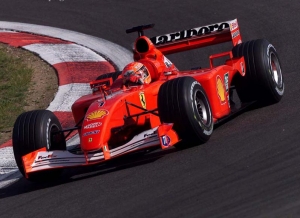 [/fusion_imageframe]I have a strange relationship with Ferrari. I started watching Formula 1 in 1999, the year Michael Schumacher broke both his legs in that horrific crash at Silverstone, and Eddie Irvine had to pick up the slack with a golden opportunity to win a World Championship. I grew up with a Dad that loved sports, and loved Michael Schumacher. So naturally, that got passed onto me. I know I’m not the only one who fell for that combination. Schumacher, the incredible athlete and winner, combined with the beautiful scarlet red Ferrari in which he dominated the first 5 years of the decade. It was only after he retired the first time in 2006 did I start taking F1 and its history and realizing that there was a more controversial, darker side of Schumi, and Ferrari itself, it’s political power, and when they’ve bent the rules to suit them. To this day, Ferrari can veto so much when it comes to F1 and its regulations, that it’s terrifying.

My appreciation for Ferrari has faded as I’ve gotten older. Not being a fan of Fernando didn’t help when he was the centrepiece from 2010-3, and now I’m kind of conflicted as to whether I start buying Ferrari merch (Like I know friends of mine who have), and wearing red, just because Sebastian now drives for them. 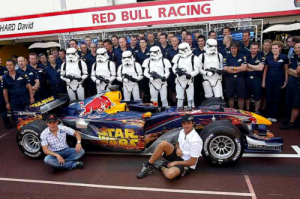 [/fusion_imageframe]In addition, Red Bull Racing is a team that I’ve genuinely warmed too over the years. I’ve met Christian Horner, and he was thoroughly nice. They used to be the cool kids who milked the marketing dollar to the core (And to be honest, they still do now). Remember those Star Wars liveries and the Storm Trooper suits in Monaco? I adored them. And heck, then they signed Adrian Newey, started taking things seriously and actually started winning. And they believed in Seb from the team he was 12, and he owes them so much for giving him that amazing opportunity. That stretch of dominance from 2010 to 2013 is the nearest thing we’ve seen since Schumacher [/fusion_builder_column][fusion_builder_column type=”1_1″ background_position=”left top” background_color=”” border_size=”” border_color=”” border_style=”solid” spacing=”yes” background_image=”” background_repeat=”no-repeat” padding=”” margin_top=”0px” margin_bottom=”0px” class=”” id=”” animation_type=”” animation_speed=”0.3″ animation_direction=”left” hide_on_mobile=”no” center_content=”no” min_height=”none”][fusion_tooltip title=”…The first time.” placement=”top” trigger=”hover” class=”” id=””]hung it up[/fusion_tooltip].

So yeah, it’s not an ideal situation. I’ll support Sebastian whoever he drives for. That’s not the problem. It’s the Ferrari thing. As cool as a brand they are, and as much as I adore their road cars, being the petrolhead I am, their F1 team…Not so much.

And then there’s the magnitude of the switch itself. The former World Champion knocked off the throne by a dominant Mercedes package, and now, is heading to Maranello, with his career still not quite fully established, according to many.

The thought alone that a four-time consecutive World Champion still needs to convince people of his greatness to me, is mind-boggling, but he’s the victim of the new age of Formula 1, where we give so much credit to a great car, that the driver in the best car gets criticized. I suspect Michael’s success at Ferrari (A car known for bulletproof reliability as well as speed), may have something to do with that. Makes you wonder how the reception would be for him if we had massive amounts of social media…but that’s for another blog.

Many still think, because he was in the best car, it neuters his ability and makes him look better than what it actually is. Now, I’ve written before as to why I think that’s a terrible argument and one that weakens EVERY driver in the sport who’s won, but if there’s one exciting element that could come as a result of heading to Ferrari, it’s the chance of silencing every doubter that Seb has left. 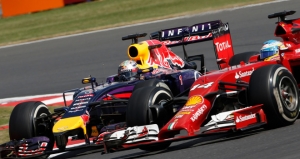 [/fusion_imageframe]Over the last three years, I’ve had countless people argue with me on the Internet over Seb’s “greatness”, and that he “needs to win in a weaker car”, and Ferrari at the moment, are the weakest they’ve been in nearly 25 years. The possibility of maybe, just maybe Seb winning there, a 5th title having had a team built around him, following his idol in Schumacher, would cement Sebastian as of the greatest drivers the sport’s ever seen.

What worries me though, is the parallels you can draw between this, and his arch rival, Fernando Alonso. He was a guy who benefitted from a uprising Renault team, won two straight titles, and has gone up and down the paddock since then, desperate to win with a second team, or with a team that was built around him. McLaren were all for it…just not with him. Renault on the way back just wasn’t the same, and Ferrari came close but couldn’t quite get over the hill. I fear Seb may be taking the same path.

Formula 1 and success, can so often be linked with timing. Alonso could have gone to Red Bull in 2007 and declined. Imagine if he had! Lewis Hamilton very nearly stayed at McLaren in 2012, and hit the jackpot by switching to Mercedes. The list of examples goes on and on. Timing is so imperative, because one minute, a team can be amazing, the next, it can be terrible. Anyone who supports Williams can vouch for this. 2013, their worst ever season. 2014, their best in a decade.

I don’t want Seb to be another notch on Ferrari’s failed bedpost. And I fear that, having just seen Fernando’s ultimately failed run with the team after 5 seasons of trying, that history could be about to repeat itself. And that, worries me. It’s the knife-edge that makes F1 as compelling as it is, at times.

I’m cautiously optimistic. Even I can’t deny, seeing Seb in the red at Fiorano made me giddy, there is something just ultimately special about that Ferrari red, and why its able to attract so many brilliant drivers over the years, and you have no idea how badly I want this to succeed, as the selfish fan that I am, but boy, it’s daunting, and I fear whatever happens, he’ll be playing second fiddle to the incredible Mercedes team. Not to mention the other new starts coming up through the ranks in Valtteri Bottas and Daniel Ricciardo.

Bookies Manager, writer, podcaster and video maker for all things Motorsport. Loves sneakers, card games and sports, but refuses to stick to them.
View Full Profile
PrevPrevious PostWhy The F1 Superlicense Changes Are A Good Thing
Next PostDre’s One Question – The 2015 Formula 1 Season PreviewNext