“Sorry fans, your Italian’s in another castle.”

Well. That was newsworthy at least. Round 12 of the MotoGP season was at Silverstone, and a very wet one too, as Valentino Rossi responded to the pressure of Jorge Lorenzo again, by winning his 4th race of the season in a race where amazingly, he wasn’t even the most surprising Italian up the front of the field, as it was Pramac’s Danilo Petrucci who stole the show in 2nd place.

More on that, as well as Marc Marquez’s slim Championship hopes coming to an end further on, as well as a Moto2 race where Johann Zarco made another statement win, with Alex Marquez proving that Brno was no fluke. And in Moto3, Danny Kent became the first man since Barry Sheene in 1977 to win his home GP in Britain, as he strolled to victory in the wet race of attrition, in what could be the most underwhelming Moto3 race ever. All that and more, in my British Grand Prix Review! 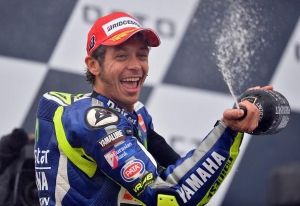 I always had a feeling we’d see more Italians on the podium this season, and we had an all-Italian podium for the 2nd time this season, as Valentino Rossi triumphed and dictated the race up the front when the rain came down, in a race that had to be restarted after everyone peeled into the pits due to a sudden rush of rain just minutes before the start.

He was chased by Marc Marquez, showing real commitment to try and keep Rossi in his sights, but crashed at Copse with a dozen laps to go, effectively ending the Championship. A real disappointment after Marc had tried to hard to get back into the title race, and with Lorenzo down in 5th at the time, it was a real open goal for Honda. A microcosm of their problems this season.

But the star of the show, without doubt, was Danilo Petrucci. He was being quoted as saying on Friday that he “liked England a lot, because it rains a lot”, and despite starting in 18th on the grid, he surged through the field, and eventually got up to 2nd place, and was gunning down Valentino until the final 3 laps. I dunno how that GP14.1 is so competitive in the wet, but I don’t care, it was a magnificent performance from Danilo.

Danilo has been slept on all season long. He was put on a 14.1 at the start of the season, compared to Yonny Hernandez’s superior 14.2, and has been thoroughly faster and consistent all year, and this was his reward. And he’s getting a 14.2 from Misano onawards, and it’s thoroughly deserved. One of the great surprise MotoGP performances, and it was a breath of fresh air to have a new face up the front of the field. Hopefully, a sign for the future. Genuinely delighted for him, and I don’t think any true MotoGP fan would have any other reaction. Here’s some more thoughts: 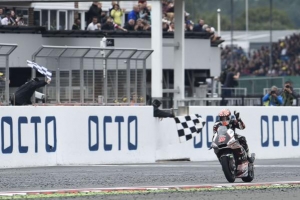 Wow. Johann Zarco just has no weakness. What an exhibition from the Frenchman as he controlled another race from the front, with no-one being able to provide an answer. His 5th win of the season, and his 11th consecutive podium, and all of a sudden, Rabat’s points record from just last season is very much under threat. The changeable conditions brought the best out of many a rider, and once again, it was Alex Rins who was the best of the rest, narrowly beating out Tito Rabat, who had shredded his wet tyre in the 18 lap race, a decent recovery after a nasty crash the previous day.

Another excellent performance from Baby Alien Jr., as Alex Marquez matched Brno with another 4th place. That podium is coming, for sure. It could have been tonight if it had not been for Xavier Simeon, who got in the way after trying to un-lap himself. I don’t think Alex will be sending any Christmas cards after the season finishes. Some more bonus notes: 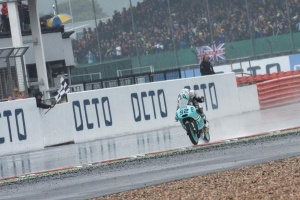 An absolutely critical win given the circumstances from Danny Kent. Enea Bastianini had taken 20 points out of Kent’s lead the last two rounds, and Danny needed a response, and he gave it in a dominant performance. Now, it wasn’t straight forward, as it was Issac Vinales who took the holeshot, but once Danny was clear upfront, he was 2 seconds a lap faster than his main opposite, which to everyone’s surprise, was another unlikely Czech – Jakub Kornfeil, managing his best ever finish in 2nd place. And how about Niccolo Antonelli – You wait a long time for a podium in your career, and then two come along at once! Yay, London man makes London buses joke!

This race though, had an enormous rate of attrition: SIXTEEN riders failed to finish, with a handful more crashing at least once before the end of the race, like Romano Fenati. The most notable of which, was championship contender Enea Bastianini, who binned his Gresini Honda with 2 laps to go, effectively ending his slim chances at the title. Here’s some more notes:

*No people, this wasn’t the all-time classic that many people are touting it as. Sure, it had a surprise outcome, but as a race, I guarantee you it will NOT age well. Rossi was completely unchallenged the entire race. If Jorge Lorenzo had won that race, we’d have called it a procession. I don’t believe in double standards.[/fusion_builder_column][/fusion_builder_row][/fusion_builder_container]