“Two down, one to go for the Rufea Gang.”

Hey folks, Dre here again and welcome to Sepang! Unfortunately, we didn’t really have a super exciting weekend, but given the way this season’s played out, I’ll take it – They can’t all be winners, kid. What we did get though, was Marc Marquez breaking even more records in a historic weekend for the 21-year old baby alien, Tech 3 having a superb day at the office all things considered, Tito Rabat becoming the 5th Moto2 World Champion as Maverick Vinales continued his scintillating run of form, and Efren Vazquez took his 2nd Moto3 victory with more controversy involved. Did Jack Miller go too far? All that and more, in my Malaysian GP Review! 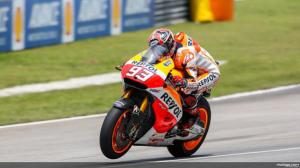 Is there any records left for this man to break? Despite the FP4 crash, a brilliant weekend for Marc Marquez for many reasons. Firstly, he broke Mick Doohan and Casey Stoner’s joint record for most pole-positions in a season with his 13th, and the 50th of Marc’s career. Yes, 50 poles in 113 starts. Nearly 50%. Yeah.

Then he tied Mick Doohan’s record for most wins in a season with his 12th, in an intelligent dogfight with Valentino Rossi that went on throughout the middle portion of the race. And it was a race where Rossi and Marquez looked right on the limit from the get go, taking wider lines and at times, really struggling to get the bikes stopped into the corners under heavier braking. Rossi just seemed to settle for 2nd in the end, with Jorge Lorenzo struggling on the harder front tyre towards the end in 3rd.

A shame that Dani Pedrosa had another awful weekend. This time a self-inflicted fall into the final corner, Sepang’s slippery track taking a top-level victim, in a race which had 6 retirements, rare for a dry race in MotoGP with only 1 multiple-bike incident. He got back up, only to drop again towards the end, after clawing his way back into the Top 12. As a result, he’s now cemented into 4th in the Championship, just the 2nd time in his 9 year career he’s finished outside of the Top 3. Dude just can’t catch a break, but I have to ask, how many times are we gonna give him a pass for something that was nobodies fault but his own?

Anyone reckon Marquez gets lucky 13 at Valencia? Hmm… 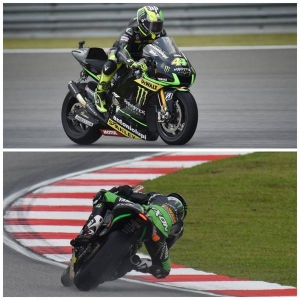 A really good day at the office for Tech 3, considering Andrea Iannone missed the race with an injury, and Andrea Dovizioso had a tyre-related meltdown at the end of the race.

It was another really good ride from Bradley Smith. Coming off his Philip Island podium, he finished in a great 5th place, and very nearly came in 4th in a last lap dogfight with Stefan Bradl, who was struggling for pace; Bradley trying the Capirossi style lunge into the final corner, but over-cooked it.

And some props for Pol Espargaro, who after having a NASTY highside in FP2, was questionable to race with a broken metatarsal. And despite a pain-killing injection, he got through the awful conditions and finished in 6th, a brilliant performance given the circumstances and a ride of true grit. Don’t let anyone be fooled, these MotoGP riders are tough bastards. Arguably, Tech 3’s best ride of the season. And would you believe, after all the criticism the man’s taken this season, Bradley Smith has a real shot at beating the Espargaro brothers to 6th in the Championship and the “Best of the Rest” award? Now that’s a surprise!

Shame Ducati had such a dreadful day, Andrea Iannone unable to race with an injury, along with Cal Cruchlow suffering an electrical failure, and Andrea Dovizioso suffering a fuel pump problem, losing about 6 seconds a lap. 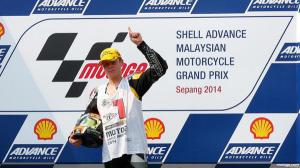 Congratulations to Esteve “Tito” Rabat on becoming the fifth, Moto2 World Champion. A brilliant achievement and a testament to the improvement and grind that Tito’s had to go through, throughout his career. Believe it or not, this was the first season that Tito didn’t have to PAY for his seat. Marc VDS believed in him and he delivered. The team deserves praise as well, they’ve been incredible throughout the season and most likely, will have 1st and 2nd in the Championship in a fortnight’s time. The team has over 500 points combined, a remarkable achievement.

He seemed to have a front tyre problem with the bike in Sepang, and only managed 3rd, but it was more than enough to seal the Championship. And very cool and unique to see that a World Champion in Moto2 will return to try and defend his title, something that’s never happened before with the Moto2 class – An actual #1 plate. Cool. And with Alex Rins and Alex Marquez both moving up next year, as well as the continued development of the 2014 rookie class of Jonas Folger and Luis Salom, and the established players of Dominique Aegerter, Mika Kallio, Simone Corsi, Sandro Cortese, Sam Lowes, Thomas Luthi, and more, the Moto2 category could be the most stacked its ever been next season. Can’t wait! 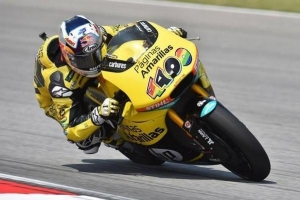 [/fusion_imageframe]Maverick avenges his Malaysian Past

Anyone want to argue that Maverick Vinales is the best in class right now? Imagine if he stayed for next season? What a terrifying thought that would be for the rest of the field. Maverick sealed his 4th win of the season in a great fight with Mika Kallio, who he broke towards the end of the race, making it his 3rd win in the last 4 races, and with it, he broke Marc Marquez’s rookie points record from 2011.

Maverick has been in incredible form lately, and you have to think, if his run of form after Texas was a little better, he very well may have been a title contender, a shame given just how amazing Marc VDS has been, but as James Toseland said on BT Sport’s coverage, I just hope Suzuki give Maverick a capable package to keep his confidence going. Considering where Maverick was just 2 years ago, quitting on his team he accused of being uncompetitive, he’s come on such a long way, maturity, to go alongside his undisputed, incredible talent. For talent in the sport now, I suspect only Marc Marquez has more. 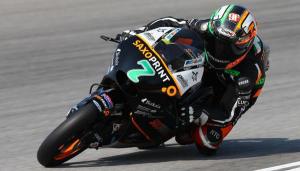 Yet another ridiculously close finish in Moto3, with just a second covering the Top 6, and through the craziness, it was the experienced head of Efren Vazquez that came through to take his 2nd career win, ahead of Jack Miller’s awesome 2nd place (Quite the achievement given his KTM and the nature of the track), with Alex Rins trolling his teammate by finishing 3rd, Alex Marquez the Champion-Elect in 5th. Got to remember, Vazquez is currently unemployed, so he’s riding for his job, and he looked like he really did.

But it wasn’t without yet more Moto3 controversy, with Danny Kent and Jack Miller in particular being called to Race Direction after the Galicia team protested over the several moments of contact between Miller and Marquez throughout the race. No further action was taken, and essentially, the Red Bull boys were cleared of any wrongdoing.

Did Galicia have a claim? In my eyes, nah, not really. This is Moto3, the division we applaud for being bonkers, and wheel to wheel racing for entire GP’s, but a bit of contact’s too far, and Miller’s playing dirty? Please, this is racing. It’s not a non-contact sport in MotoGP. Where was the disdain for the Marquez/Miller crash at Aragon? Or Marquez bumping Lorenzo at Jerez 2013? Or Rossi/Gibernau at Jerez 2005? Or even John McPhee blatantly using his elbow during the very same GP? It’s blatant double standards, and I’m not blaming the team or the fans for this, I’m blaming the stewards for being inconsistent. Remember Romano Fenati in Argentina?

I suspect this whole deal was essentially EGO,O having sour grapes that Alex Marquez couldn’t win the title this morning, more than anything else. A hail mary. Jack Miller was hard, but fair, and I think Alex Marquez needs to toughen up his racecraft, he’s been beaten out for 1st on WAY too many occasions this season, where he could have had the title wrapped up by now.