Episode 3 of The Grand Tour has the boys actually do “A Grand Tour”, in which Richard Hammond thinks he’s in a Gumball Rally. Apparently, the jokes write themselves.

Hello everyone, and welcome back to Dre’s Grand Tour, the series where I re-watch The Grand Tour and see how it stacks up under my critical eye. Last time, an action movie stood in for Clarkson, Hammond, and May, and it was shit, borderline racist and generally unfunny. A bit like Top Gear since 2013 really.

Anyway, time for Episode 3, as the tent heads to Whitby, England and the boys actually go on a “Grand Tour”. Sort of. You’ll see.

The intro sequence has the boys in Jensen Interceptors. A nice touch. By now, the show’s established its intro, and it has three main running jokes:

As said, the show’s filmed in Whitby this week, in Yorkshire. Luckily, this week, they keep the comedic intro rather short on this one, only going as far as debating whether Northern leftover fryer batter is “bits” or “scraps”. I’m from London, so I literally couldn’t care less. #SouthernFairy

The show’s main segment starts with Jeremy and James recreating their own modern “Grand Tour”. You see, a “Grand Tour” was what many people would do in the past as a big adventure, often learning a new skill while traveling through multiple cities. And I’m sure there’s a bunch more interesting stuff on that if you’re willing to Wikipedia it. In this case, Jeremy and James were going to start in Tuscany in Italy, and travel through Bologna, Verona and finishing in Venice.

James had chosen the new Rolls-Royce Dawn, and Jeremy in an orange/brown Aston Martin DB11. Nice choices. The colour of Jezza’s DB11 is a running gag in the segment, which would be funny except the car is CLEARLY orange. 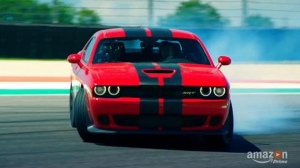 And all of a sudden, Richard Hammond rocks up in a 700bhp, upgraded Dodge Challenger Hellcat. Why? Because they have to basically ham-hock a Gumball 3000-esque segment into this one, and because Hammond’s the youngest and basically American, kaboom. Shoutout to his sponsor: “Lube N’ Tube”, which made me laugh any more than it had any right being because I am really immature at heart. Sorry.

Oh, and doubling down on this, Hammond’s brought a second truck with all his “spare tyres”. I think you can see where this is going.

We get a bit of Clarkson talking about the new DB11, and it’s pretty nice. I had no idea that Aston had done a deal with AMG, and that there’s a lot of Mercedes nods in it. Similar deal with James in the Dawn car. Rolls with the more British outside influence, but with the more German hi-tech efficiency in the bonnet.

Richard was basically being a yob. Revving his Dodge relentlessly, especially in tunnels. It’s infuriating to James… And it’s actually kinda funny seeing Hammond being a big kid… Although I’m not sure how much of that is scripted.

“It’s like someone violently being sick while you’re trying to read a nice book.” – James May

Clarkson and May are in one of the art chapels… And Hammond was outside doing donuts. You have the narrative here. Clarkson threatening to de-skin Hammond made me smile, though.

To settle a performance debate between Hammond and Jezza, they head to Mugello for some hot laps. Another great line from Jezza: “You know Jaws? Really, really big man? James Bond threw him out of the window”. I love 007, so I’m a sucker for it.

I can’t lie, Hammond’s Challenger is awesome entertainment. The burning smoke coming off the tyres, and the power sliding is fantastic. Lovely to see Jezza getting the back out on that DB11 as well… As James takes up some watercolour, because on a “Grand Tour”, apparently you try to enhance your own skills. Maybe one day I’ll learn to video edit.

Clarkson’s DB11 was three-tenths faster. “140 years of independence and that’s the best you can do.”, another surprising gem. As Clarkson joined May for some more painting, May starts twitching as Hammond graffiti’s a board with spray paint like something out of Infamous: Second Son.

Back to the studio and “Conversation Street”, and coal is mentioned a lot. Pretty interesting discussion about a chronic shortage of people taking driving tests and learning. As a London guy, let me tell you, in Central London, driving is so shit nowadays and it’s so expensive to get on the wagon now, that learning is almost redundant if you live in a city. Spending all that money on lessons, a car, petrol, and insurance… Why? Especially with me given I work 15 minutes away. There’s also some crazy shit about how you apparently need £10m to shrink a roundabout. Ha.

Back to Italy for THE Grand Tour Part 2, and Hammond is escorting his two trucks off the hotel lawn. Yay. Oh yeah, Rolls PR statement about their car was total horseshit. I still find it kinda weird that the show doesn’t just straight up say “Wanker” as opposed to gesturing with their arms… Yet they joked about not being able to say “prick-teaser” and describing one part of the DB11’s interior as a “lady part”, and have no problem saying “Shit”. Weird. 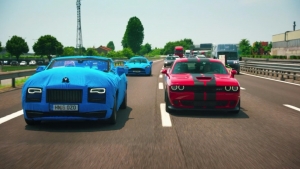 Jezza and James go to eat and see a play, as… Hammond returns to powerslide outside. Day 3, the boys try to escape again in the morning, but Hamster comes back from a morning run. They run off anyway, but with those photo proof sheets that car manufacturers make when testing cars at the Nurburgring. Also, Hammond cut his picture in half, and that made me sad.

Another plan and this time Clarkson and James tweet out that Hammond will be in the town square, and then drive in… and yeah… THOUSANDS roll up and box him in as the others drive off. I do remember this being a real tweet and it is hilarious to see him boxed in.

The others finally get to Venice the next day and get on a Gondola. And guess who… Richard Hammond shows up in a powerboat and makes them fall out like that scene in “Mamma Mia: The Movie” where Julie Walters fall out of the boat. And then the whole film ends? Oh, okay. More on that later.

Celebrity Brain Crash, and Simon Pegg “dies” as he falls into a river. Woot. Instead, to fill in the time, Clarkson claims he’s made his own version of a self-driving car like what Google are doing. It’s a Septic Tank with a camera and a monitor underneath. Oh wait, here’s the punchline – It’s got a Romanian immigrant in the bonnet. Haha, a topical joke. Sigh.

To end the episode, the follow-up to Episode 1, because the McLaren P1 was “last” around Portimao, Hammond and May got to blow up his house. Not to repeat me too much, but Facebook spoiled this joke in advance when they announced that Clarkson got planning permission to build a new house on his land on Chipping Norton. Basically, Hammond is an oaf, May is methodical, Jeremy likes Shakira and his house goes boom. End of episode.

Goddamnit, this is a frustrating one. Y’know why? The show went on too long. If it had ended at the end of the Grand Tour segment, I’d have probably given this episode an 8.5 out of 10. But there were some problems.

First up, the Grand Tour segment itself. I openly admit, I enjoyed it a LOT more on the second watch. Hammond’s deliberate obnoxiousness was genuinely more entertaining than frustrating compared to the first time I saw it. The only real issue I had with it was just… the whole thing felt so inconsequential. They didn’t really learn anything on their “Grand Tour” and the whole second half just became a matter of finding ways of dropping Hammond… WHO THEY LET JOIN THEM IN THE FIRST PLACE. Add the whole sudden ending and no real conclusion made about the cars or the trip itself and the whole thing just felt kinda… there. 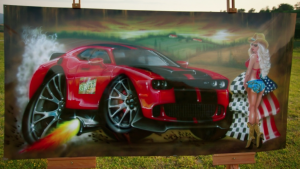 “Conversation Street” was the best one so far with some genuinely interesting topics involved, but the last 15 minutes dragged it down. CBC is trash, that’s been established, but knocking down Jeremy’s house was a joke they maybe should have done at the end of the series to remind people of it, rather than 2 weeks later. I get it, but the whole thing just felt like time filler. Speaking of which, the Google bicycle car segment was dreadful.

This episode is proof that sometimes less is more. You’re on the Internet, why does your show need to be 60 minutes? I’d rather have 45 minutes done well than 60 and you’re struggling to make something fit in the time you feel like you have to fill. It’s a shame because this is still the best episode to date, but I’ve already spent 20 minutes writing this section of criticisms. Bollocks.

Don’t let those previous two paragraphs drag your opinion down too much, I did genuinely enjoy the majority of the show, and as said, actually enjoyed it more second time around. We’ll quickly find out though that my enthusiasm didn’t last long, as next week the tent stays in Whitby as the boys go “Enviro-mental”. With horrendous results. Until next time, Dre’s out.