“The coronation of one of the greats.”

Well… That was okay, wasn’t it? The Circuit of the America’s has produced an all-time classic race, a wet to dry drama filled fest from start to finish, with Mercedes being caught in an early dogfight with Red Bull in the wet, and as the track dried out, Sebastian Vettel and a Safety Car brought him into play, and we got a dogfight for the win, all race long, and a fight in the midfield for some really high positions.

This was a race that could easily have never happened. The threat of Hurricane Patricia loomed large, and COTA’s weekend was ravaged by a ridiculous amount of rainfall. FP1 was a near washout, FP2 didn’t happen at all, and with the threat of FP3 counting for Quali due to foreshadowed stormy weather, drivers were forced to push, something that sat very uneasy with me. We had Quali, but only 2 sessions, and yeah, the morale amongst the fans would have been low, if it weren’t for some of the awesome stuff the crews were doing to pass the time. A truly wonderful moment and a nice reminder that F1 is a family, and that we can have some fun every once in a while. 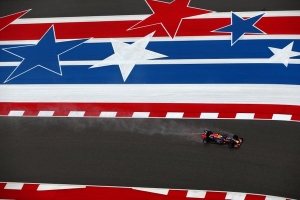 [/fusion_imageframe]As for the race itself, it was amazing how fast the track dried out after the amount of rain COTA had, a credit to the facilities. I loved the early going of the race, Hamilton doing another very aggressive pass on Turn 1 to overtake Rosberg, and the Red Bull’s coming out swinging in the rain, and even punching Lewis in the nose a couple of times, Daniel Ricciardo with a reminder of his class.

Then the slicks came out, and the Mercs re-asserted their dominance. Rosberg took off, the Red Bull’s sank backwards, and Sebastian Vettel came alive with some scintillating laps, then there was a safety car for Marcus Ericsson’s retirement, and the tactics came into play, with the Top 4 staying on soft’s, and Vettel rolling the dice to run the end with his prime’s. A strategy that was looking decent, until a 2nd Safety Car came out for Danill Kyvat hitting the wall. A strategy that was looking like ruining Hamilton’s race, ended up being what won it for him… that and the near spin Rosberg had with 6 laps to go, that cost him the win, and the Championship.

Lewis Hamilton deserves all the praise he’s gotten. He’s had an absolutely tremendous season, and has been ruthless in perfecting his weaknesses and just dominated this season from start to finish, and as the great Gary Player once said: “The more I win, the luckier I get”, something I feel could easily apply what’s been a magnificent season. Lewis, no question, is one of the greatest drivers to ever grace this sport. 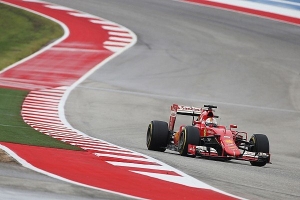 [/fusion_imageframe]On this day though, there was so many other fantastic performances. Sebastian Vettel started 14th on the grid, but his relentless pace, mixed with a superb strategy call from Ferrari, had him tear through the field enroute to 3rd, and was just a lap shy of 2nd due to a vulnerable Nico Rosberg on overused tyres. His best drive of what’s already been a sensational season from the resurgent German. He’s already surpassed his nemesis Daniel Ricciardo’s points haul from last season. Hopefully, that season is now put to bed in terms of questioning his class.

A superb day at the office from Toro Rosso. Max Verstappen was racy all day long, mastered the track enroute to matching his career high in 4th, an Carlos Sainz moved up 13 places to finish in 7th after not being able to qualify on Sunday Morning. Perez, the king of opportunity, back in the Top 5, and Jenson Button in 6th place for his best result of the season, Alonso very unlucky to have not joined him, his new-spec Honda engine dying right at the end. 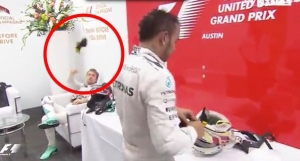 [/fusion_imageframe]All in all, this weekend in Formula 1 was FUN. You heard that right? Fun. It makes it a real shame that Lewis Hamilton needlessly throwing Nico’s 2nd place cap at him in Parc Ferme overshadowed a lot of that. For what it’s worth, I don’t think Lewis was malicious in that, and Nico was classy in congratulating Lewis afterwards beforehand (Something a lot of people selectively missed), but the whole thing was handbags, like something Diego Costa practises on a weekly basis. It’s a shitty trait of the F1 media, thinking that a cap being thrown will sell more than what was one of the races of the decade.

Like I said, this weekend was FUN. And given all the crazy shit that happened before Sunday afternoon, at many points, I didn’t think this race was going to happen. It turns out, we had one of the greats, and the crowning of one of the greats. Fun in F1 can often be an oxymoron. Yesterday, was a nice reminder of how great this sport can truly be. It’s like the drunken Uncle. He gets on your nerves and is petulant as fuck sometimes, but deep down you love him, and you just long for the good times more than get mad at the bad. Wow, that was deep for an F1 column.

Anyway, go watch this race. It’s one of the best I’ve ever seen, and is everything that makes this sport great.

Bookies Manager, writer, podcaster and video maker for all things Motorsport. Loves sneakers, card games and sports, but refuses to stick to them.
View Full Profile
PrevPrevious PostRossi vs Marquez, Alien vs Predator
Next PostDefending The IndefensibleNext