“Alas, poor Rosberg, I knew him. In America.”

Hey folks, Dre here again, and its time to review what happened in yesterday’s United States Grand Prix from the Circuit of the Americas in Austin, Texas. In our 3rd visit to the place where everything’s bigger, Lewis Hamilton won his 5th consecutive race from Nico Rosberg in 2nd, Daniel Ricciardo scoring his 6th podium of the season in 3rd, ahead of the Williams. But this was a race where the midfield provided most of the action, with Button and Alonso going to war, Toro Rosso and a surprisingly competitive Lotus went scrapping, and Sebastian Vettel’s late charge through the field provided a lot of the fun. Let’s break it all down, with my United States GP Review. 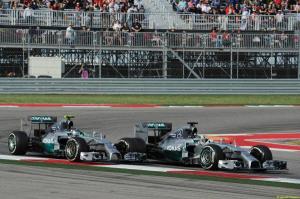 [/fusion_imageframe]Game, Set and Match for Hamilton?

It may not be the end, but it’s certainly looking close. Stop me if you’ve heard this one before, but Hamilton was just a little bit better on the day than Rosberg was. It was very similar to the Hamilton vs Vettel showdown here during the 2012 race , two prizefighters beating the tar off each other for lap after lap. They were practically identical for 95% of the race, but Hamilton was just a little bit better, surprising Rosberg with a bold move into Turn 12, which was hard, but ultimately, fair, Rosberg being good enough to give Hamilton the room, despite running him off track slightly.

With that 5th straight win, it takes Lewis Hamilton to 32 for his career, the most in British racing history, and on the brink of becoming the country’s first Double World Champion since Sir Jackie Stewart. He’s now 11-6 head-to-head in races against Rosberg, and 10-4 in race wins, it’s becoming more and more obvious that Nico just isn’t in Lewis’ league this season, despite the sort-of close Championship fight at 24 points. Of course, Double Points are still the dark cloud looming large, but it’s looking like only reliability, or another freak instance will alter this Championship now. A shame after Rosberg’s frankly OUTRAGEOUS qualifying lap to seal him the Pole Trophy and a new circuit record. 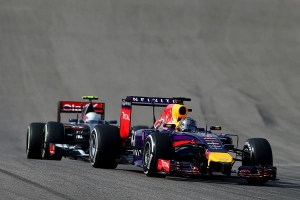 [/fusion_imageframe]The Running Of The Bulls

Just how freaking good is Daniel Ricciardo? On paper, there was no way he should have finished 3rd ahead of both Williams, but he found a way to make it happen. Another superb drive given the track isn’t one on paper that Red Bull should be strong around, and he pulled off a brilliant pass on Fernando Alonso on the way there as well. Sadly, mathematically, he’s out of the running for the Championship now, but his season is Driver of the Year worthy, without any shadow of a doubt. Can Williams stop “dun goofing” on their pit stops please? Not the first time this season…

Again, stop me if you’ve heard this one before, but it was a different, but slightly more entertaining tale for Sebastian Vettel. He had to start from the pitlane after using his 6th Power Unit, and struggled early on, Dr Marko admitting that Vettel was on a bad batch of medium tyres to start the race, ultimately costing him at least 15 seconds, as the team were trying to do a “Sochi” and run him through the entire race on one set of tyres, which was impossible. So they switched to a 3-stopper mid way through, and after being caught with a traffic jam behind him with 12 or so laps to go, switched to the options and went on a TEAR, carving his way through the field, setting the fastest lap of the race, and finished in 7th, just half a second behind Fernando Alonso in 6th, a confusing state of affairs when the leading Ferrari was NINETY SECONDS off the win, not to mention when Hamilton crossed the line, there was a ton of racing in the midfield still going on. Weird, but also kinda cool, even if it shows the divide between the top and midfield.

Sebastian still has a shot at 4th in the Championship and is only 7 points behind Valterri Bottas with two to go, so that fight between him, Bottas and Alonso is looking to go down to the wire. Keep an eye on it, it could be fun. 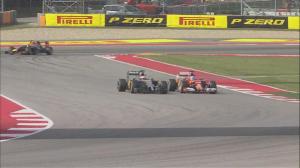 That midfield was fun though wasn’t it? Jenson Button and Fernando Alonso are wrapped up in their own driver and seat changing merry-go-round, but they had a great scrap in the early stages of the race, Alonso just winning out in the end. Could they be future teammates? If they fight like this, can we make it happen please?

A lot of the action came down between the Toro Rosso boys of Vergne and Kyvat, and Lotus, with Grosjean and Maldonado, Lotus looking as competitive as they have all season, properly mixing it up for the points again for the first time in a while, and they made great use of the DRS zones and the twisty final sector, and it lead to some great racing.

Unfortunately, it got a little ugly in the end, as Vergne hit Grosjean’s car after a divebomb lunge into Turn 1, the damage causing Grosjean to run wide everywhere, cruelly keeping him out of the points. It benefitted his teammate though, as Pastor Maldonado’s speeding in the pit lane penalty was cancelled out by Jean-Eric Vergne’s 5-second time penalty for causing a collision, Maldonado getting bumped back up to 9th and Vergne taking the final point in 10th.

More of this in Brazil please boys, it’s not like the action up the front is amazing at present…

Kimi Raikkonen? What the hell man?! As much as people want to shine a light on Sebastian Vettel for his mediocre season (By his incredible standards), why does Raikkonen get a pass for scoring nearly 4 times less points than Fernando? And again, he was blasted by his teammate, 28 seconds down the road, and lapped by the Mercedes drivers.

I understand he had the issue with adapting to the new brake-by-wire systems, but we’re 17 races in now, that excuse doesn’t wash. This is a very different Kimi than the one dragging the Lotus to punch well above its weight in 2012 and 2013. Is he not motivated? Is the car really that bad and Alonso’s just been that brilliant this season? Both? Because without mentioning his past glory, can anyone give me a legitimate reason why Kimi Raikkonen should still have a job at Ferrari right now? Because if I’m Sergio, I’m giving Nico Hulkenberg a call to see if he can break that Force India extension… 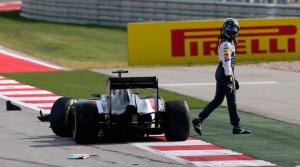 Adrian Sutil just can’t catch a break. A brilliant job to Qualify in 9th and get his first Q3 appearance of the season, and this time, Sergio Perez lunges in, a situation where he has about a minus 10% chance of passing, and collects Adrian Sutil in the process, who to this day, still hasn’t completed a racing lap at COTA. Poor guy.

Sergio got a 7-place grid penalty for Brazil as a result, and he has no-one to blame but himself on this one. Considering the performances of Force India and Sauber this weekend, they might as well have boycotted. At least the repair bill wouldn’t be as high.[/fusion_builder_column][/fusion_builder_row][/fusion_builder_container]