“Toni Elias’s moment in the sun…Or clouds, to be more realistic.”

Hey folks, Dre here, and time for something a little more, shall we say… retro? I’ve always wanted to look back and take another look at some classic races from yesteryear, and profile them on my website. Here’s the first in this brand new series, and to open up, I’m looking at what many say is the best MotoGP race of the modern era, and one where Toni Elias got his one, and only Grand Prix victory. Yep, THAT race. It’s Estoril 2006. So, before we get started, let me fill you in on a little history… 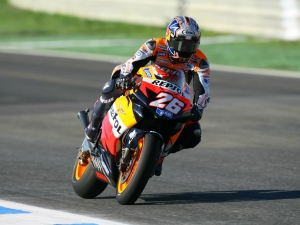 2006 was an interesting season in MotoGP. Valentino Rossi was with Yamaha, and while he was still generally considered the best rider in the sport, an unreliable bike meant he opened up the door for other riders to challenge for the title.

By the time Estoril rolled around as the penultimate race of the season, 5 guys were still in mathematical contention for the title; Valentino Rossi as defending champion was 12 points back from Nicky Hayden, with Marco Melandri, Loris Capirossi and rookie Dani Pedrosa still in play, close behind.

In Qualifying, a new lap record from Valentino Rossi had put him on pole ahead of his team mate, Colin Edwards, with Nicky Hayden sharing the front row. On Row 2, it was the rookies of Dani Pedrosa and Casey Stoner with John Hopkins for Suzuki in 6th. 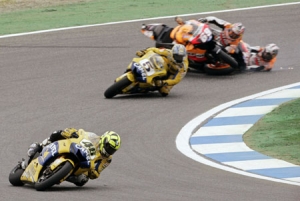 It was pretty straight-forward hole-shot for Valentino Rossi at the front as he lead the early going, but he was kept in close company by teammate Edwards, and the two Repsol Hondas of Hayden and Pedrosa, with Elias, Stoner and Gibernau leading the 2nd group.

It all started getting a little hairy early on, Shinya Nakano failed to complete a lap, dropping hard and needing to me carried off on a stretcher. The following lap, Casey Stoner low-sided his bike and crashed, the aftermath collecting Sete Gibernau in the process, the 3rd injury he’d suffer in the season to date.

The Top 4 was breaking off as a leading pack, then all of a sudden on Lap 4, into Turn 6, Dani Pedrosa drops it entering the corner and poor Nicky Hayden gets taken out in the process. Hayden did a FULL Luis Salom style bitch-fit in the gravel afterwards, seething in rage at Pedrosa collecting him through no fault of his own. Can’t say I blame him, with Rossi leading, you’d think his title chances had gone up in smoke.

I was worried at this point Rossi would just ride off into the sunset, but it turns out, the 2nd pack were showing great pace too, with Toni Elias and Kenny Roberts Jr getting forward and joining the Camel Yamaha bikes to make it a leading pack of four. 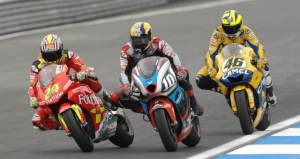 [/fusion_imageframe]What was also fun to watch develop was Toni Elias clearing Colin Edwards with a signature move, like something out of a Street Fighter game. Into Turn 6, Elias would deliberately break SUPER late, running wide and intentionally missing the apex, but cutting back in through the 2nd half of the corner and getting a slingshot out of it. No-one else did it, and it made any unknowing fan shit their pants in the process. Awesome!

Roberts eventually passed Edwards with about 8 laps to go. Edwards had looked half threatening, but never seemed to really attack anyone ahead of him and just seemed to settle for 4th in the latter stages.

However, Toni Elias and Kenny Roberts were much more aggressive about the idea, first Elias taking the lead for a lap or two, then Rossi taking over again, then with 2 laps to go, Kenny Roberts pulled the pin, and took the lead, trying desperately for what would be his first EVER MotoGP era victory, and his first since the year he won the World Championship, back in 2000! 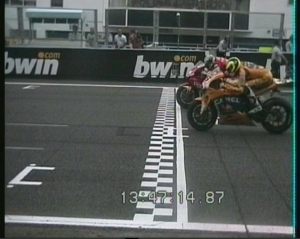 [/fusion_imageframe]Problem with Roberts though, was that he went too early, and he got totally annihilated under braking for Turn 1 on the final lap, with Rossi coming down, it was 3-ride, and ELIAS had passed BOTH of them on the far left, in a truly INSANE move, worthy of winning a race itself. Rossi was now 2nd, but came back with a stunning pass of his own, taking the deeper and tighter line through the uphill chicane…

Now, true story here – The first time I watched this race live, I told my Rossi supporting Dad: “Watch Elias on the last corner.” He didn’t listen to me, and I noticed the start/finish line is quite far down the home straight, so if Elias could get a good run out of the final long right hander…

…Guess what? He did. The Honda was always the faster bike in a straight line, and in a drag race to the line, Elias got the photo finish win over Rossi by just 0.002 of a second. Literally, the length of a CD Cover. Roberts was 3rd just a tenth back himself, Edwards 4th, and 5th placed Makoto Tamada was EIGHTEEN seconds back. 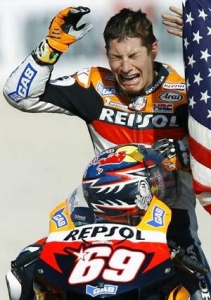 Remember how I said Valentino had a ridiculously unlucky season? Well, it was topped off by him getting tagged in the season finale in Valencia. He was able to keep going but finished down in 13th, with Nicky Hayden coming 3rd, winning him the World Championship by just 5 points.

Worked it out yet? Yes, that’s right, Toni Elias cost Valentino Rossi a 10th World Title, because if Rossi had won, he’d have won the title on countback, 6 wins to Hayden’s 2.

Nicky Hayden would never reach the Top 5 of a Championship again, many calling to question his talent as a result, while Rossi would go on to win two more World Titles in 2008 and 2009. Kenny Roberts hung up the leathers the year after, failing to win a GP after his 2000 World Title.

Okay, let’s be real here, no race is ever going to hold up quite so well on the 2nd watch. So I have to be relative here with my thoughts. I had another disadvantage going in, and that was, I didn’t get Eurosport’s coverage on the video I downloaded. A shame, as Toby Moody, Julian Ryder and Randy Mamola are one of the best trio’s in Motorsport commentary, and they went POTTY when this race was live.

But taking it for what it is, it still holds up REALLY well. This race had a lot of drama, from Stoner and Gibernau early on, from Pedrosa taking out Hayden and the consequences that nearly ruined Hayden’s Championship, the emotion on Hayden’s face was insane.

The shock value of Toni Elias having cojones the size of watermelons was awesome, he was BONKERS in this race and the double pass on the final lap was one of the best moves I’ve ever seen in this sport. Just having Kenny Roberts back up the front as well as a nice look, rather than the usual contenders at the time. The slippery track added some nice tension in there too.

This wasn’t the best race battle that MotoGP’s had, that may be done in a future episode (Laguna Seca 2008), but for an overall spectacle, this is right up the list. If you’re a newer MotoGP fan, try and find this one, it’s still an all-time classic and a great showcase for just unreal this sport can be at times.

Got any other suggestions from F1 and MotoGP you’d like me to re-watch? Let me know in the comments, and until next time, thanks for reading!

PrevPrevious PostDre’s MotoGP 2014 Grand Prix Of Aragon Review
Next PostJules Bianchi: Why We Need To Look In The MirrorNext

Dre Harrison, 28 year old Bookies Manager and hobbyist Motorsport journalist. Lover of sneakers and sports, but refuses to stick to it.
View Full Profile
PrevPrevious PostDre’s MotoGP 2014 Grand Prix Of Aragon Review
Next PostJules Bianchi: Why We Need To Look In The MirrorNext