Dre vs Dre: Is Lewis Hamilton “Good” For F1?

Nothing like having a conversation with yourself about the biggest name in Motorsport. But is he actually a good thing for the world of Formula 1?

Hey folks, Dre here with a brand new series on this here website. In this new series, I was obviously inspired by Jeremy Scott of Cinema Sins, and his recurring series: “A Conversation With Myself”. A series, where Jeremy would edit two separate videos of himself shot in the same room, then merged together to make it look like he was actually talking to himself. And I thought, why not do something similar with myself and some cool Motorsport topics. In this first one, both sides of my personality debate about the presence of Lewis Hamilton, and ask, “Is he good for F1?”

Now, for what it’s worth, Dre 1 likes long walks on the beach, ice cream and Sebastian Vettel, while Dre 2 does nothing but watch 90’s re-runs of Robot Wars, Yu-Gi-Oh and The Fresh Prince, and watches WAY too much Darkest Dungeon on Twitch.

Dre 1: Okay Dre, we’re talking Lewis Hamilton. Apparently, no-one else ever does that in Formula 1 anymore. But anyway, do you think the guy’s an overall good guy for Formula 1 going forward? It goes without saying that he’s pretty much THE GUY now he’s landed F1’s “Golden Ticket” of being in a dominant car, and is the biggest star in the sport now, and by any measure, he’s one of the greatest ever…. 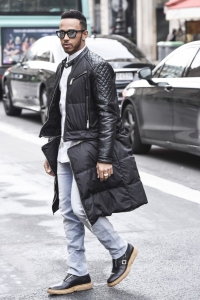 Dre 2: …I’m kinda done with Lewis. That very stardom’s kinda made him over-saturated now, don’t you think? It’s gotten to a point now where he’s micro-analysed for EVERYTHING, now. Not to mention, he dresses like Harry Potter started wearing his foster parent’s curtains.

Dre 1: I can’t lie to you, the nitpicking for his fashion sense is a little tedious, but that’s only because he’s talked about so much, no? And besides, why do we as F1 fans even care about that so much? Like, really, unless you’re a fashion student, why do you care so much about what he wears?

Dre 2: Because it makes him look like a damn fool. How can F1’s biggest star look like a damn fruitcake? He’s representing the sport, whether he wants to or not. He comes across more like a Kardashian member, doing anything for attention, and coming across like he’s invincible. Like, does anyone EVER tap him on the shoulder and say: “Lewis, shut up, you sound really stupid right now?”

Dre 1: Look, I ain’t saying he’s no saint. I was the very first guy to call him out when he made a complete Dog’s Dinner of Justin Wilson’s minute of silence, and heck, last week’s “Halo” comments were one of almost sheer naivety, but I think it’s kinda obvious that this is just the “Lewis”, that’s been held back for all these years. Be real here, do you HONESTLY miss “Corporation Lewis”? Looking back, he was boring as hell, whipped by the McLaren code of Ronspeak.

Dre 2: Okay, that’s a valid point. Just one problem here, when do we all turn on him, like we did with Sebastian Vettel? Lewis has now completely dominated the last 2 seasons. First driver to ever win in double digits back-to-back. We all know the F1 audience is a fickle one, and we always eventually turn on drivers who dominate because our bloodlust for entertainment makes us desperate to see someone new at the top. Heck, even Michael Schumacher got some backlash by the time 2004 came around, so much so, they changed the rules to cripple him. When will we reach the breaking point with Lewis? 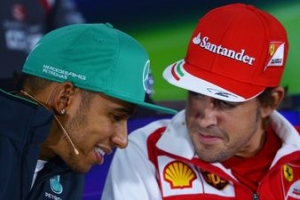 Dre 1: I honestly think we’re already there. Have YOU seen the begging for Vettel to be the kryptonite to Gangsta Superman here? Lewis is unique in that regard because he has one very important thing going for him here – He’s British. And that patriotic support of “Support any son of a bitch who’s British”, is a nice weapon to have at his disposal, especially given Jenson Button isn’t relevant any more due to Woking shitting the bed for the last three years.

I hear you, Lewis definitely has that vocal minority who can’t stand him, but that’s not entirely a bad thing. Look at John Cena. Even if you hate his gimmick, he’s been at the top for what, 11 years now? A lot of that is because even if you can’t stand him, you care by reacting to his every move. Is that fair to say?

Dre 2: You mean those same British fans who mock him half the time for… Not being British enough for them? Let’s be real here, he’s basically our distant American cousin now. The guy frigging bailed on the BBC to go on a US whistlestop tour. Kimmel, 60 Minutes with his generic mixtape, Corden… Actions like these, even if harmless, are only going to alienate our more xenomorphic hardcore fans, no?

Dre 1: Again… Not sure that’s a bad thing. Surely, it’s a good thing he’s out there promoting the sport in the United States? The US has got INCREDIBLE potential as a market, and him loving the American culture could easily make him tap into an audience that F1 drivers can’t do. He hangs around with Kanye, Kimmel (Who loves his sport), and others, and look at how crazy we all got at COTA’s announcement yesterday that Taylor Swift is coming down for the GP in October!

Dre 2: …Is this good for F1, or good for Lewis Hamilton: The Brand? 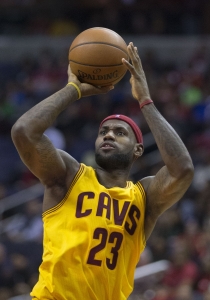 Dre 1: Both, surely? Of course, Lewis is in it for himself. If it promotes the sport too, that’s gotta be a bonus, no? F1 needs a transcendent sporting star, to carry the torch. We haven’t had one since Schumacher. Sebastian had the potential to be that guy, but he chooses to live a quiet life outside of the limelight (Which I still don’t know how he manages it, frankly).

We’ve said it before on here, having a guy like a Federer, a Rousey, a Ronnie O’Sullivan, a guy who can crossover and pull in the casual punters is the best thing the sport can have, right? Not to mention, Lewis looking out for “his brand” is what more athletes SHOULD be doing. It’s basically the gospel in the States, from LeBron’s shoe line to JJ Watt pretending to be Captain America.

Dre 2: Yeah, I can’t lie, that’s probably a good thing on the whole. I just wish he’d straighten himself out a lot of the time. I’ll be the first to admit, the star potential in Lewis is greater than anyone to hit F1 in 30 years. Not since James Hunt has an F1 driver really captured the imagination of the British public, and Lewis could be that guy. But he makes himself an easy target with some of his behaviour, even if he doesn’t mean it. I know deep down, he’s not truly a bad person, just one that has the whiff of… naivety?

Dre 1: You criticize Lewis for extra-curricular activity and use James Hunt as your yardstick?

Dre 2: Would YOU say no to Natalie Dormer in a nurses’s outfit though?

Dre 1: Fair point. But come on, don’t you think we don’t talk about Lewis enough given his achievement? I mean, the dude has 3 World Titles and 43 Wins. He’s going to surpass Ayrton at this rate, who is THE untouchable driver of yesteryear. He’s an outrageous talent and we should be getting behind him more.

Dre 2: You’re right, we should. But we don’t live in that kind of society. We live in a society where Kim Kardashian can get 130,000 RT’s for something we’ve already seen. Good luck talking about things that actually matter.

Dre 1: Still, could be worse. You could be Sharon Osbourne.

Next week: Is Ayrton Senna overrated?

PrevPrevious PostDre On The Laureus Awards: Male Sportsman Of The Year
Next PostFormula E’s “Short Circuit”Next

Dre Harrison, 28 year old Bookies Manager and hobbyist Motorsport journalist. Lover of sneakers and sports, but refuses to stick to it.
View Full Profile
PrevPrevious PostDre On The Laureus Awards: Male Sportsman Of The Year
Next PostFormula E’s “Short Circuit”Next