For once, a Mercedes 1-2 REALLY didn’t tell the full story.

“You can’t keep a Mercedes down, sport.”

And the Formula 1 season is back! And it didn’t suck! That in itself is an achievement in its own right, especially given the general feeling after yesterday’s ridiculous change to the Qualifying system. Isn’t it amazing how F1 just seems to pull these kind of races out of the fire, often in the face of adversity. But one thing still remained – F1 is a sport where 22 guys take 22 cars around a weirdly shaped oval, and in the end, Mercedes won. But boy, did they have to earn it. 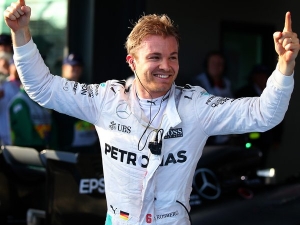 Mercs won a Strategy Battle. What?!

I know, I’m as shocked as you are! Mercs clearly have to work on their clutches, because it was another dream start from Ferrari as Vettel had the early lead, Hamilton stuck in 6th and Rosberg 3rd. But after that enormous Alonso/Gutierrez wreck, the Red Flag was pulled out. Ferrari kept the new set of Super Soft’s on Vettel and Raikkonen’s car, while Mercedes decided to run to the end on their mediums.

Turns out Mercs made the right call, Vettel ultimately not having the speed to break Rosberg on the Super Soft’s and had left it too late to recover on the new Soft Tyres at the end, the dirty air probably saving Hamilton’s 2nd in the final stages.

So, Mercs won the war, but Ferrari had their best threat for a good while, and while the P3 was ultimately bittersweet, there’s some positives that they can take away from it all. Now, if I’m honest, on paper, I can see why Ferrari made that call. They said themselves they had no idea how well the Mediums would perform. Mercs have won 32 out of the last 38. You’re not going to beat them in a straight dogfight, so why not roll the dice with what you do know?

Sure, it was too aggressive, and in this instance in the context of current F1 and dirty air, track position was king today, but that’s just how it goes sometimes. I understand Ferrari’s call on this one, even if it wasn’t the best on the day. I think with people, it’s easy to criticize, but hindsight is also the world’s ultimate double edged sword. Not to mention, this was the first race with [fusion_builder_container hundred_percent=”yes” overflow=”visible”][fusion_builder_row][fusion_builder_column type=”1_1″ background_position=”left top” background_color=”” border_size=”” border_color=”” border_style=”solid” spacing=”yes” background_image=”” background_repeat=”no-repeat” padding=”” margin_top=”0px” margin_bottom=”0px” class=”” id=”” animation_type=”” animation_speed=”0.3″ animation_direction=”left” hide_on_mobile=”no” center_content=”no” min_height=”none”][fusion_tooltip title=”Which was great!” placement=”top” trigger=”hover” class=”” id=””]Pirelli’s 3-tyre strategy[/fusion_tooltip] options too.

Given how they were 36 seconds behind Mercs at this very track this last year, says a lot about their continued progress. 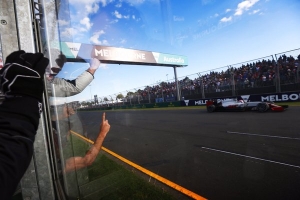 My Driver of the Day has to be Romain Grosjean. Despite their early Quali exit, they showed promise in Quali, and Grosjean was able to superbly convert that in the race, starting 19th to finish an incredible 6th, also using the 1-stop strategy that Mercs adopted from the Red Flag, and held off a big train behind, including Nico Hulkenberg, Val Bottas, and the feuding Toro Rosso’s.

For a brand new team from scratch, to finish in the Top 6 is sensational and a true testament to the work that Haas has done in such a short amount of time. A supreme effort and hopefully a sign of more to come from our American cousins. 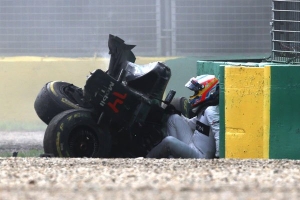 Let today be a reminder to us all that we should never stop looking for ways to improve, when it comes to safety. Esteban’s late change of direction in the braking zone in the run down to Turn 3 caught Fernando Alonso out, and he went straight into the gravel traps at 190mph, flipping the car in the process before hitting the barrier hard. Luckily, both he and Esteban were completely unharmed. The crash itself was very reminiscent of the won Martin Brundle suffered, and the crash in 2001 between Jacques Villeneuve and Ralf Schumacher, that tragically killed track marshal Graham Beveridge.

In this case, the wheel tethers did their job, and as much as the talk went straight back towards the recent Halo discussion, my concern is shifting more towards gravel traps. After Max and Carlos had enormous barrier hits without them in Monaco and Russia respectively, and were relatively okay, should we still use gravel traps when they so often flip cars in the air, like Danill Kyvat at Suzuka last season? I think that’s a discussion we should have.

I just wish for two things: One, to stop using crashes as harrowing as this as justification/no justification for the Halo discussion, and two, stop saying asinine statements like: “We need danger as a thrill in F1” or “We need to punish drivers who make mistakes.” That kind of attitude I think has gotten to the point where it’s unhealthy, and today was a reminder as to why I believe keeping an open mind is the way to keep this discussion moving forward in a positive light. 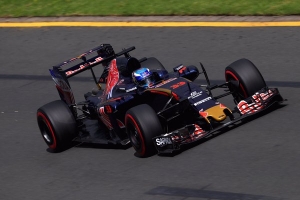 Oh man, not a good day at the office for Max Verstappen’s temperament. He went crazy in the cockpit in regards to not being allowed to move in front of teammate Carlos Sainz as he tried to get around the long running Jolyon Palmer. In fact, Max lost his shit, swearing repeatedly at his engineer.

Now, I can’t lie, Max has definitely gotten his [/fusion_builder_column][fusion_builder_column type=”1_1″ background_position=”left top” background_color=”” border_size=”” border_color=”” border_style=”solid” spacing=”yes” background_image=”” background_repeat=”no-repeat” padding=”” margin_top=”0px” margin_bottom=”0px” class=”” id=”” animation_type=”” animation_speed=”0.3″ animation_direction=”left” hide_on_mobile=”no” center_content=”no” min_height=”none”][fusion_tooltip title=”(See Singapore 2015 on that one)” placement=”top” trigger=”hover” class=”” id=””]fair share of the spoils[/fusion_tooltip] since he rocked up in F1, but for all those bashing his attitude in the car… 1) Every driver complains. 2) He’s 18, what the hell are you expecting? I was seeing people three years younger than him take the moral high-ground on Max, despite the fact that he’s 18 and driving an F1 car at 200mph. I personally have an 18 year old brother. He’s an arrogant ass. Many people our age are, acting like they rule the world. I know I did. So for me to criticize the young man’s attitude would make me a hypocrite. I think more of us need to look in the mirror before being so quick to judge.

Dre’s Race Rating: 8/10 (Excellent) – Really great season opener and one of the best Australian GP’s in recent memory, and a race that really had everything. Pirelli and their new 3-tyre allocation worked really well in its first practical run, and it’s what made the story of the race, and the tense nature of it down the stretch. Some great passing too from the Toro Rosso’s, Palmer, Bottas, and more. Hopefully, we get a few more like this down the road. See you in Bahrain![/fusion_builder_column][/fusion_builder_row][/fusion_builder_container]