“If Formula 1 had a ‘friend zone’, Nico Hulkenberg would be its walking embodiment.”

If you told the average Motorsport fan that a man was an A1GP Champion, a Formula 3 Champion, and won the GP2 World Championship as a rookie before his 22nd birthday, you’d be mistaken for thinking he would have probably had a top F1 seat by now, especially as said driver turns 28 in August, right?

Nico Hulkenberg, and his career to date is one of the most curious entities I’ve seen in my time as a Motorsport fan. Without a question, he was one of the greatest Motorsport prospects we’ve ever seen, winning everything on the ladder to F1, but his career once he got there has been lacklustre for a man of his talent. This is his fifth full-time season, and he has still yet to grace the podium, as he’s taken a hat-trick of midfield team side-steps, from Williams, to Force India, to Sauber, and back again, never breaking the glass ceiling of hooking up with a team that’s capable of challenging for wins. 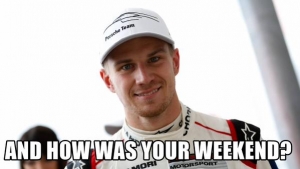 [/fusion_imageframe]Nico was thrust back into the limelight this past weekend, with the high level of publicity of being an active F1 driver to enter Le Mans with the Porsche Factory LMP1 team, and he had a decent weekend – He only went and bloody won the damn thing, a spectacular performance alongside Earl Bamber and Britain’s own Nick Tandy, the first time Nico had won a race or even felt a podium since winning the GP2 feature race of Portugal back in 2009. An astonishing statistic given his now, even more dazzling resume outside of F1.

It makes you wonder, why has Hulkenberg missed out on a top seat in his F1 career so far? And should he be considering a permanent WEC move in the midst of his Le Mans victory? And is the Le Mans win going to punch his ticket to a factory F1 seat?

It’s not like Nico hasn’t been considered for these seats before. He was the top target for Ferrari in 2014, until Kimi Raikkonen’s lack-of-pay situation and sudden availability became a thing, with Luca di Montezemolo changing his mind at the 11th hour and going with the then, Lotus superstar.

He was also considered when McLaren found out they were losing Lewis Hamilton to Mercedes in 2012, according to Paddy Lowe, who instead, went with Sergio Perez, hailed as the next big thing after 3 shock podiums for a surprisingly competitive Sauber team that season. He was also overlooked when Lotus was considering buddying up with the totally legitimate Quantum Motorsports, but stuck with Pastor Maldonado for… [/fusion_builder_column][fusion_builder_column type=”1_1″ background_position=”left top” background_color=”” border_size=”” border_color=”” border_style=”solid” spacing=”yes” background_image=”” background_repeat=”no-repeat” padding=”” margin_top=”0px” margin_bottom=”0px” class=”” id=”” animation_type=”” animation_speed=”0.3″ animation_direction=”left” hide_on_mobile=”no” center_content=”no” min_height=”none”][fusion_tooltip title=”*cash register jingle*” placement=”top” trigger=”hover” class=”” id=””]reasons[/fusion_tooltip]. *cash register jingle* Even more brutal when you consider, Pastor was the reason Nico was booted out of Williams at the end of 2010 in the first place. 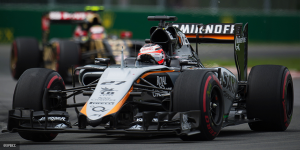 [/fusion_imageframe]Nico has been known for not being particularly well funded, as well as being just darn unlucky, because at the time when decent seats are available, someone else is either riding the crest of a wave, or the money becomes a factor, a key part of running a midfield team in F1 these days. Heck, there’s talk this season about him potentially going to Ferrari for 2015, as Kimi Raikkonen’s form gets more questionable, but he’s seemingly going head-to-head with Valtteri Bottas, who was 4th in the Championship and one of the breakout stars of the 2014 season, scoring six podiums. Hulkenberg, head-to-head, isn’t the “sexy” pick, given Bottas’ rise through a resurgent Williams team, the “proof of concept”, that a top team would vouch for. Amazingly, in this scenario, Hulk would be the “gamble”.

Nico couldn’t have done much in F1 given the hands he’s been dealt. The only driver battle he lost, was to Rubens Barrichello, a driver with 20 years more experience, given Nico was a rookie in 2010. And to be fair to him, he stole the show in Brazil with that astonishing wet pole position.

Also, his height has been mentioned as a potential problem. At 6’1”, he’s the tallest driver in the current field, and that can be an issue for engineers. But my response to that is: “Did it stop Mark Webber from being an elite F1 driver, and winning 9 races?” No, so for me, that’s hogwash. The best get around those hindrances, like Red Bull did.

Now, I’m not saying Nico’s under-rated, I know I’m one of many who believe in the man’s ability and some of his awesome performances, and he has some critics too, for not dealing with Sergio Perez more handily now at Force India. A lot of fans value the more landmark performances, like Perez’s podium at Bahrain last year, and his 3 Sauber podiums in 2012. 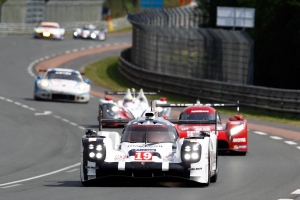 [/fusion_imageframe]But for me, the proof is in the pudding. Give the man a decent car, he will step up and deliver consistent, good performances. Last season, he scored nearly 100 points and was in F1’s Top 10, despite being in the field’s 6th best car.

The Porsche Le Mans win was yet more proof of that. To be the first active F1 driver to win since Johnny Herbert in 1991, he’d fit right into that #19 Porsche and could be a huge Endurance star if he wanted, the kind of driver the series needs. So why not make the full-time switch?

Simple, he could probably do both right now. The World Endurance Championship only has an eight round calendar, and Nico filled in for Le Mans and Spa, a quarter of the season, under permission from the savvy Force India team. As much as the WEC has become the hipster’s favourite weapon to bash F1 in a desperate bid for alternatives in the eyes of many, it’s not even close to F1 in legacy or current value. And heck, given the average age of the field, Nico could have an entire F1 career and come back as a free agent in the aftermath, something Fernando Alonso and Jenson Button has considered doing, especially now. I mean, have you seen that McLaren-Honda?

The WEC is not just suddenly going to be a viable alternative bridge just because Nico won there, and with Force India clever enough to market their star driver (as risky as that is), they have a unique double situation here, especially given the WEC only clashes with an F1 weekend twice during the season. There’s absolutely zero reason to drop F1 for it. He can viably do both.

In any case, this was another awesome example of Nico showing off his immense talent on a large scale. Le Mans is arguably the greatest, most prestigious race in the world. Unfortunately, in the world of F1, politics that wouldn’t look out of place on “House of Cards” and corporate management, it doesn’t really mean anything. Johnny Herbert won at Le Mans in 1991. The previous year, Martin Brundle won, and neither of their careers blew up afterwards.

Sadly, I doubt Maurizio Arrivabene is going to suddenly see the light, off the back of this win. I’m not taking anything away from Nico’s incredible effort, but we need to pump the breaks just a little bit on this one in terms of WEC-related hot-takes, and future F1 prospects. But, but by some miracle, if it gets him that factory seat I feel he deserves, I and a lot of other people, would be delighted to see what he can do at the very highest level. Because for me, he belongs, but you have to wonder, just how much more does he have to do to get there?[/fusion_builder_column][/fusion_builder_row][/fusion_builder_container]