Don’t you just hate it when something happens that immediately makes your previous blog completely invalid? Thanks Nico Rosberg, now I gotta do this s*** again!

The whole previous post I made was about the whole “Hamilton vs Rosberg” feud being mostly smoke and mirrors, a feud that wasn’t really there, but the media, desperately trying to stir the pot into making this situation more than it should be… 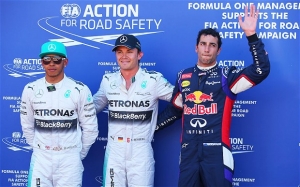 [/fusion_imageframe] For those living under a rock and hasn’t seen it yet, with about 2 minutes to go in Q3, Nico Rosberg made a mistake through Casino Square and into Mirabeau, locked up heavily and abandoned his lap by going into the escape road, reversing back onto the track a few moments later. As a result, they pulled out the yellow flag as Hamilton came through, effectively ending the session for him, and everyone else on track.

Rosberg really rubbed salt in it by celebrating his pole afterwards, Hamilton looking visibly pissed afterwards, refusing to shake hands with his team mate, and generally looking like someone’s been refused a second helping of cake from the pantry.

After the race, Hamilton was despondent stating that he was “on a pole lap”, and his relationship with Rosberg was “essentially” like Senna and Prost’s, “I don’t know if Senna and Prost sat down and talked it out… I quite like the way Senna dealt with it, so I’m going to take a page out of his book.”

Nico came out and apologized afterwards for accidentally robbing Hamilton of another opportunity to beat his lap time, but Hamilton didn’t even have a response. It looks like his bad feelings of being shafted have boiled over. 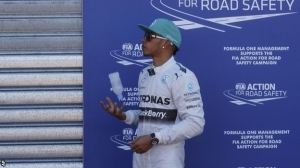 [/fusion_imageframe]So, was Rosberg’s actions deliberate or not? Hard to say. A lot of people seem to super-analysing the footage, saying that he made awkward steering motions before Mirabeau and whatnot. To be honest, for me, it’s inconclusive. A lot of folks are making comparisons to Michael Schumacher’s stunt at Monaco in 2006 for essentially pretending to lose control at 14mph at Razz Cazz, this one isn’t anywhere near as clean cut. I don’t think there’s a valid argument “beyond reasonable doubt”, either way. And if you can’t prove it for sure, you have to let it stand.

As much as it’s REALLY easy to slander Hamilton for sulking like my sister does, he does have a right to be a little bit peeved. Through no fault of his own, he has robbed of a chance at pole, and what’s worse is that his team mate was the one to do it, even if it was accidentally…

So, where do we go from here? I suspect Hamilton will get his head down and get down to business tomorrow, channelling his Senna disciple like nature going by his post-race interview. Is that a good thing though, I wonder? I’ve always thought that Hamilton is at his weakest when he lets his emotions get in the way, and that’s when he’s at his most vulnerable. See the entire 2011 season for more evidence of that, when he multiple dramatic tangles with Felipe Massa over the course of the season, in places like Monaco, Singapore and India. 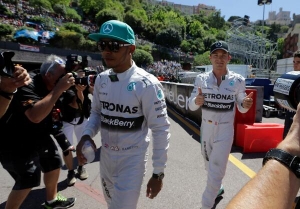 [/fusion_imageframe]To me, this is all the microcosm cult of Lewis Hamilton. He’s the biggest and most recognisable star in the sport today, and as a result, it comes with a media circus. From his high profile girlfriend, his night life, his other relationships, and as a result, the British media, so desperate to see him succeed again. And given the fan reaction on Twitter, with many fans attacking Nico Rosberg on Twitter, with racist and death threats, it goes to show you that many fans are so deep into that Hamilton cult and fanboyism, that it negatively affects the sport on the Internet. I feel bad for Nico, didn’t break a rule proven by the FIA, and gets attacked simply for making a minor mistake.

This was a minor incident, enhanced by the aggressive Hamilton fans on the Internet and the British media. This was a golden carrot for Sky Sports, they had been dying for something like this to happen. I switched Sky off early after Johnny Herbert was actively trying to stir the pot SUPER bad and using irony to try and talk up the possibility of a Hamilton/Rosberg feud. Like I said, this was a golden carrot for Sky, because now they have all the material they need to hype this up now. If you were tired of Sky constantly talking up Hamilton now, get used to it, it’ll be happening even more now.

Tomorrow will be the most exciting day of the F1 calendar since opening morning. It’s a shame it’s over the politics and the personal drama, more so than what’s on the track, but hey, anything to get people talk…Heck, you just read a 900 word blog on the subject. You must be just a little curious to see what happens between the two Mercs, right? See you then.[/fusion_builder_column][/fusion_builder_row][/fusion_builder_container]