Hamilton vs Rosberg 2: When Good Men Go To War

“Demons run, when a good man goes to war.”

Who’d have thought the most incredible part of the Belgian Grand Prix would be a post-race debrief? Silly season isn’t just to do with driver transfers it seems.

If you still haven’t seen it, Lap 2 of the GP had Rosberg try an ambitious outside pass into Les Combes, and as Hamilton shut the door like he had every right too, there was contact made between Rosberg’s front wing, and Hamilton’s left rear tyre, causing a puncture and damaging Rosberg’s endplate. Hamilton’s race was effectively over and Rosberg would go onto finish 2nd. The Stewards deemed it a “racing incident” and didn’t even choose to investigate it. 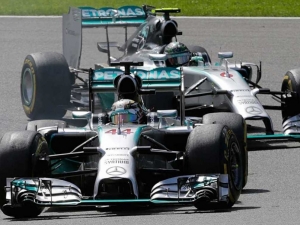 [/fusion_imageframe]This was a weird one. I think it was worth looking at, at the very least. For the record, I feel like Rosberg had more of the blame here, in that he could have braked and conceded the corner and avoided the contact, despite Hamilton leaving it a tad close on the “You have to leavey the space” Alonso rule. I can definitely see an argument for Rosberg getting a drive-through, but I think that’s only because Hamilton took a puncture. If that hadn’t have happened, no-one would be screaming drive-through and we’d all just move on with it. Should that change because Hamilton was unlucky? You be the judge.

What I will say though, is that the fans of F1 need to be a little more consistent here. Hamilton had two collisons in Germany which were deemed okay, Alonso drove into the back of Vettel yesterday, no big deal, but Rosberg does the same and everyone throws him under the bus? Welp.

[/fusion_imageframe]The main talk was after the Grand Prix. Toto Wolff looked HEATED, and in post-race interviews with the BBC said that Rosberg shouldn’t have passed with a “knife between his teeth” so early on, and pretty much threw Rosberg under the bus, Niki Lauda doing the same, blaming Rosberg 100%. Rosberg was boo’ed on the podium for seemingly robbing the British travelling fans of a race for the lead (Because y’know, that’s the only to have an exciting race these days), and Rosberg even called them out afterwards. Rosberg denied being labelled as “the bad guy”, and claimed the media of Mercedes drivers respective countries would make up their own minds and lean one way or the other.

The Social Media storm really kicked off after the grand prix, when Lewis Hamilton leaked to the print media, what happened in a private debrief, and made the audacious claim that Rosberg had initiated contact with him ON PURPOSE. It got worse when Jennie Gow confirmed that by speaking to a Mercedes representative, that they confirmed what he had said was true.

Twitter went into MELTDOWN. Rosberg was immediately labelled a cheat. Everyone was calling for the FIA to step in and take Nico’s head off for being excessively dangerous and had every derogatory word under the sun thrown at him. We all called for bans! Carnage! Mayhem! Rosberg’s child turned out to be a doppel-ganger! Dogs and Cats living together, mass hysteria!

But then, Toto Wolff and Nico Rosberg came out with their own statements on Autosport that went rather under the radar as everyone was still responding to Hamilton’s accusations. Rosberg declared the crash a “Racing Incident”. Toto Wolff came out again and said the possibility of Rosberg hitting him was “Nonsense” and that Hamilton “misconstrued” what Rosberg had said, “Agreeing to disagree” on what happened.

[/fusion_imageframe]And here we are now. 18 hours after it happened and for the most part, the dust has settled. Where the heck do we go from here though? The Hamilton/Rosberg relationship was already strained, it must be in tatters now if Hamilton genuinely believed that Nico hit him on purpose… But did he?

Throwing my hat into the ring here… No, I don’t think he did. Nico Rosberg is an incredibly intelligent driver, one of the smartest int he field. Has a degree in engineering. Speaks 5 languages. He had to have known that making contact on the back of Lewis’ car is a hail mary and if there was no puncture, he’d be losing out due to the front wing damage.

So, on the other side of the coin, you have Hamilton, who snitched to the press on what had happened. No matter what why you cut it, he’s also to blame here. He let an internal matter within a team spill over to the public. Like, where’s the upside here? If he wanted Rosberg punished because of a deliberate incident, he could go to the FIA in private. Not leak to the press media and attract bucket-loads of unnecessary attention for a team, that’s already had to deal with one ugly team spat at Monaco, and for being hypocritical over team orders in Hungary.

You have to wonder, has Hamilton stirred the pot to paint Rosberg like the villain here? If he has, it’s worked. As I said, Rosberg got boo’ed on the podium, the social media consensus was PURE vitriol towards Rosberg, and given Hamilton’s been the unluckier of the pair in terms of reliability and “luck” this season, people are going to gravitate towards making him the underdog, not to mention Lewis himself has arguably the biggest and most devoted fan support in the field today. In the court of public opinion, Rosberg’s going to be persecuted here. 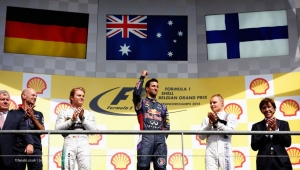 [/fusion_imageframe]Either way, the team has been dropped into a real pickle here. I think generally, they dealt with Hamilton and Rosberg’s first spat at Monaco pretty well, but this time, Toto Wolff was in a sympathetically nasty situation, especially post de-brief. Either he labels one of his drivers a cheat, or he labels the other one as a liar. Either isn’t a good situation, and paints you in a bad light as a principal when you throw one of your drivers under the bus like that. And the worst part is, the team can’t really do anything about it. Say they blame Rosberg like Toto did originally and bans him for a grand prix… The team then gets accused of rigging the championship and favouring another one of their drivers. It’s a minefield where one wrong PR step and you blow the leg off half your fans. I don’t envy them at all here?

Of course, for the media, this is another golden carrot for them to dine on. Seven rounds to go, and we get another Monaco and a re-ignited blood feud that refuses to die. And dare I say it, that’s a good thing. At least it’s not last year where about this time, Vettel was setting up to run away with it. If you’re not a fan of either driver like I am, this is incredibly exciting and entertaining.

However, we as fans need to wise up, read both sides of the story and get a better idea before we all start throwing the shade. Our Social Media hype over this is the exact reason this story blew up more than it should have done in the end. And I think a lot of us got it wrong for that very reason. 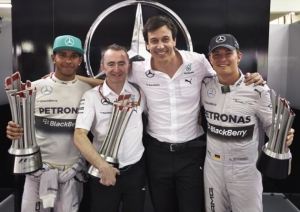 [/fusion_imageframe]Ultimately, your perception of this whole messy situation comes down to who you want to believe and how you interpret the bag of snakes that have been dropped on your lap. Do you believe Nico’s line of it being a racing incident? Toto’s silly mistake and Hamilton getting it wrong? Or do you believe Lewis in that Rosberg hit with intent? You have to draw your own conclusion really.

Me? This was a racing incident blown up by past history and the instant gratification that comes with Twitter and getting news as quickly as possible, even when the full story isn’t in the air. I will say though, that Abu Dhabi season finale definitely sounds more intriguing now doesn’t it? Got some thoughts? Comment below, and thanks for reading.

PS: All I know is, I think from here on in, Nico Rosberg is the new Dark Knight of Formula 1 seizing the mantle from Sebastian Vettel. Because after all: “You either die a hero, or live long enough to see yourself become the villain.”, right?[/fusion_builder_column][/fusion_builder_row][/fusion_builder_container]